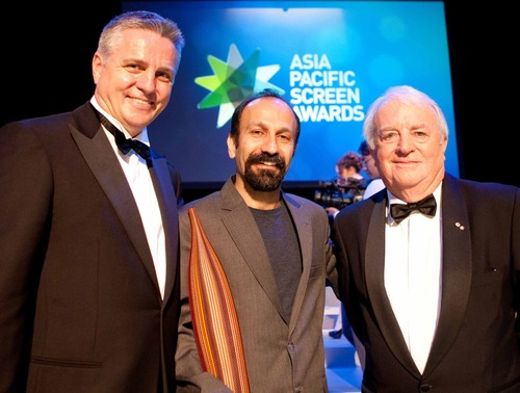 Australian film website Inside Film wrote that “a three time APSA winner, Farhadi’s role as Jury President marks the fifth APSA ceremony of which he will be a part and the first time an Iranian filmmaker serves as President of the APSA International Jury. The renowned writer/director is one of the only filmmakers to receive APSA nominations for three different films across the seven-year history of the event and his films have received an impressive ten nominations in total.”

“APSA truly cherishes the ongoing relationship with filmmakers such as Asghar Farhadi, whose incredible body of work has grown alongside APSA. It is with great pleasure that we welcome Asghar Farhadi back to APSA and to Australia as the President of the International Jury. As an APSA nominee, award winner, film fund winner and Academy member, he is unparalleled in his association with and understanding of the Asia Pacific Screen Awards. We greatly look forward to announcing the remaining members of the jury who will join Mr Farhadi,” said Michael Hawkins, Chairman of the Asia Pacific Screen Awards.

Speaking from Tehran, Asghar Farhadi said ‘‘I am very proud of my long association with APSA and am very much looking forward to fulfilling the honourable role of President of the Jury for 2014. It is truly special to be able to celebrate the outstanding cinema of the Asia Pacific region, which produces half of the world’s film, and it will be both a pleasure and a challenge to determine the 2014 APSA winners with the International Jury in Brisbane in December.”

In 2010, Farhadi was one of four recipients of the inaugural MPA APSA Academy Film Fund for his film Jodaiye Nader Az Simin (A Separation), which went on to win the Golden Bear at the 2011 Berlinale, and both the 2012 Golden Globe® and 2012 Academy Award® for Best Foreign Language Film. A Separation won the 2011 APSA for Best Feature Film and was also nominated in the categories of Best Screenplay, Achievement in Directing, and Best Performance by an Actor for Peyman Maadi.

The Awards, supported by Brisbane City Council and managed by economic development board Brisbane Marketing in a unique collaboration with Paris-based UNESCO and FIAPF—International Federation of Film Producers Associations, recognise and promote cinematic excellence and cultural diversity of the world’s fastest growing film region: comprising 70 countries and areas, 4.5 billion people, and responsible for half of the world’s film output. In 2013, 39 films from 22 countries and areas received award nominations.