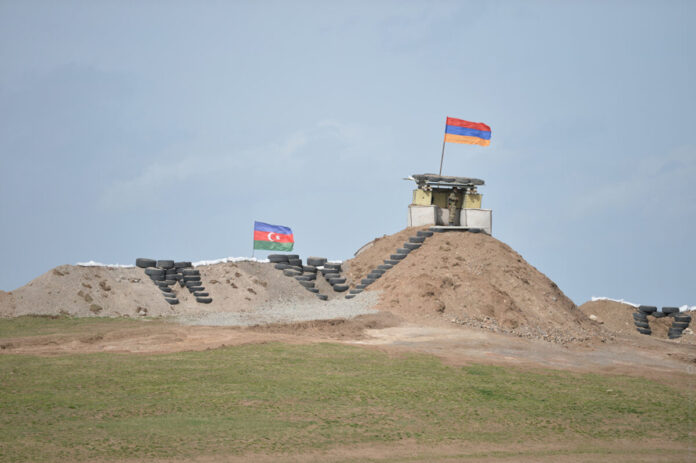 The situation at the Armenian-Azerbaijani border, where a shootout was earlier reported, is relatively calm, Yerevan has announced.

“As of 19:00 local time, the situation at the eastern section of the Armenian-Azerbaijani border, where Azerbaijani troops attempted an advance earlier today, was relatively calm. No shootouts were reported. Negotiations are underway. The are no casualties on the Armenian side,” the press service of the Armenian Defense Ministry said.

According to the ministry, reports circulated in social networks that Azerbaijani armored vehicles advanced into Armenia’s territory are not true.

The Armenia’s Defense Ministry stated earlier in the day that at around 13:00 local time, Azerbaijani troops attempted an offensive in the eastern section of the Armenian-Azerbaijani border and plunged into intensive exchange of fire.

Negotiations to settle the situation were mediated by the Russian side, it added.

The Azerbaijan’s Defense Ministry has said on Sunday it has foiled the Armenian side’s attempt to concentrate troops and vehicles to the Lachin section of the border between the two countries.

“In the morning on November 14, Azerbaijani army units observed the concentration of Armenian troops and vehicles near the Lachin section of the border. Azerbaijani army units deployed in this direction took immediate measures to prevent another provocation from the Armenian side. <…> As a result, Armenian soldiers were forced to leave this territory,” it announced.

According to the ministry, the situation is controlled by the Azerbaijani Army.

The ministry recalled that the Armenian side had made an abortive attempt to deploy around 60 soldiers to the Lachin border section and called on Armenia to stop such provocations.

“It is yet another evidence that the Armenian side is not interested in the delimitation and demarcation of the state border between the two countries by means of talks,” the ministry stated, adding, “The entire responsibility for the consequences of the confrontation at the Armenian-Azerbaijani border will rest on Armenia’s military political leadership.”

The Azerbaijani Defense Ministry said on November 10 that some 60 Armenian soldiers had been closed off while trying to make a lodgment at the Lachin section of the border. Later, they were released at the request of the Russian side.

The conflict between Armenia and Azerbaijan over the highland region of Nagorno-Karabakh, a disputed territory that had been part of Azerbaijan before the Soviet Union break-up, but primarily populated by ethnic Armenians, broke out in February 1988 after the Nagorno-Karabakh Autonomous Region announced its withdrawal from the Azerbaijan Soviet Socialist Republic. In 1992-1994, tensions boiled over and exploded into large-scale military action for control over the enclave and seven adjacent territories after Azerbaijan lost control of them. Talks on the Nagorno-Karabakh settlement have been ongoing since 1992 under the OSCE Minsk Group, led by its three co-chairs – Russia, France and the United States.

Renewed clashes between Azerbaijan and Armenia erupted on September 27, 2020, with intense battles raging in the disputed region of Nagorno-Karabakh. On November 9, 2020, Russian President Vladimir Putin, Azerbaijani President Ilham Aliyev and Armenian Prime Minister Nikol Pashinyan signed a joint statement on a complete ceasefire in Nagorno-Karabakh. Under the document, the Azerbaijani and Armenian sides stopped at the positions that they had held and Russian peacekeepers were deployed along the engagement line in Nagorno-Karabakh and along the Lachin corridor that connects Armenia with the enclave to exercise control of the ceasefire observance. Apart from that, a number of districts came over to Baku’s control.