Small incidents on the sidelines of a big event 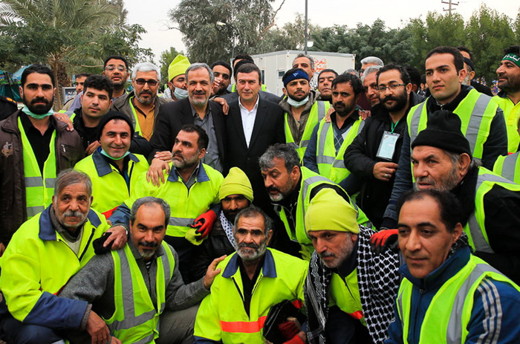 According to vital records, the holy city of Karbala witnessed more than 700 births and up to 154 deaths during Arba’een ceremonies.

This year Iraq required no entry visa from Iranian pilgrims as they streamed in to take part in ceremonies to mark Arba’een, forty days after Ashura: the climax of mourning functions for Imam Hussein, the grandson of Prophet Muhammad, who was martyred in Karbala more than 13 centuries ago. Iraqi officials have said that they have registered more than 800 life events, including 704 births and 154 deaths, during the days-long ceremonies.

The Cultural Heritage News Agency (CHN) on December 15 quoted Iranian officials as saying that as many as 1.2 million pilgrims entered Iraq for the religious occasion, but Governor General of Karbala Province Aqil al-Tarihi put the number at closer to 1.5 million. The following is a partial translation of what else the governor general had to say in a meeting with Ahmad Masjed-Jamei, a member of Tehran City Council:

Except for religious tourists from Iran, about 65,000 people from Arab nations and 13,000 from non-Arab countries, including five Brazilians, were among pilgrims in Karbala.

Visiting the holy shrine of Imam Hussein this year was somehow different from previous years, because Karbala served as a meeting point of Shiites from all over the world.

More importantly, the ceremonies were given extensive media coverage in the world because they coincided with the victories of the Iraqi army and volunteers against ISIL terrorists.

We thank Tehran Municipality for sending more than 3,000 urban service workers to Karbala to offer services to pilgrims.

Up to 704 women went into labor in the city hospitals and as many as 154 people died, among other things because of cardiovascular conditions and car accidents.