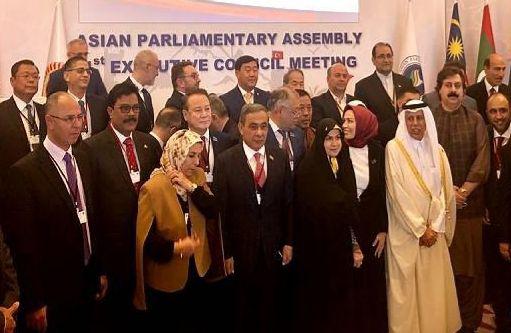 The 1st Executive Council meeting of the Asian Parliamentary Assembly (APA) has come to an end after four days in the Turkish city of Rize.

In an address to the closing ceremony of the meeting, head of the Iranian delegation Fateme Zolqadr said, “The Asian Parliamentary Assembly’s family has now become bigger and more diverse, because Qatar and Timor-Leste have fully joined the assembly.”

She also extended a warm welcome to the Consultative Assembly of Qatar and to East Timorese National Parliament, congratulated them on membership in the Asian Parliamentary Assembly, praised the APA members for active participation in the Executive Council discussions, and lauded the APA Secretariat for its professional approach and commitment to the assembly’s main goals.

The Iraqi Parliament was initially short-listed for the presidency of APA for 2020-2021, but after extensive talks about the Asian Parliamentary Assembly’s presidency, it was decided that Turkey would continue its presidency until December, so that Iraq could take over the presidency after the 12th APA Plenary and after restoration of stability in the Arab country.

Moreover, the Consultative Assembly of Qatar expressed readiness to host and chair the meeting of the Standing Committee on Economic and Sustainable Development.

Led by Fateme Zolqadr, the Iranian parliamentary delegation attended the meeting of APA’s 1st Executive Council, held in Turkey’s coastal city of Rize for the purpose of promoting cooperation and sharing experiences with Turkey.