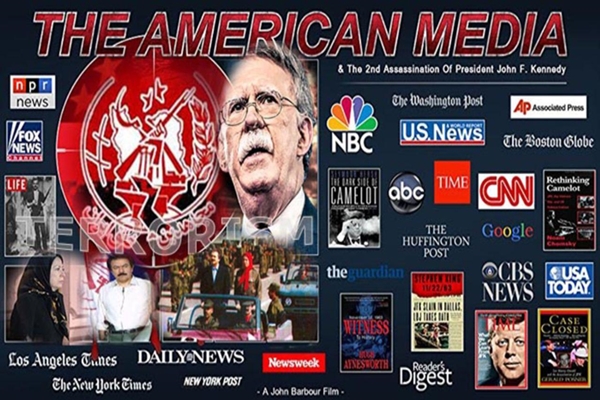 The MKO terrorist organisation is spreading Iranophobia by making inroads on certain lobby groups inside the US administration, an Iranian newspaper says, warning US President Donald Trump about consequences of being influenced by such groups.

The MKO terrorist organisation is a militant and political group that teaches suicide attacks, and in the past have committed self-immolation, and even held demonstrations in front of international bodies to disrupt Iran’s relations with other countries.

Now, such opportunities in the present situation in the region are used to create conflicts and unwanted battles between Iran, the United States and other countries of the region. They want to turn this into a battlefield to topple what they called the “Iranian regime” to secure their own interests.

Editor-in-chief of Etemad newspaper’s online website, Mojtaba Hosseini, has in a recent piece argued that the terrorist group, which Iran says has killed over 17,000 people so far, is using lobby groups inside the US administration to trigger a war against Iran.

Here is the full text of the article by Hosseini:

The conditions of the region and the constant developments, as well as the publication of controversial news by global sponsors has made the issue very complicated and strange. In order to understand what is going on in the wake of all these developments and conflicts, it is enough to evaluate and analyse the publication of the news by the media networks affiliated with world powers.

The New York Times’ news of deployment of 120,000 US troops to the region in May, which was widely covered by US, European, Arab, domestic and Persian-speaking media abroad, was among the news that were basically fake. However, this fake news was immediately published by Reuters, Voice of America and the French Radio to fan the flames of war against Iran.

The coverage of a fake news by the American, European, Arabic and Persian-language media continued until Donald Trump explicitly announced the news of the deployment of 120,000 US troops to the region was false.

The monitoring of such news and information in the current situation clearly shows that there are active elements with a specific strategy in these media who are after turning these domestic and foreign news agencies into their own news station.

The management of information and media alerts is carried out in an organised way by the United States, Israel and the neighbouring countries of the region against Iran.

This suggests that an intelligence unit opposed to regional security and the national interests of Iran and the United States, which considers itself to be a rival to the United States and the party which wants to overthrow the current ruling body of Iran, is carrying out destructive operations.

The actions of terrorist militants in sabotage operations against UAE ships and Katyusha attack near the US embassy in Baghdad were steps to wage a war between Iran, the United States and the countries of the region; a war to lead to downfall of the Islamic Republic.

The MKO terrorist organisation is the main culprit behind such actions. They are a militant and political group who teach suicide attacks, and in the past they have committed self-immolation, and even held demonstrations in front of international bodies to disrupt Iran’s relations with other countries.

At the moment, such events in the present situation in the region are used to create conflicts and unwanted battles between Iran, the United States and other countries of the region. They want to turn this region into a battlefield to topple the so-called “regime” of Iran to achieve their own interests.

If the Americans want to resolve their problems with Iran, first, it is better to resolve their problems with their international rivals without putting Iran in the middle of the story. Secondly, in order to better understand the conditions in Iran, it is necessary to close the file of such groups as the MKO. At the same time the Americans must look at them as a threat that challenge their security and intelligence.

The MKO’s sabotage, espionage, and intelligence services are not exclusive to Americans; they have done the same for states like France.

Accordingly, it’s enough for the Americans to read a little bit of history and recall how once they were the target of their number-one source of information:

Of course, the anti-US measures of the organisation are not only these five cases. They even asked for the interrogation of US embassy personnel in 1979. However, their request was turned down by the Revolution Council. The organisation also called for extradition of the Shah, cutting off of relations with US imperialism, stopping the export of oil to the United States, and abolishing all political-economic and military agreements with the United States. It also disclosed the CIA and SAVAK spy networks in Iran, and stressed that outright anti-authoritarian and anti-imperialist policy must be mentioned in the constitution.

Americans should answer the following questions: why the MKO, which is currently playing the role of the intelligence agent of the B-Team, even after leaving Iran did not seek shelter in the US, and instead chose France as their command centre to launch campaign against the Islamic Republic?

Don’t the Americans know the MKO has initiated an uninterrupted communication with representatives of the socialist and communist parties of Europe, at the same time, to secure their political life to find a way to gain power in Iran through the world powers?

Have the US authorities forgotten that when the MKO returned to France, Masoud Rajavi and other leaders of the organisation did not withdraw from their anti-American positions and uttered swearwords against US Ambassador William Sullivan who condemned the assassination of Ayatollah Beheshti?

Have the Americans been able to understand the root cause of the total change of organisation’s approach towards Washington? Is it possible that the Americans have not understood the reality of the war between Iran and Iraq and the loss of the organisation’s assassination machine in the Mersad Operation was the main reason for Masoud Rajavi change of mind and the MKO’s anti-imperialist and anti-American slogans?

If the Americans read a little bit about Iran’s recent history, it will be well known that the MKO, based on its mission in Europe, apparently put aside its leftist approach and became a friend of the United States. The organisation’s strategy with this goal was launched and the new values of the organisation were announced by its leadership: “We as a revolutionary force benefited from the conflict between imperialism and the reactionary (Islamic Republic) to achieve power!”

The funny point was that the leadership of the organisation had already said to its members and sympathisers that the Islamic Republic should be destroyed to eliminate imperialism. But then argued that to destroy the Iranian ‘regime’ they must get help from imperialism!

Although the Americans did not immediately accept the organisation’s change of approach, but eventually some Republican senators, who had good connections with the French Social Democrats, propagated this argument that “the enemy of my enemy is my friend,” and therefore the MKO, which was on the list of US terrorist groups, was supported and used by Americans as one of its service providers. The presence of figures such as John Bolton and Rudy Giuliani at the annual MKO conferences was in line with such a policy.

The MKO, by paying money to people like Bolton and Giuliani, is making inroads in the US Congress and State Department, spreading Iranophobia by fabricating news. They are also trying to impose themselves on Americans as a powerful, efficient organisation and an alternative to the Islamic Republic.

Undoubtedly, the ruling administration of the United States, especially the White House, is subject to great deception. This great deception can be seen from the very moment that the organisation and Maryam Rajavi condemned Trump’s decision to relocate the US embassy to Jerusalem. The organisation’s opposition to Trump’s decision was in line with France’s interests, and perhaps this behaviour implies that the MKO still gets its main services from countries such as France, which, for historical reasons, still defines Palestine in its sphere of influence.

If Trump pays attention to the statements of Iran’s Leader on July 30, 2018, in which he named France and Britain as the parties receiving the organisation’s services, he will understand that the MKO terrorist organisation has provided more services for the US international rivals including French and European socialists rather than the US itself.

This may be enough to let Trump know that his foreign policy body with people like John Bolton is playing in MKO’s court.