Anti-Iran sanctions will be removed 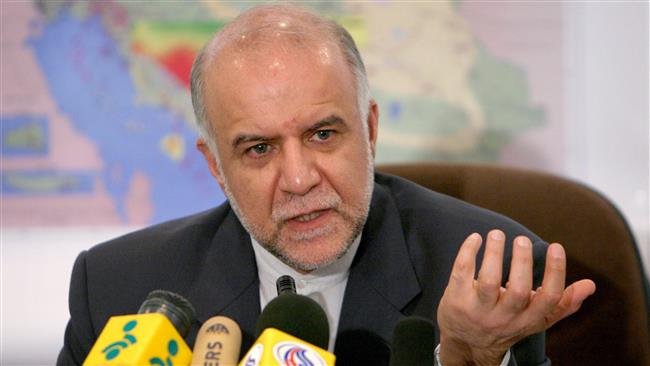 The Iranian oil chief has said that the government and its nuclear negotiators have always been under the auspices of the Supreme Leader whose “expediencies and guidance” will help rid the country of sanctions.

Iran’s oil minister says that the nation will be relieved of sanctions with the expediencies of Leader of the Islamic Revolution Ayatollah Seyyed Ali Khamenei.

Bijan Namdar Zanganeh made a reference to a recent speech by Ayatollah Khamenei on Iran’s nuclear talks with P5+1 and said that the Leader’s speech entailed positive effects for national interests and the other party also received the message.

Zanganeh added that the Iranian administration and its nuclear negotiators have always been under the auspices of the Leader whose “expediencies and guidance” will help rid the country of sanctions.

Iran’s oil chief made the comments at a rally in the capital Tehran on the anniversary of the country’s 1979 Islamic Revolution.

Regarding the recent oil price plunges, Zanganeh said such fluctuations could not have a single explanation and will have to be dealt with over time according to their repercussions.

Ayatollah Khamenei had said on Sunday that Iranian nuclear negotiators are making efforts to secure the removal of hostile sanctions against Tehran during their discussions with the six-party group.

In order to reach a nuclear accord with P5+1, the Islamic Republic has currently suspended 20-percent uranium enrichment as well as the development of centrifuges and nuclear facilities in Arak and Fordow, said the Leader, adding that Tehran has acted logically in the course of the negotiations.

The Leader further pointed out that Iran would rather not have any nuclear agreement with P5+1 than pen a bad deal which runs counter to the interests of the nation.