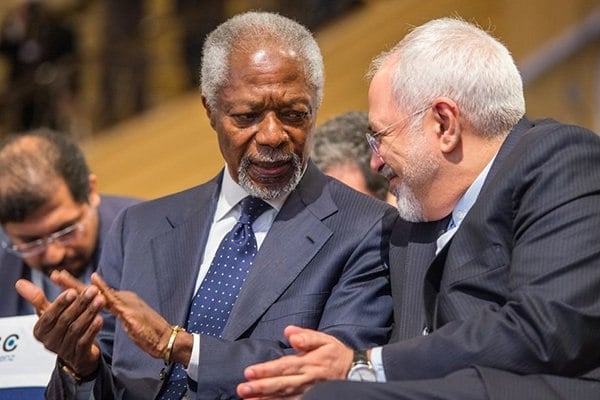 Iranian Foreign Minister Mohammad Javad Zarif has expressed his deep regret over the death of the former UN Secretary General Kofi Annan, praising his efforts to promote peace and multilateralism across the world.

In a Sunday message on the demise of Annan, Zarif said his tenure at the UN was replete with initiatives and measures which will make his name everlasting in people’s minds across the world.

The Iranian top diplomat then referred to the political and professional carrier of the late ex-secretary general and described his term in office as one of the most brilliant eras of the UN.

According to Zarif, during his term, Annan made great strides in establishing international peace and security, strengthening multilateralism and paying serious attention to the situation of the southern states.

Also in a Saturday tweet, the Iranian top diplomat said he was “extremely saddened” by the passing of his old friend Kofi Annan, describing him as a “towering global leader and an unwavering champion for peace, justice and rule of law.”

Annan, the first black African to lead the United Nations, died at the age of 80 on Saturday. He served as Secretary General at a time when worries about the Cold War were replaced by threats of global terrorism.

Annan, who was born in Ghana in 1938, served as the seventh UN Secretary General, from 1997 to 2006, and was the first to rise from within the ranks of the United Nations staff.

He had also been a member, since 2007, of The Elders, a humanitarian group of a dozen leaders and activists of worldwide stature formed by Nelson Mandela. In 2013, Annan became its chairman.