An Iranian official says a number of antiquities belonging to the third millennium BCE have been discovered and reclaimed in southern Iran in an anti-smuggling operation.

Prosecutor General of Jiroft, Hossein Salami, told IRNA that after carrying out a series of intelligence operations by the IRGC forces of Kerman Province, it was revealed that smugglers were determined to traffic an invaluable cargo of antiques.

When the Prosecutor’s Office was informed about it, he added, the issue was put high on the agenda, and a team of the IRGC intelligence forces was deployed to the region.

He underlined that among the objects discovered things such as a crescent blade, a bronze plaque, a bronze ring, a three-part metal object, a stone button, and a conical metal object could be seen. 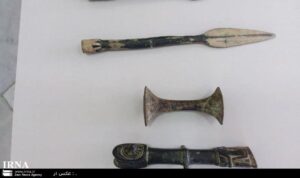 The discovery of such historical objects in the city of Jiroft reveals the ancient civilization, culture, and history of the region, and the protection of this historical heritage is necessary for everyone, added Salami.

He further mentioned that this is the third discovery of antique relics in the past few weeks in the city of Jiroft adding that so far, a total of 28 pieces of such relics have been seized.

Meanwhile, the Intelligence office of Khuzestan province announced the discovery of 908 antique items in the province.

The smugglers were supposed to transfer the antiques to a European country, and so far a few of them have been arrested.