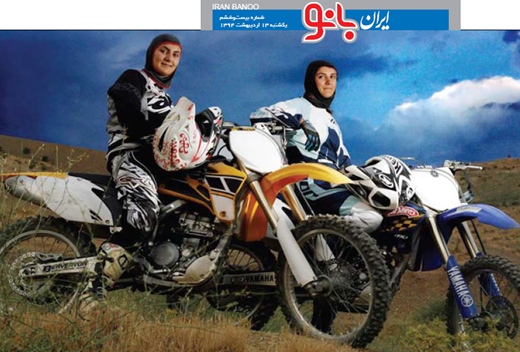 The story of a girl who has done great in a male-dominated sport.

It is an exciting experience to see female motocross* racers in their outfit ready to hit the road, dirt road that is. These women have good physical skills and great courage. Despite carrying an official permit from the Motorcycle and Automobile Federation, these women are not allowed to attend national competitions or go to the MX tracks at Azadi Stadium. But they can’t wait for a day when female motocross races are officially recognized in Iran.

Iranbanou, a supplement of Iran newspaper, has covered the story of Noora Naraghi and her mother Shahrzad Nazifi who practice together at a motocross track. It looks as if interest in motocross runs in the family since Nora’s father – Mehrshad – is a motocross champion. Noora is Iran’s first female champion [in 2009, she won Iran’s first-ever female championship in motocross] and has acquired a certificate in coaching from the US. The following is the translation of excerpts of the story:

The mom of the family credits her interest in motocross to her love for her husband, saying she first pursued the sport out of fun. She says Mehrshad started to train their two kids when they were four. “I’ve always encouraged my children to continue motocross as long as their practices don’t come at the expense of their education”.

The family’s son found his way to the national team, but his mom and sister weren’t allowed to hit the track for training.

Noora’s first shot at motocross came at the age of 4. Her dad is her trainer and she does other sports such as ping pong, volleyball and swimming just for fun. She says cycling and bodybuilding are a big help for racers.

She says although motocross is expensive, she has paid for it out of her own pocket. Noora has competed in a race along with Ashley Fiolek [a profoundly deaf professional motocross racer and the Women’s Motocross Championship in 2008, 2009, 2011, and 2012], saying Ashley can be a good model for female Iranian riders.

She says motocross is one of the most exciting sports. Noora hopes national competitions – when held – increase the number of women with an interest in the sport. She says performing acrobatic stunts [while jumping motocross bikes] is a variation of motocross [Freestyle Motocross] and should not be tried out on the streets.