All the deadlocks of Obama 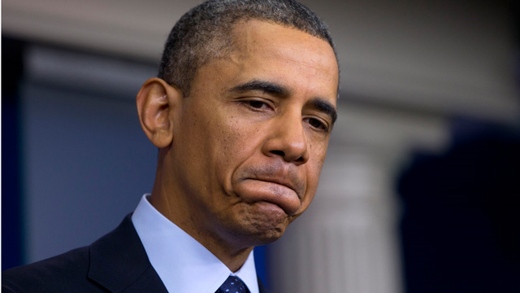 Khamenei.ir analyzes in an opinion piece a possible Iran-West nuclear deal and the fact that – unlike Iran – the US would benefit from even a bad deal.

White House officials will in fact lose the Geneva deal in case no agreement is struck [between Iran and P5+1]. Such failure will see the Geneva deal become history. The Supreme Leader’s stress on the need for inking a one-phase [nuclear] deal has caused the American plot to procrastinate the talks to hit a deadlock.

The following is the translation of part of an opinion piece by Hossein Mizan published by khamenei.ir on February 15:

One month before the June 2009 elections [in Iran], Barack Obama, the 44th US president wrote a letter to the Supreme Leader asking him to try to open a new chapter in relations between the US and Iran. In the letter, Obama admitted that no issue in West Asia could be settled without Iran’s aid and presence. […]

In February 2013, Obama wrote another letter to the Islamic Revolution leader, expressing his country’s readiness to clinch a bilateral agreement on Iran’s nuclear program. […]

What is the reason behind the correspondence? If Iran is not in a good state – as the US officials claim – how come the US president sends a letter to Iran’s highest-ranking political official and appeals for help?

Perhaps one reason can be found in “Obama legacy”. […] Without fail, one reason the American historiography pays special attention to Ronald Reagan [the 40th] US president [1981–89] is his role in ending the Cold War which was one of the gravest US foreign policy crises. […]

So far Obama is among a few US presidents who have not left behind a legacy in which he and his fellow Democrats can take pride down the road. Of course he does not have much time left to create such a legacy. Thus, many believe that Obama’s legacy can be the diplomatic settlement of the Islamic Republic of Iran’s nuclear case. […]

There’s every indication that failure by Democrats to ink a deal with Iran could bring them down from the pyramid of political power for eight years. This comes as the occupants of the White House praise the Geneva deal as a big achievement of the Obama presidency, claiming that they have managed – thanks to this agreement – to stop the progress of Iran’s nuclear program after years.

Barack Obama proudly said in a recent interview with Vox [an American news website run by Vox Media] that the progress of Iran’s nuclear plan has been brought to an end in the course of 11 years of nuclear talks. Thus the American side seems to direly need the Geneva deal. The continuation of the talks or – at least – maintaining the Geneva agreement is what the US needs in order to advance its agenda at home and abroad.

What’s more, Americans badly need Iran’s help to solve regional problems. The fight against ISIL in Syria and Iraq, Lebanon’s political situation, recent political developments in Yemen and many other Gordian knots which are unfolding in the Middle East can be undone only by Iran […]

The question of Iran’s cooperation with the US for the settlement of its regional woes was categorically rejected by the Islamic Revolution leader. So a breakdown in nuclear talks will aggravate the strategic crises the US is facing in the region.

In reality, American efforts to show that Iran has lost ground in nuclear talks come at a time when US authorities or the Democrats – to say the least –are engaged in a life-and-death struggle the result of which hinges on conclusion of a nuclear agreement with Iran. […]

A while ago, [David] Cohen [the US Department of Treasury undersecretary of terrorism and financial intelligence] claimed that the Iranian economy is in a condition which basically cannot rebound unless Iran signs a nuclear deal with the West, and this has given the US more leverage in final talks with Iran.

Regardless of what has been already said – which fundamentally rejects Cohen’s claim – such viewpoints are met with strong opposition even inside the United States. Tony Blinken, the US Deputy Secretary of State, has recently said that sanctions were not what brought Iran’s nuclear program to a halt; rather a nuclear agreement with Iran has simply stopped such activities. […]

Despite rhetoric by Obama, Kerry, Cohen, etc. the US need for talks or at least keeping the Geneva agreement in place far exceeds that of the Iranian side. So walking away from the negotiating table by the US will spell the collapse of the talks. In case a breakthrough is not achieved [in the talks], the US officials will practically lose the Geneva deal and it would become history.

The US strategy used to show itself in efforts to re-extend the talks and buy time in order not to lose the Geneva deal. But the Supreme Leader’s remarks last week and his stress on a one-stage agreement which encompasses both general and detailed outlines put the Americans in a quandary. The Leader has also ruled out a multi-phase agreement as well as a [general] diplomatic agreement before agreeing on the details.

Boastful remarks by Kerry and Obama’s recent bragging all indicate that their prospective plans for reaching a general, yet half-finished, agreement – something which failed to serve the national interests of the Islamic Republic of Iran and only served the interests of the US, especially those of Democrats – have all been foiled.

The order of the Supreme Leader on a one-phase deal has targeted the Americans’ Achilles’ heel. Undoubtedly, a unique opportunity has opened up for Iran’s nuclear team to persevere and reclaim the rights of the Iranian nation and ask for the removal (not suspension) of sanctions once and for all.

It is no secret today that for Obama, his colleagues and fellow Democrats, a bad deal is better than no deal.