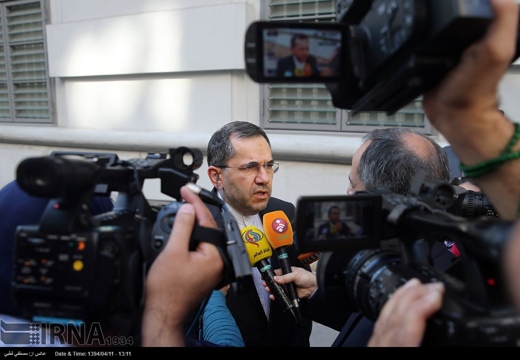 Iran’s Deputy Foreign Minister for Euro-American Affairs Majid Takht-e Ravanchi insisted that all sanctions imposed against Iran over its peaceful nuclear porgram must be lifted as part of a comprehensive nuclear agreement.

This is one of the important issues that we have been insisting upon resolving from day one as we consider these sanctions being unjust and illegitimate, Takht-e Ravanchi said while speaking to media representatives on the sidelines of the nuclear negotiations in Vienna.

Asked about the UN Security Council sanctions, Takht-e Ravanchi said, ‘When we will reach the implementation day all the past resolutions of the UNSC will be terminated. A number of sanctions have been adopted by UN and they are not mostly economic-related sanctions. We are in discussion as to what would be the next step as far as the UNSC sanctions are concerned.’

Takht-e Ravanchi stressed we are hopeful that the job could be done over the next couple of days provided the other side is making the necessary decision to get the job done as soon as we can.