A woman shines in a male-dominated job 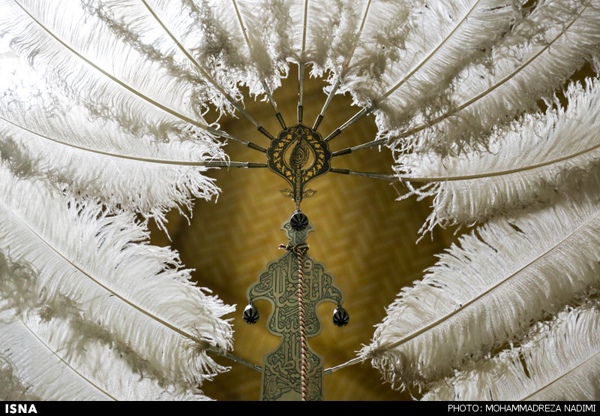 When my works are sent to experts for evaluation, they find it difficult to believe that such works have been created by a woman, she says.

Fatemeh Eidiyoun is a 29-year-old Iranian woman who has followed in the footsteps of her father to make designs and engravings on alams (heavy metal installations covered with intricate figurines and engravings used in public Shiite mourning ceremonies).

In other words, she implements calligraphy and creates different images, including scenes of the epic battle of Karbala as well as flowers and birds on metal frameworks.

The Iranian Students’ News Agency has held an interview with her to find out why she has chosen a job which is typically male-dominated. The following is the translation of part of the report the news agency released:

As for how she does her job, Eidiyoun said, “After a metal framework is made, I engrave the designs on it before blanketing them with a combination of ink, lac and alcohol. After the ink goes dry, I immerse the framework in a mix of water and acid. Acid cannot penetrate the parts which are covered by lac and alcohol, but it does dissolve unprotected parts. As a result, the designs appear in relief when the frame goes dry.”

She said that the art is not well known, because it has not been registered yet, adding, “I can put it under the heading of metal arts, but I need to collect documents from old artists about the history of this art. I have put together some, including old photos from religious centers and museums.”

Eidiyoun said that she did not know the oldest artist who started this type of engraving, but it can be traced back to an artist based in the city of Isfahan who was involved in this profession about 80 years ago.

The artist added, “My father did the same job for about three decades before he passed away seven years ago. I was brought up a father heavily involved in this profession, that’s why I developed an interest in this.”

She went on to say that because it is a male-dominated job, her husband takes all the orders and delivers the final works.

The female artisan further said, “When my works are sent to experts for evaluation, they find it difficult to believe that such works have been created by a woman. No woman has done this job so far and because I inherited the art from my father, I am the only woman who does this.”

Eidiyoun has a Grade Three art certificate [presented by the Ministry of Culture and Islamic Guidance to artists] and can easily secure a Grade One certificate if she can have the art registered. She seeks to apply for the registration of the art to the Cultural Heritage, Handicrafts and Tourism Organization.