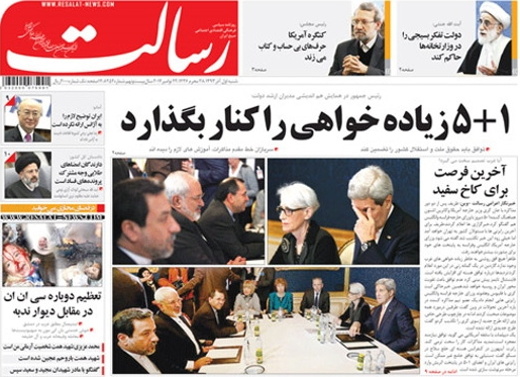 An editorial by an Iranian daily says Iran-P5+1 nuclear talks are nothing complicated and to solve the dispute a simple method is needed.

Resalat newspaper in its editorial on November 22 focused on the complexity, or rather lack thereof, associated with the ongoing nuclear talks, stressing that talks over Iran’s nuclear program are originally part of a simple problem which requires a simple solution, but that other factors have complicated the negotiating process. The following is a partial translation of the editorial:

The multiple-variable equation emerging in the talks is not the direct result of an innate complexity of the nuclear talks, nor is it because of extraterrestrial or metaphysical factors!

“Complexification of nuclear talks” is a process spearheaded by the West in three areas: “Official diplomacy”, “Public diplomacy” and “Secret diplomacy”.

That a simple equation has turned into one with multiple variables is not the consequence of a hard riddle; rather, it has been created as a result of the complex role played by those involved in the talks.

[As the talks are coming closer to their end,] negotiators may encounter the following in the remaining days: “total breakdown of the talks”, “conclusion of a final deal”, “finalization of an interim deal identical to the Geneva Agreement”, and “an agreement on general outlines”.

As things stand, the first two options seem out of the question. On the one hand, P5+1 believes that it is far from logical to walk away from the talks now that they have made some breakthroughs, and on the other hand, preconditions needed to reach a final, detailed deal are practically impossible to meet.

Excessive demands by Washington and failure of P5+1 to make up their mind in a real, diplomatic way to guarantee the conclusion of a final deal are largely to blame for the suspenseful state of affairs.

This situation has pushed the last two options into the game. In other words, “a reason for extension”, and not the extension itself, will be the main dividing line between Vienna talks (the one prior to the first deadline back in July) and the current negotiations (ahead of the second deadline on November 24).

This cuts both ways. On the upside, it would offer a bigger chance [to Iran] to concentrate more on gaps and not to get excited in dealing with the West (the party with excessive demands in the talks).

On the downside, however, it would create fissures in nuclear talks and produce fresh frictions. More importantly, failure by the US to make a crucial decision coupled by feet-dragging on the part of Washington and its fellow P5+1 members – which keeps them stuck in the talks which were held ahead of a first deadline – clearly indicates that they are not yet ready to accept the inalienable rights of the Iranian nation. Under these circumstances, Iran’s lack of confidence in P5+1 is growing progressively.

The sway the ill-intentioned regional and international players hold with what is going on in the nuclear talks explains why the parties involved still remain split and why members of P5+1 are trying to put a spanner in the works.

There are glaring examples which reveal the true colors of the players who have sat around the negotiating table facing Iranian diplomats, among them: A recent backchannel warning by Saudi officials to Paris that Riyadh would decrease its arms purchases from France in case a nuclear deal is signed with Iran; extensive consultations between the Zionist regime and US officials; and [the formation of] a European troika trying hard to prevent the conclusion of a deal with Iran.

In the meantime, other factors are also responsible for the creation and continuation of the current state of affairs: the passive role Russia and China play in the talks, and in some cases Moscow’s deterring role in resolving the outstanding questions such as the way Iran’s basic needs are to be met and the way the UN Security Council sanctions [against Iran] should be lifted (something which arises from miscalculations by Russia and China merely seeking to serve their own interests).

At this point it is clear that the Islamic Republic of Iran should not let its guard down in dealing with ill-intentioned players in the nuclear talks.

Also, P5+1 members should bear in mind that the destructive role they play in doubting the unquestionable rights of the Iranian nation is closely watched in the court of the world public opinion.

Deep-seated popular distrust of the US and its European allies, and the serious questions [the Iranian nation] wants to put to Russia and China should be the first and foremost priority of the Iranian team when they sit down for nuclear talks.

Backpedalling from this attitude, which has been adopted based on the lofty teachings of the Islamic Revolution and comments of the late Imam Khomeini and the Supreme Leader, would prompt the other party to display more rebellious intransigence and ask for more concessions.