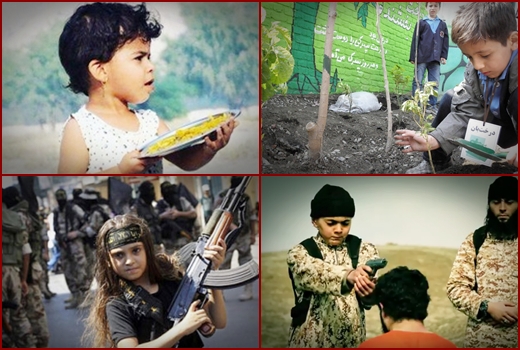 The promise an Iranian father has made to his little girl to stop hunting has caused many in their surroundings to follow suit and respect and love nature.

How children behave is usually a direct outcome of where and by whom they are trained. On December 5, Entekhab.ir released a report on training camps the IS terrorist grouping runs in Iraq and Syria to promote its ideology of death and destruction. At the same time the personal website of the Director General for Education and Popular Contribution at Iran’s Environment Protection Organization (http://mohammaddarvish.com) featured a report on how children are being taught to advance environmental causes in Iran:

IS has recently released a video that shows six very young members of the terrorist outfit executing a number of Syrian security forces.

In the images shot in the eastern Syrian province of Deir ez-Zor, scores of children are shown reciting religious texts and engaged in hand-to-hand combat.

The terrorist group had earlier said as part of a program called Lion Cubs of the Caliphate, it has begun to offer intensive military and religious training to children.

According to Syrian Human Rights Observatory some 1,100 children have been recruited as part of the program and 50 of them have been killed.

IS says these child soldiers will be the next generation of its militants.

A sure-fire recipe for elimination of Daesh

She is too young to go to school. How can an individual who is unable to tolerate a bird’s hunger decapitate someone?

That is how Mohammad Darvish, the director general for Education and Popular Contribution at Iran’s Environment Protection Organization has opened his note on his website. The following is the translation of his note:

Raheleh Mobaraki still does not go to school, but she can guarantee that the future will always turn its back on violence, like Yalda who at the age of six launched a rifle-breaking tsunami in Uramanat Villages in Kurdistan Province in western Iran.

[Ahmad Azizi a hunter from Uramanat Villages in mid February 2013 promised his daughter Yalda he would never use his rifle. What he did prompted many other hunters to break or lay down their rifles.]

Raheleh is a good-natured Iranian girl who lives in a Persian Gulf coastal area. She is from Milaki village located to the west of the southern province of Hormozgan. Milaki is one of a few Iranian villages in which well-intentioned villagers have set up a library which specializes in environmental books.

Her uncle, Ahmad Mobaraki, is a close friend of mine. He has written to me that each day his niece Raheleh keeps a portion of her food for the birds that search for food in the mesquites.

I like Raheleh and I am sure a generation that grows up so in love with nature and animals, will never spread any kind of violence in society.

This is the unique lesson of the doctrine of Environment Schools (known by their Farsi acronym JAM) and we are trying to gradually expand it to all schools across the country.

This is the doctrine according to which the 6-year-old Raheleh wants her father to put down his rifle forever because she prefers to watch the magnificent flight of birds in the sky rather than their blood-drenched bodies on the ground.

Can the prudent rearing of such a generation who is growing up with love result in human beings capable of throwing acid on people’s faces or beheading them?

Resort to profound environmental ethics amounts to a return to the roots, and people who do not forget their nobility and ethical virtues will turn to reliable and stable guarantors of peace on the earth.