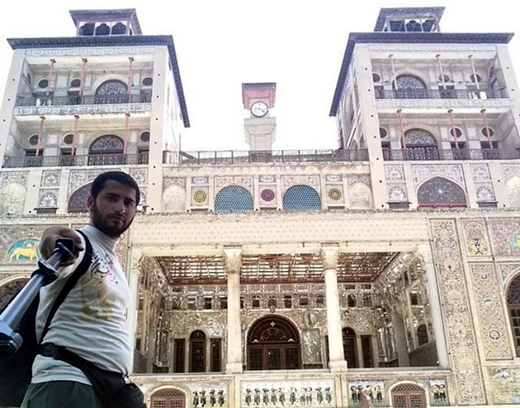 A young Iranian man makes a film of selfies he has taken at different historical sites and his video goes viral on the Internet.

A young Iranian man has traveled around the country to take selfies at historical sites and share them online with fellow Iranians.

Earlier in October Mehr News Agency published a report on a young man who has made a film of the selfies he has taken in different ancient places in Iran. The following is the translation of part of that report:

Sadegh Akbari is the director of The Iranian Selfie, a motion picture featuring a young man from Tabriz, East Azerbaijan Province, who has traveled around the country over a one-month period to take selfies at historical sites.

“I wish I will not be alive if Iran does not exit!” This half-line verse by Ferdowsi – a very prominent Iranian poet and the creator of Shahnameh [The Epic of Kings] – is what has inspired this young man. His love for Iran and touring made him strap a backpack on his shoulder this summer and set out for all provinces in Iran all by himself.

The one-minute video he has shared online [on social networking sites] is the result of his month-long trip across Iran. The Iranian Selfie narrates his visit to as many as 150 places of historical interest during 31 days.

Sadegh’s journey has come to an end a long time ago, but the toll the [long] journey has taken on the body of the young adventurer has yet to disappear.

“I love Iran and do what it takes for my country. I like to see other countries learn about the beauties of Iran,” he says.

Sadegh does not like to get help from sponsors for his works. He foots the bill for the films he produces. Sadegh wants his work to be watched at home and abroad. To that end, he is planning to present his film with English subtitles.