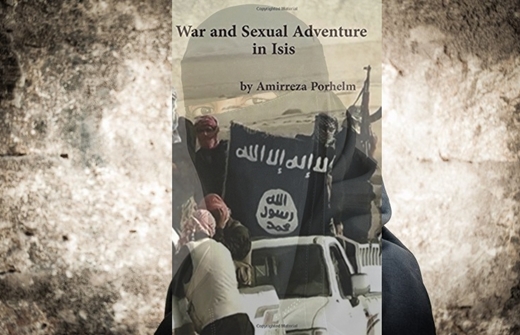 War and Sexual Adventure in ISIS – the story of women who are left at the mercy of a notorious terrorist group – has hit bookshelves at Tehran International Book Fair.

War and Sexual Adventure in ISIS, a book by Iranian writer Amirreza Porhelm, has gone on display at the 28th Tehran International Book Fair.

The book narrates the story of the Islamic State of Iraq and the Levant (ISIL) [or Daesh in Arabic term] and explains the creation of a fake Islamic State [IS] by Abu Bakr al-Baghdadi as well as the violent hit-and-run fighting of IS members in Syria and Iraq.

Khabaronline, a news website, has run a report on the 177-page book – written in English – which features the crimes committed at the hands of ISIL and its cruel treatment of people. The following is the translation of excerpts of the report:

War and Sexual Adventure in ISIS also depicts jihad al-nikah [or sexual jihad which is a controversial practice of women within some Wahhabist groups allegedly offering themselves in sexual comfort roles to fighters for the establishment of Islamic rule] and stupid love [affairs] between Takfiri terrorists and Jihadi women [also referred to as Jihad brides].

The book – which deals with those women who are lured to go to Syria to join the terrorist group – is a story of slavery and sexual exploitation of women in the fake state authorized by fatwas released by Salafi muftis.

The terrorist group’s brutal and merciless treatment of people has been also given enough space in the book.

The book has 20 chapters among them: Womanizers; The youngster battalion; Sexual Jihad uninterrupted; Marriage in stable; The city of women and bondwomen; Battle in hell; and the immediate departure to paradise.