IFP has taken a look at the front pages of Iranian newspapers on Tuesday, November 5, 2019, and picked headlines from 13 of them. IFP has simply translated the headlines and does not vouch for their accuracy.

Aftab-e Yazd:
1- Unclear Fate of Iran’s Adoption of FATF Standards
* Official: Neither Rejecting It, Nor Accepting It Is in Iran’s Interest 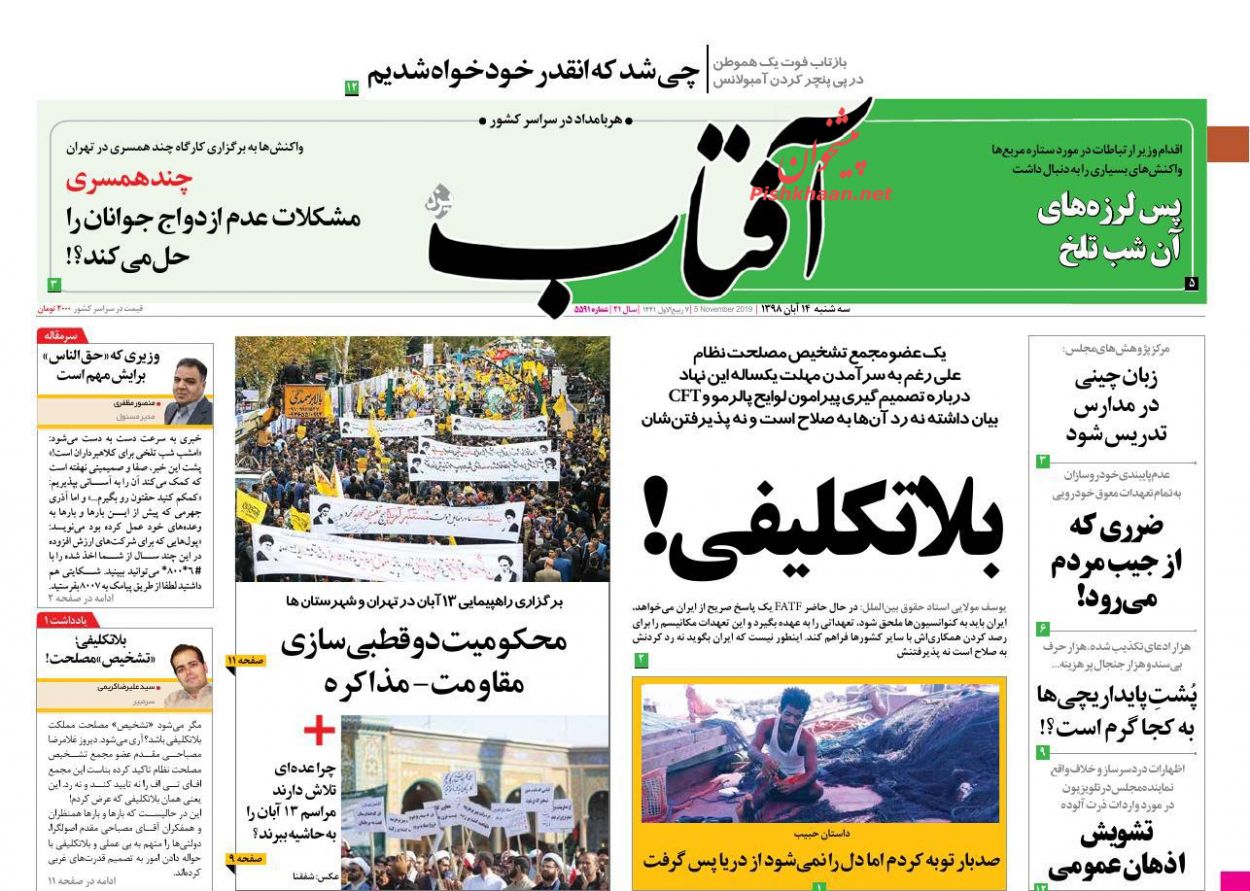 Donya-ye Eqtesad:
1- Trump’s Hollow Dream for US Dollar
* US Monetary Changes Not Favourable to President 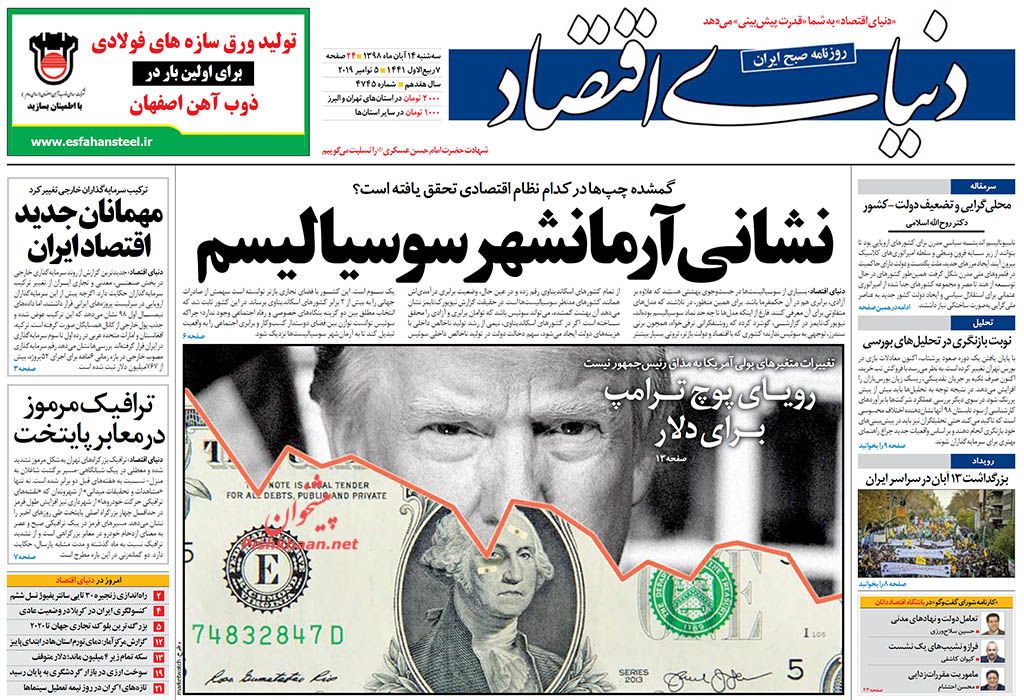 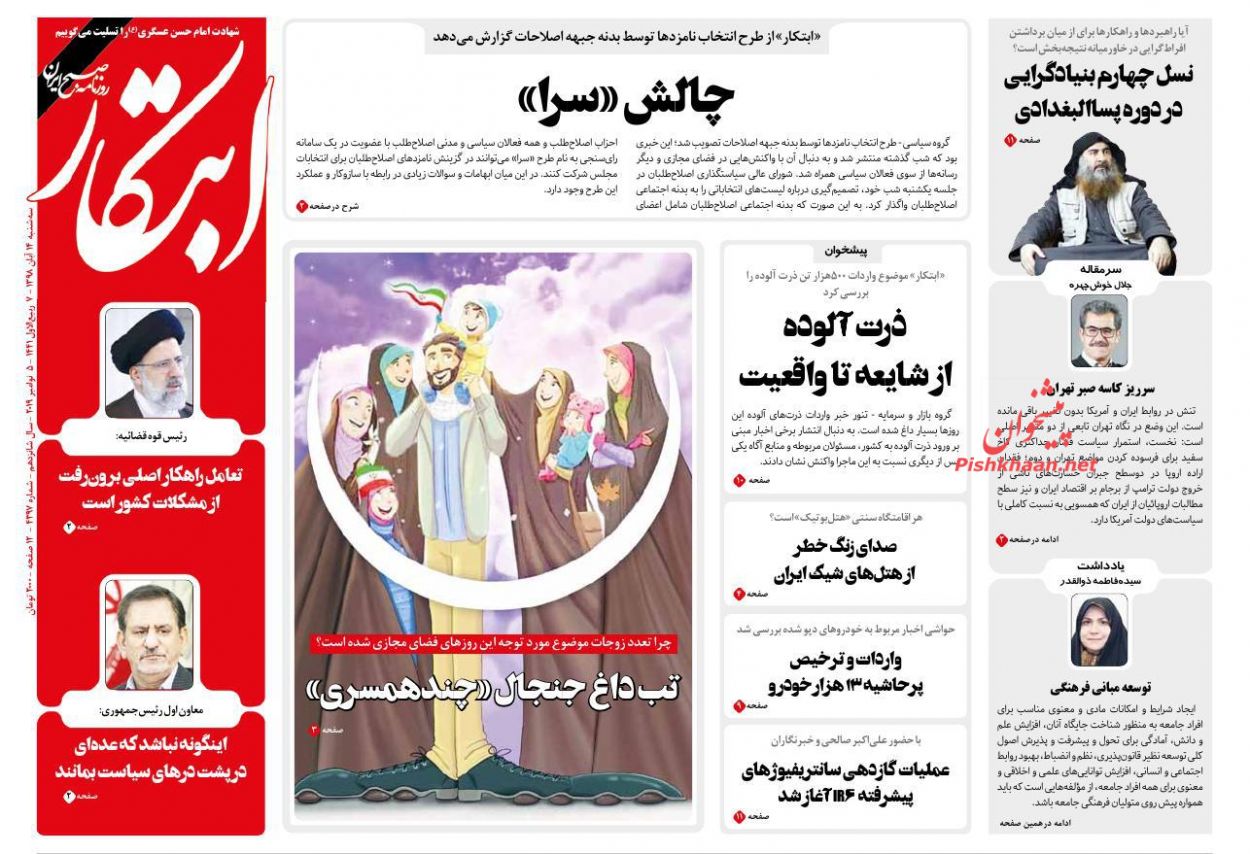 Etemad:
1- Look What We Were Before JCPOA and What We Are Now: Nuclear Chief
2- Gov’t Seeking Peace, Stability in Region
* Spokesman in Reaction to Rouhani’s Letters to Saudi, Bahraini Kings 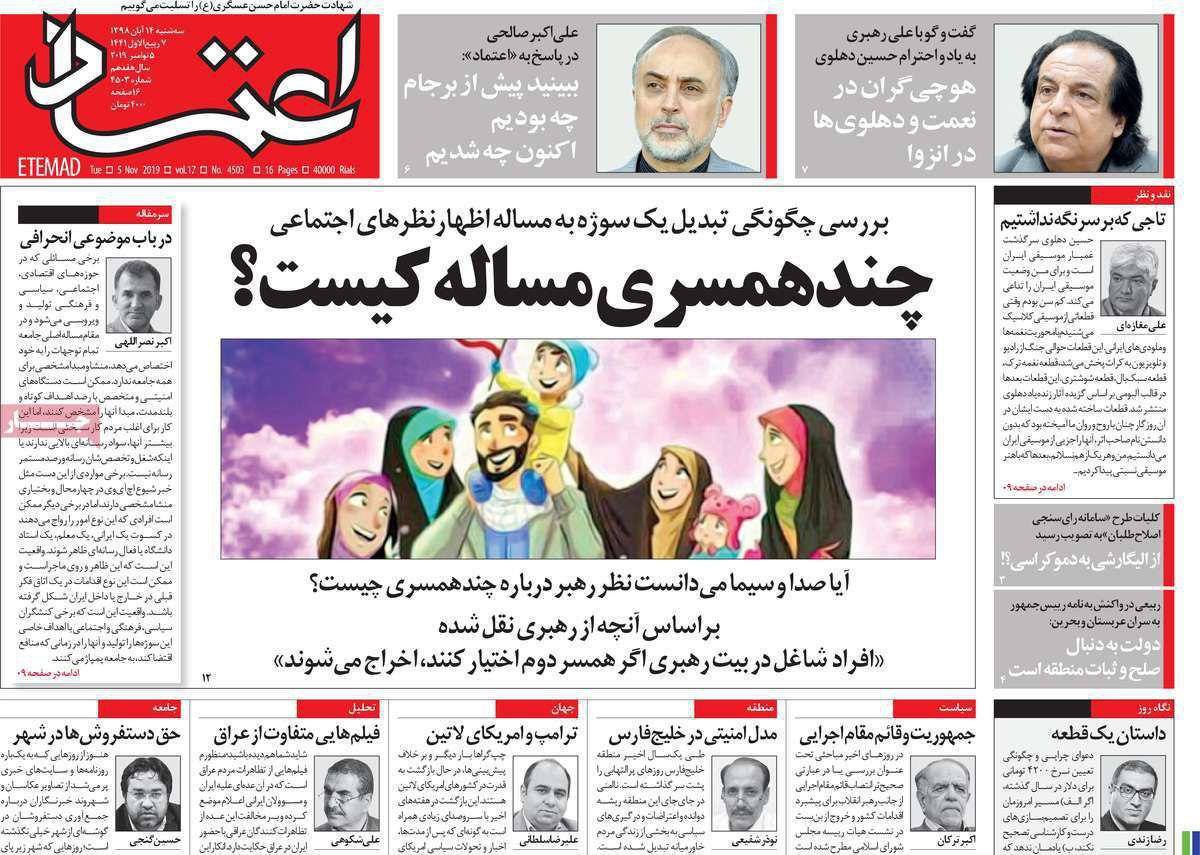 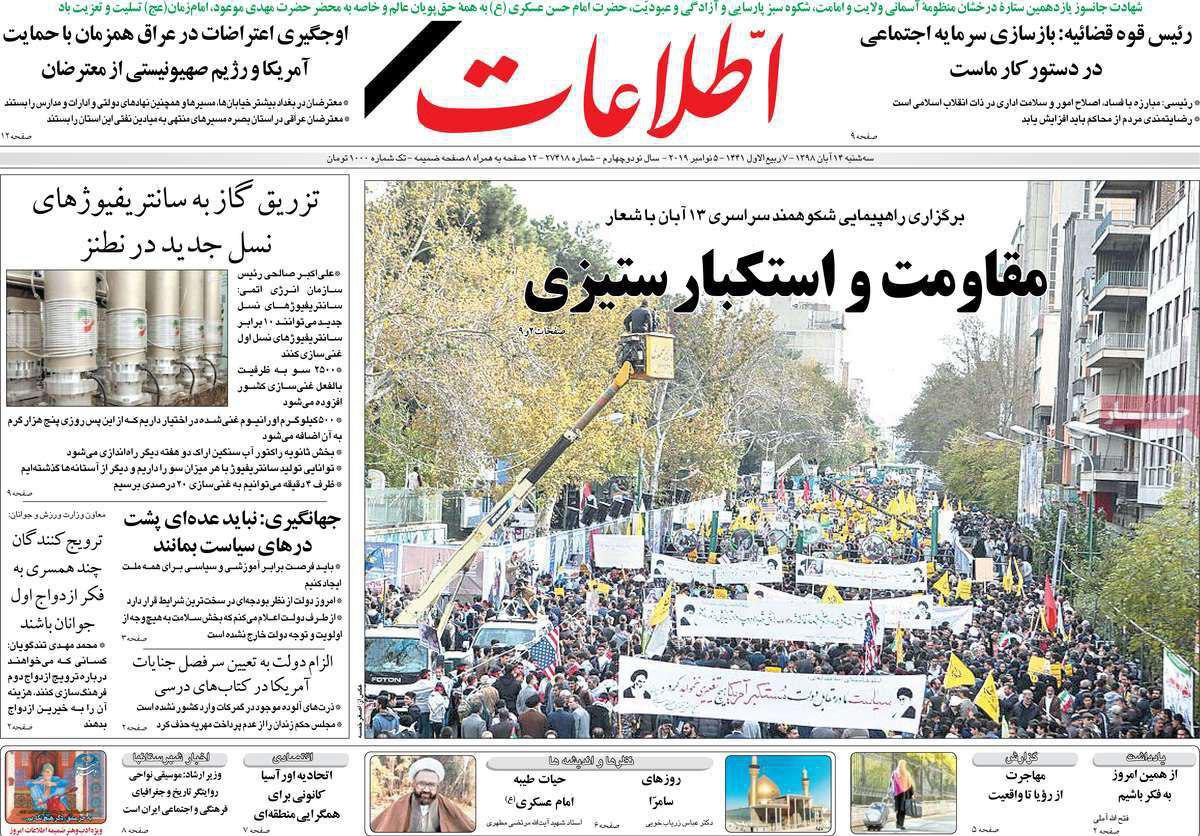 Hemayat:
1- World Without US: People Said NO to Talks with US in Massive Rallies
2- US Plot to Disintegrate Iraq 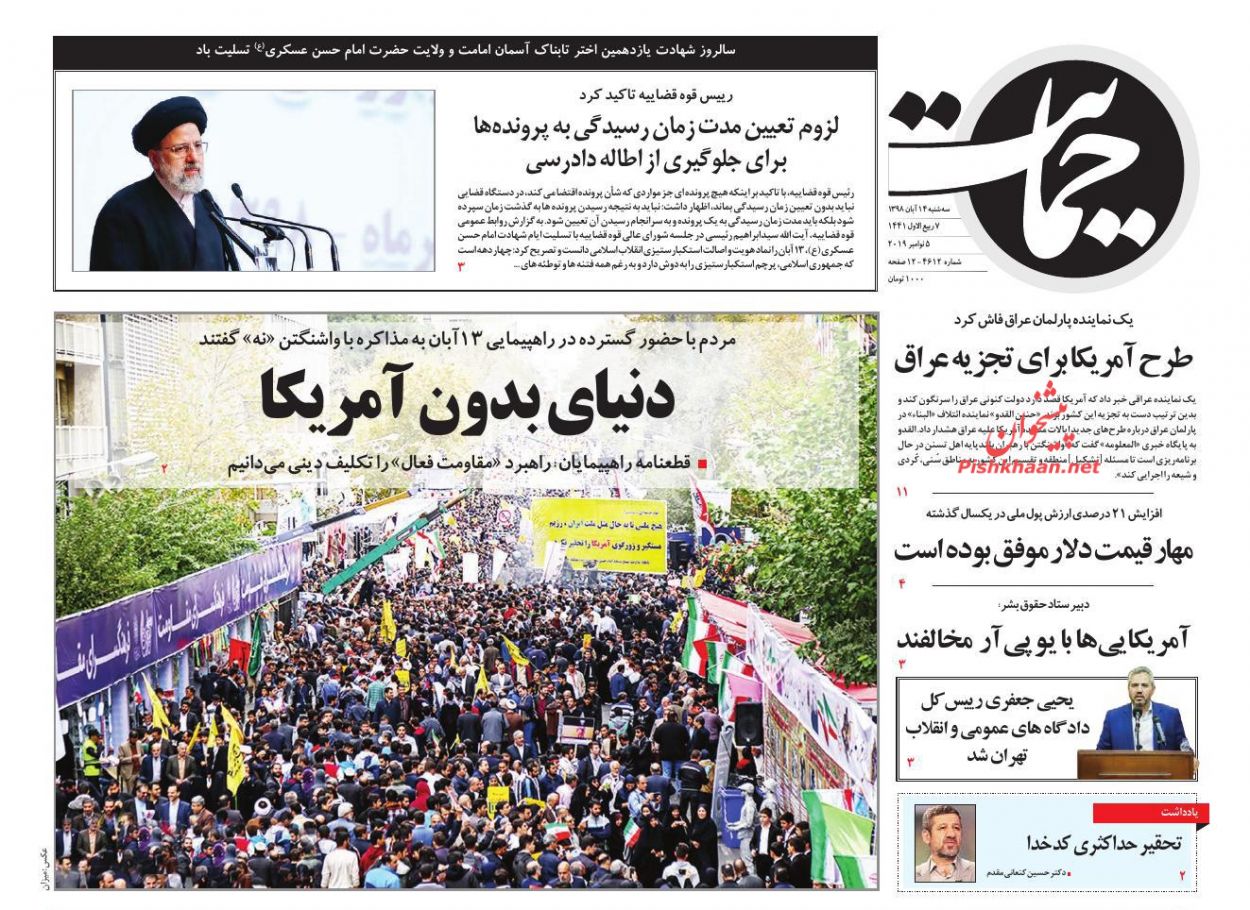 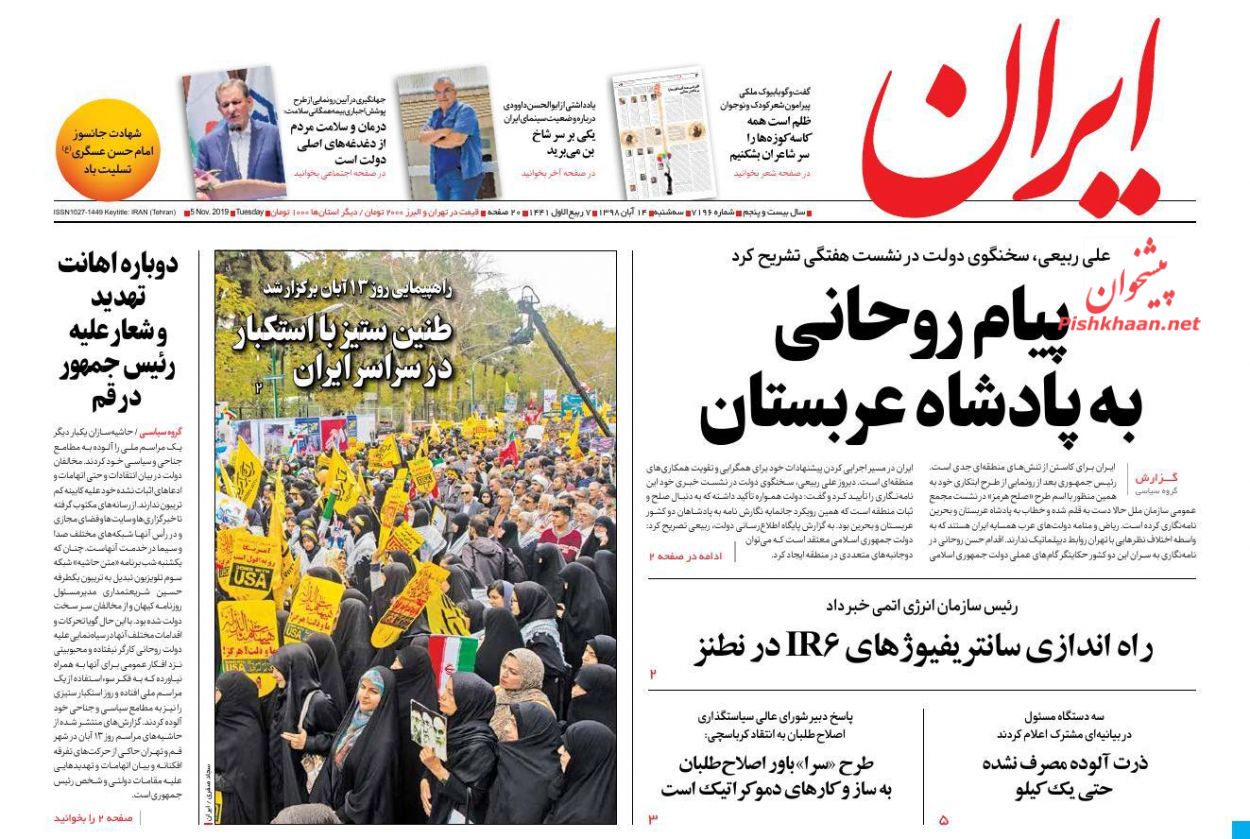 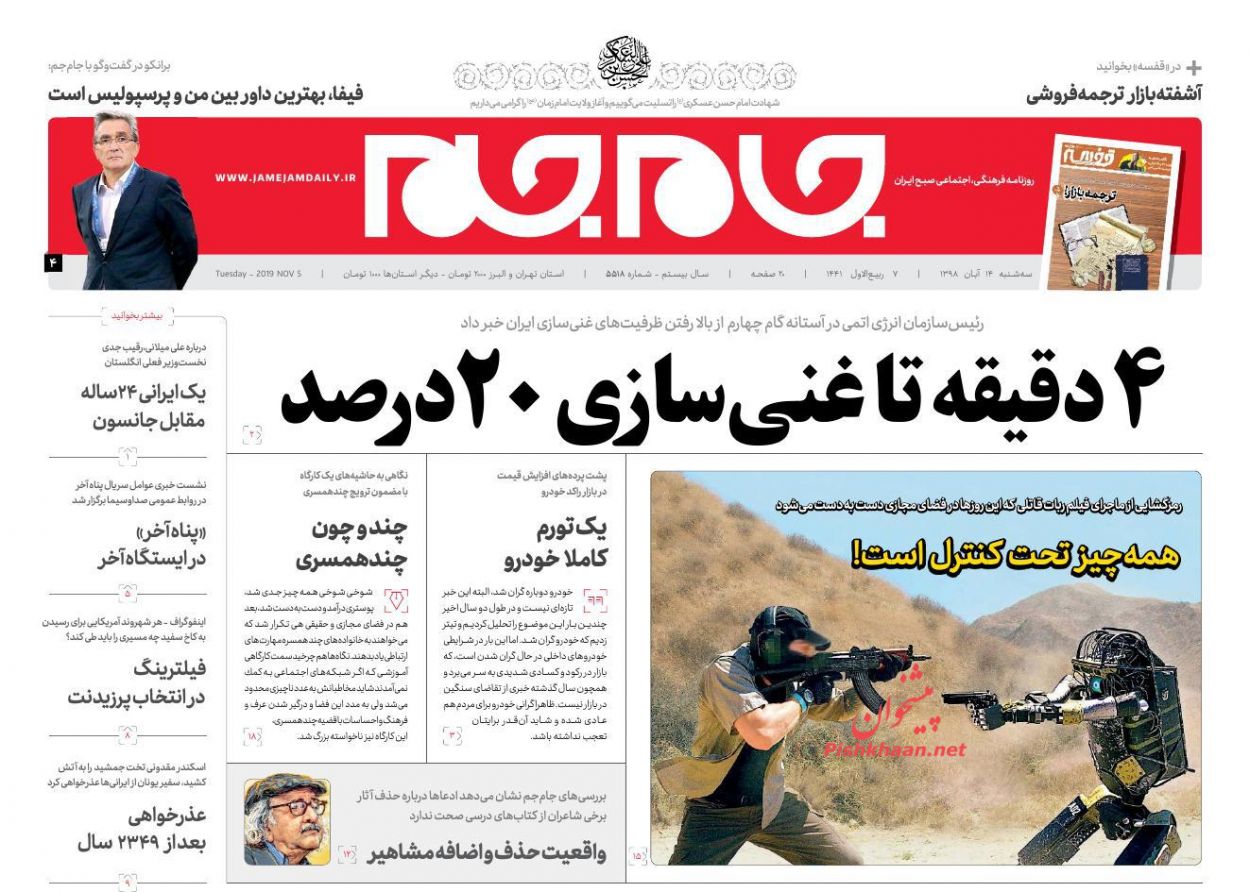 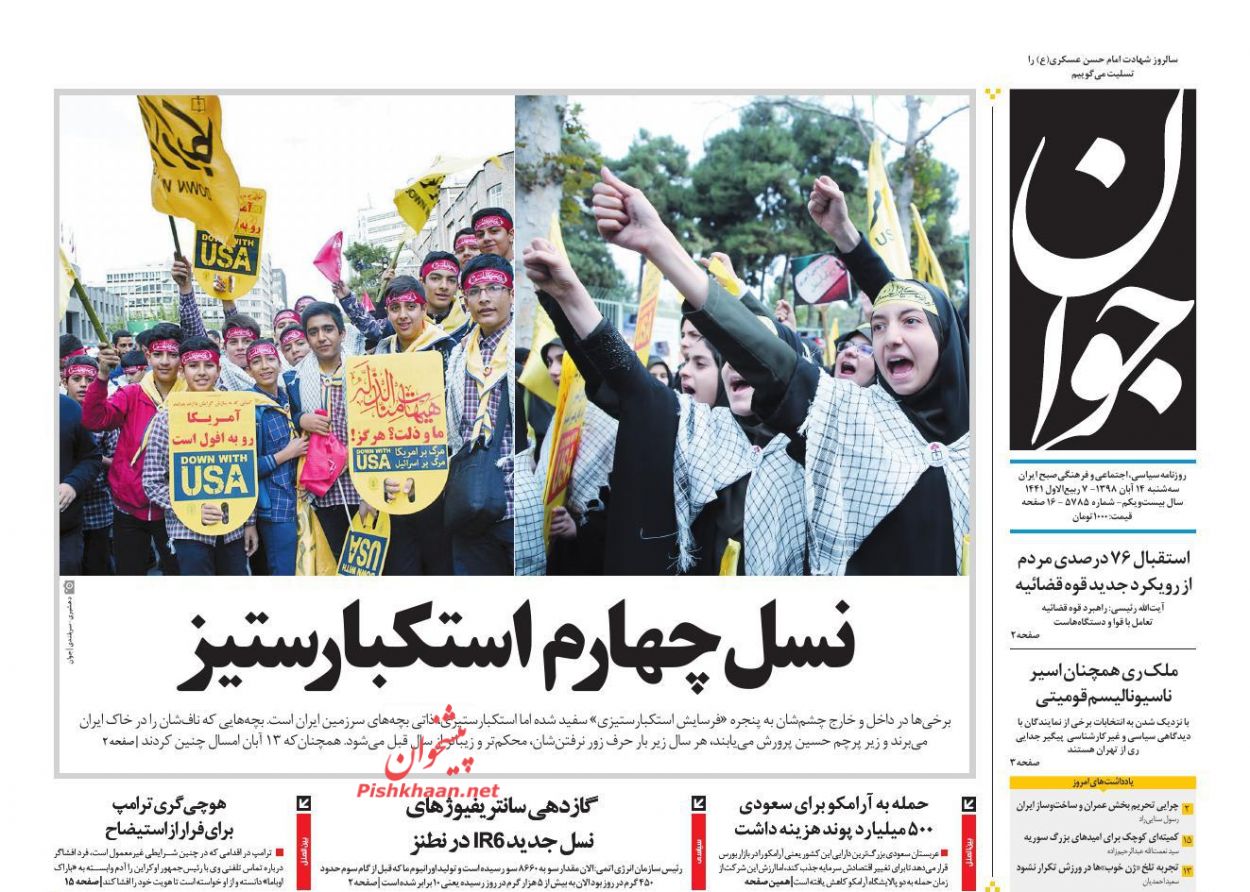 Jomhouri Eslami:
1- Government Spokesman: Details of Reducing JCPOA Commitments to Be Released in Due Time
2- Trump’s Rival in US Elections: He’s Oil Thief 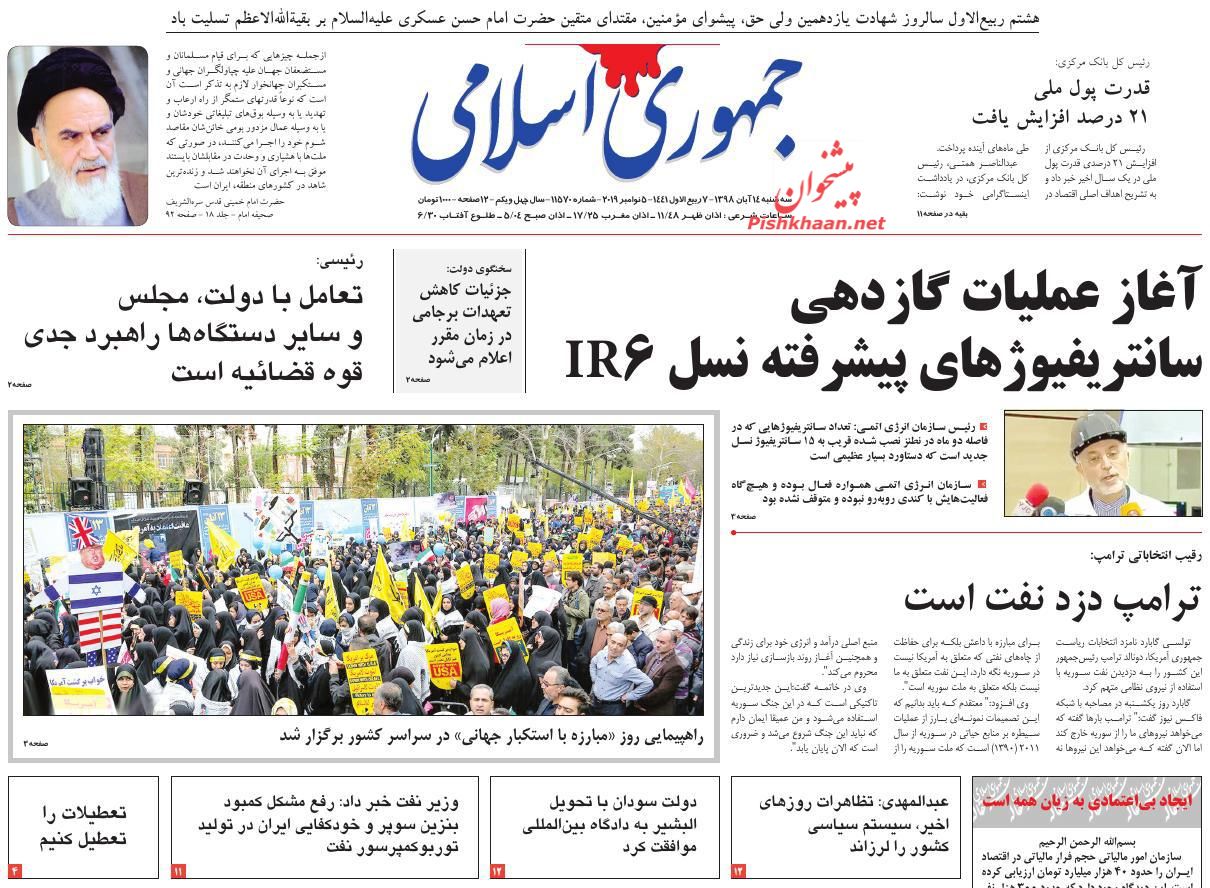 Kayhan:
1- Nov. 4 Epic More Glorious than Ever Across Iran
2- Fourth Phase of Reducing JCPOA Commitments: Will It Be Trivial or Deterrent? 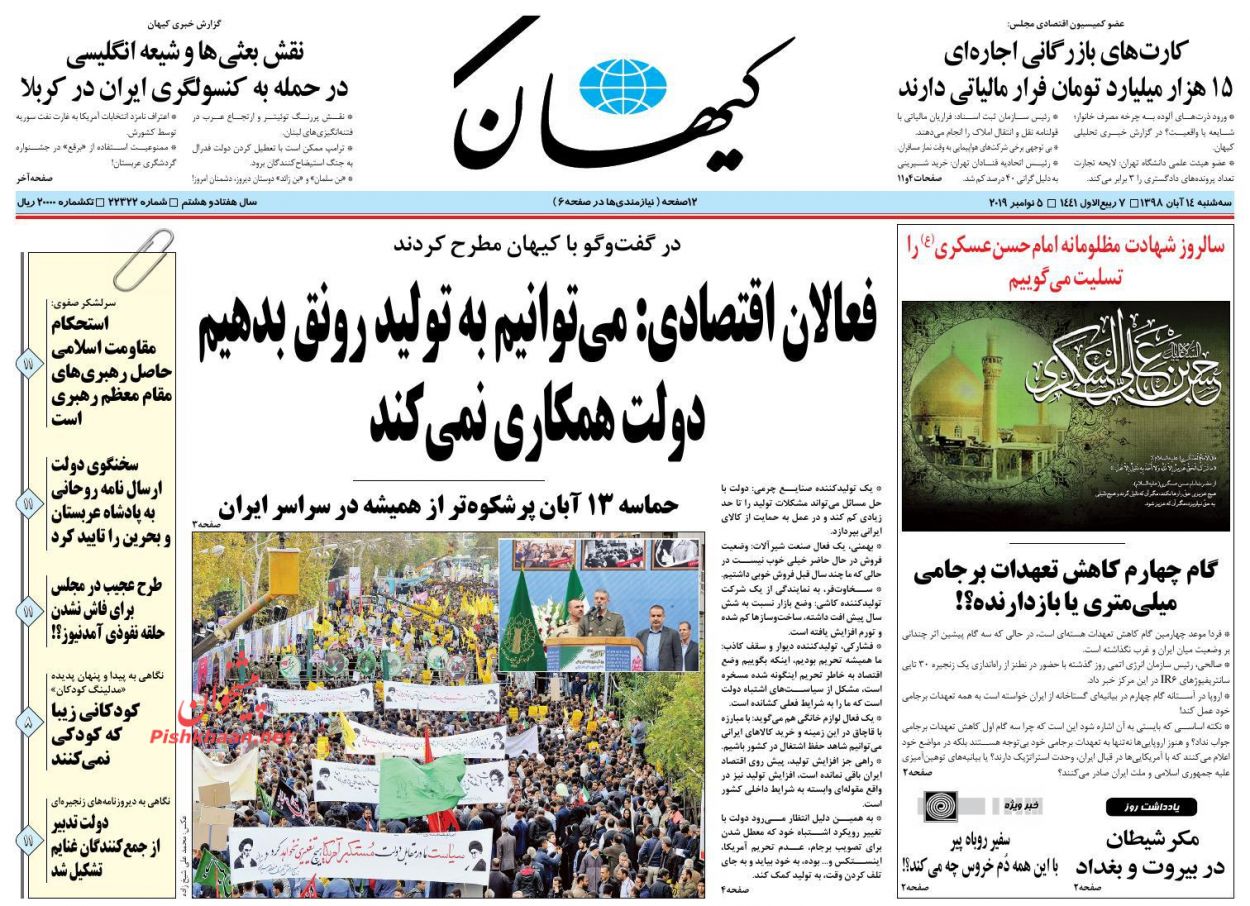 Rooyesh-e Mellat:
1- Army Chief: Kneeling Down Before Enemies Has Had No Achievement for People
2- Iran’s Military Advice Resulted in US Defeat in Syria: Top Aide to Leader 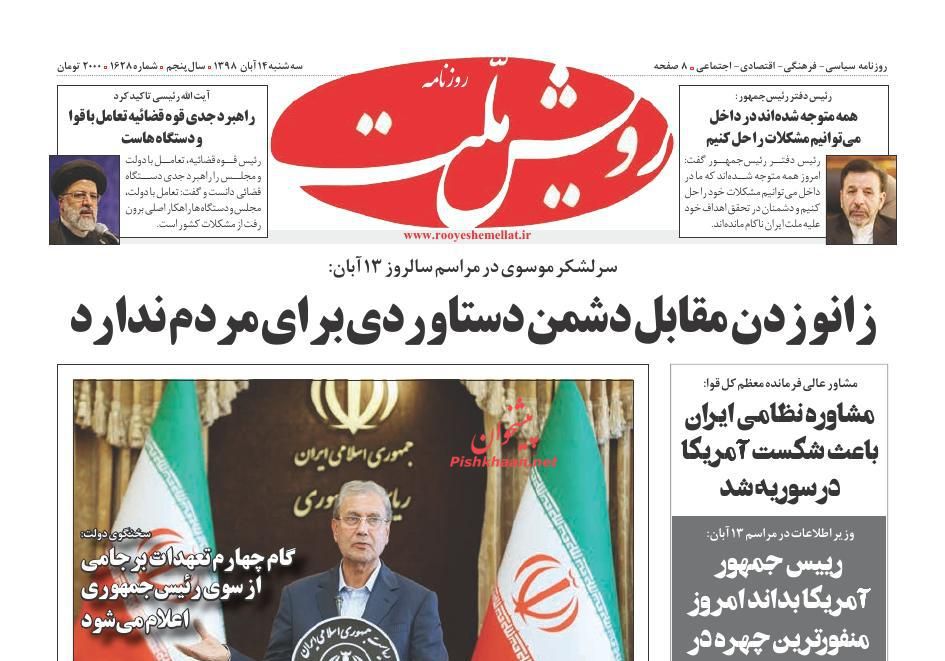 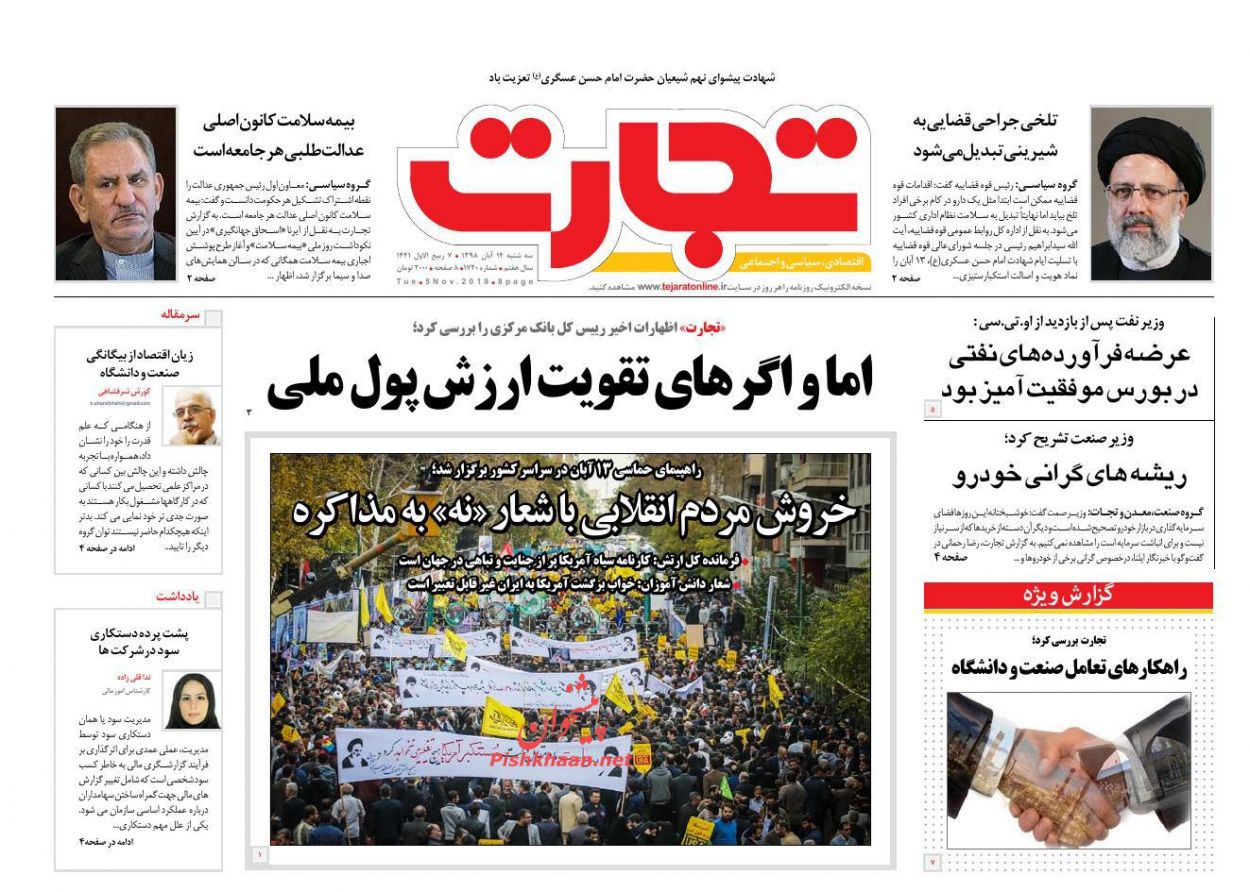