By Seyedeh Maryam Hosseini Lahijani
May 8, 2019

Iran’s Wednesday announcement of its reciprocal measures against the US’ withdrawal from the 2015 nuclear deal was the top story in all papers today. The decision was declared later in the day in a statement by the Supreme National Security Council and a speech by President Hassan Rouhani.

Also a top story today was the Iranian foreign minister’s visit to the Russian capital and his Wednesday talks with Sergei Lavrov, the Russian top diplomat.

1- Pompeo May Meet Putin Next Tuesday in Moscow 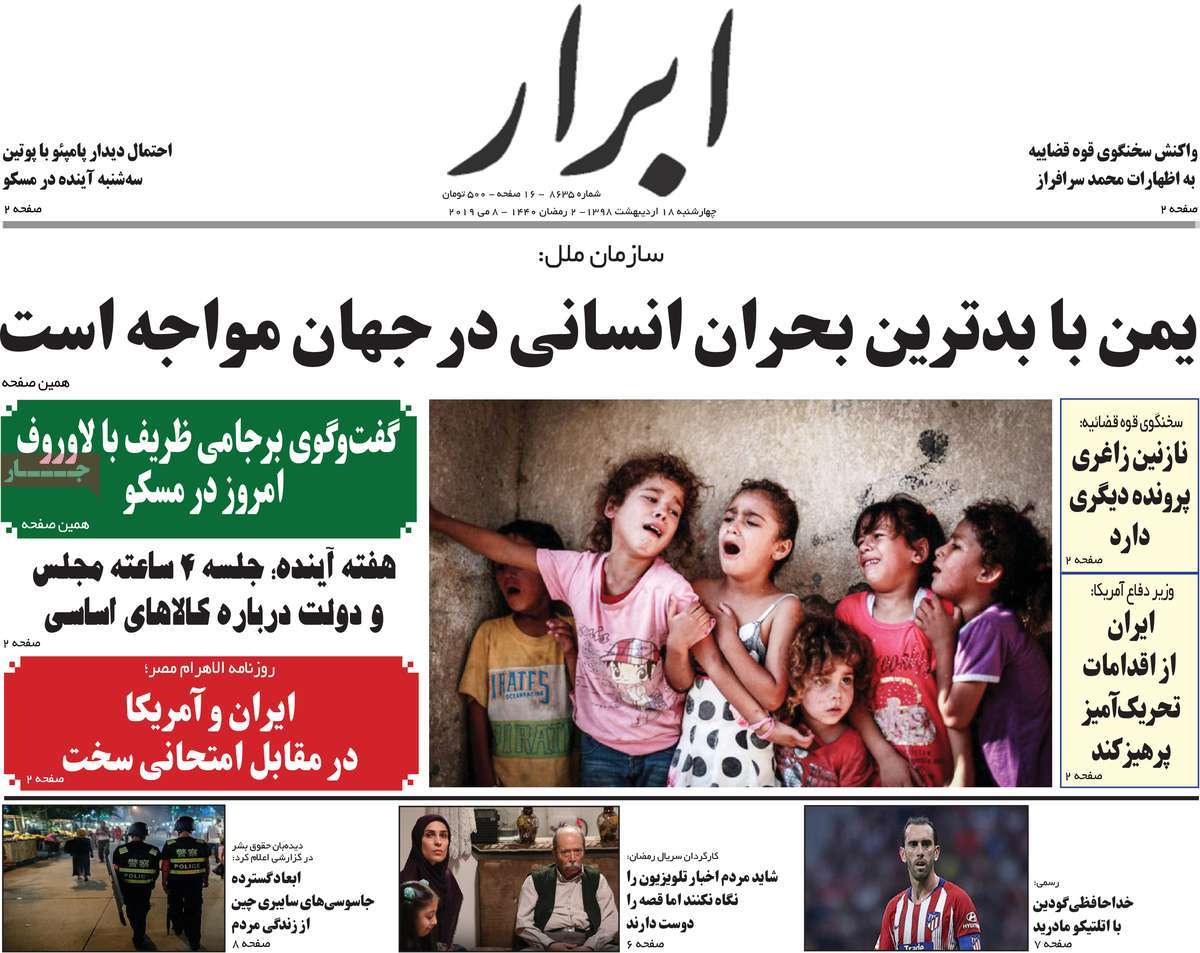 1- Rouhani’s Letter to Leaders of Europe, China, Russia on Reduction of Iran’s Commitments 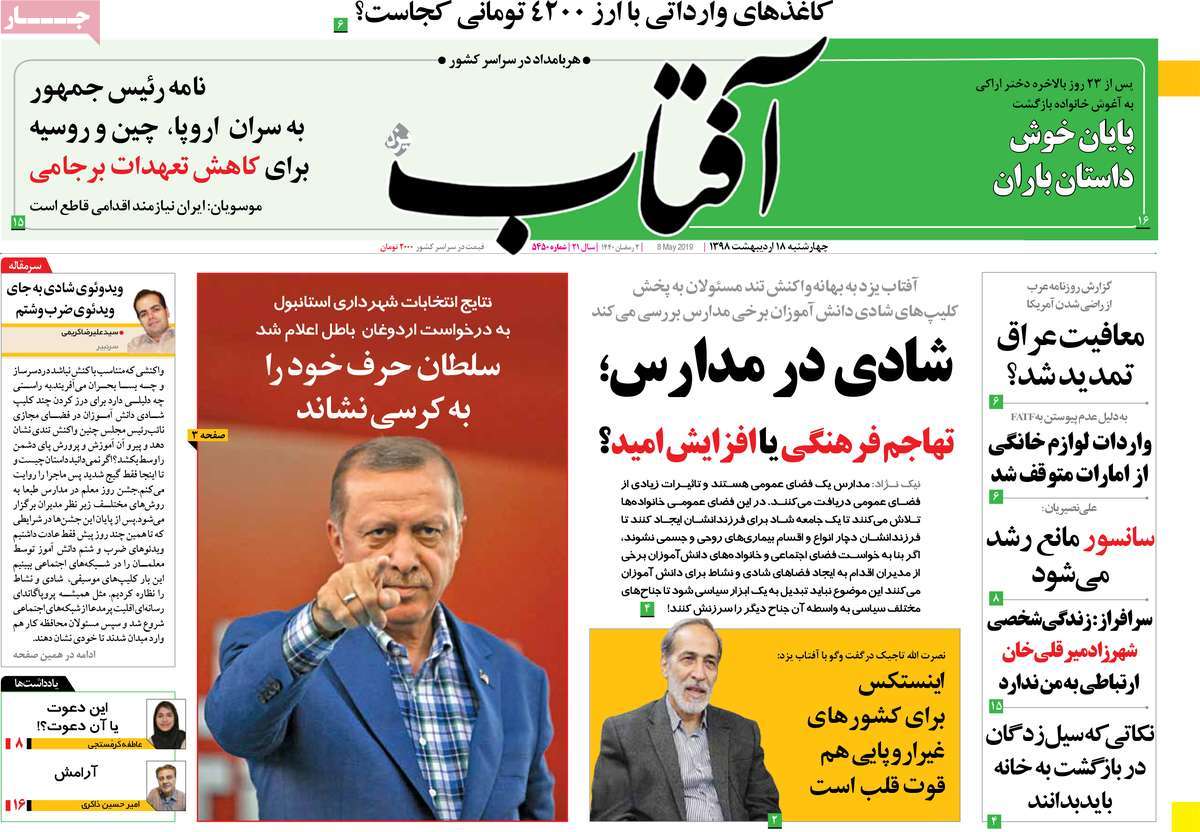 1- US Statesmen, Not Generals Seeking War with Iran

2- Iran to Break Its Silence on JCPOA: Iran’s First Reaction to US Withdrawal, EU’s Failure to Do Enough 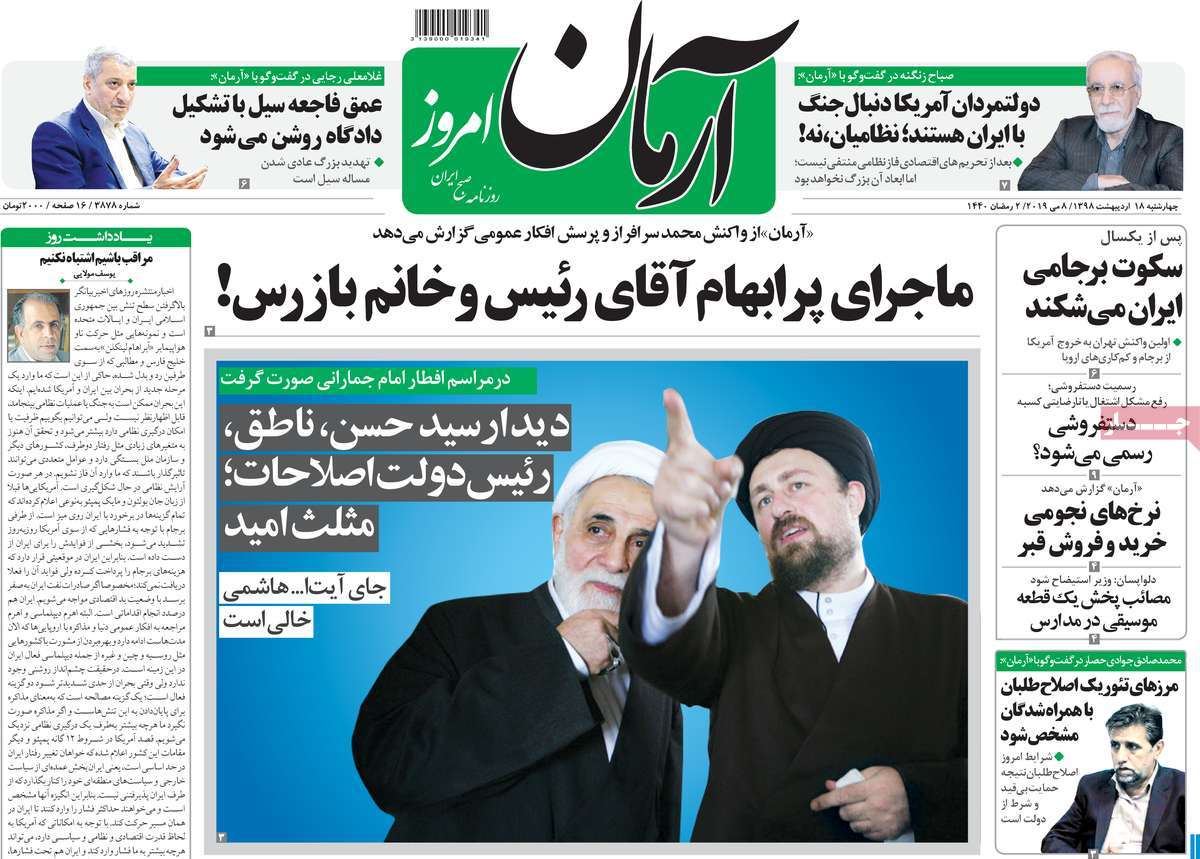 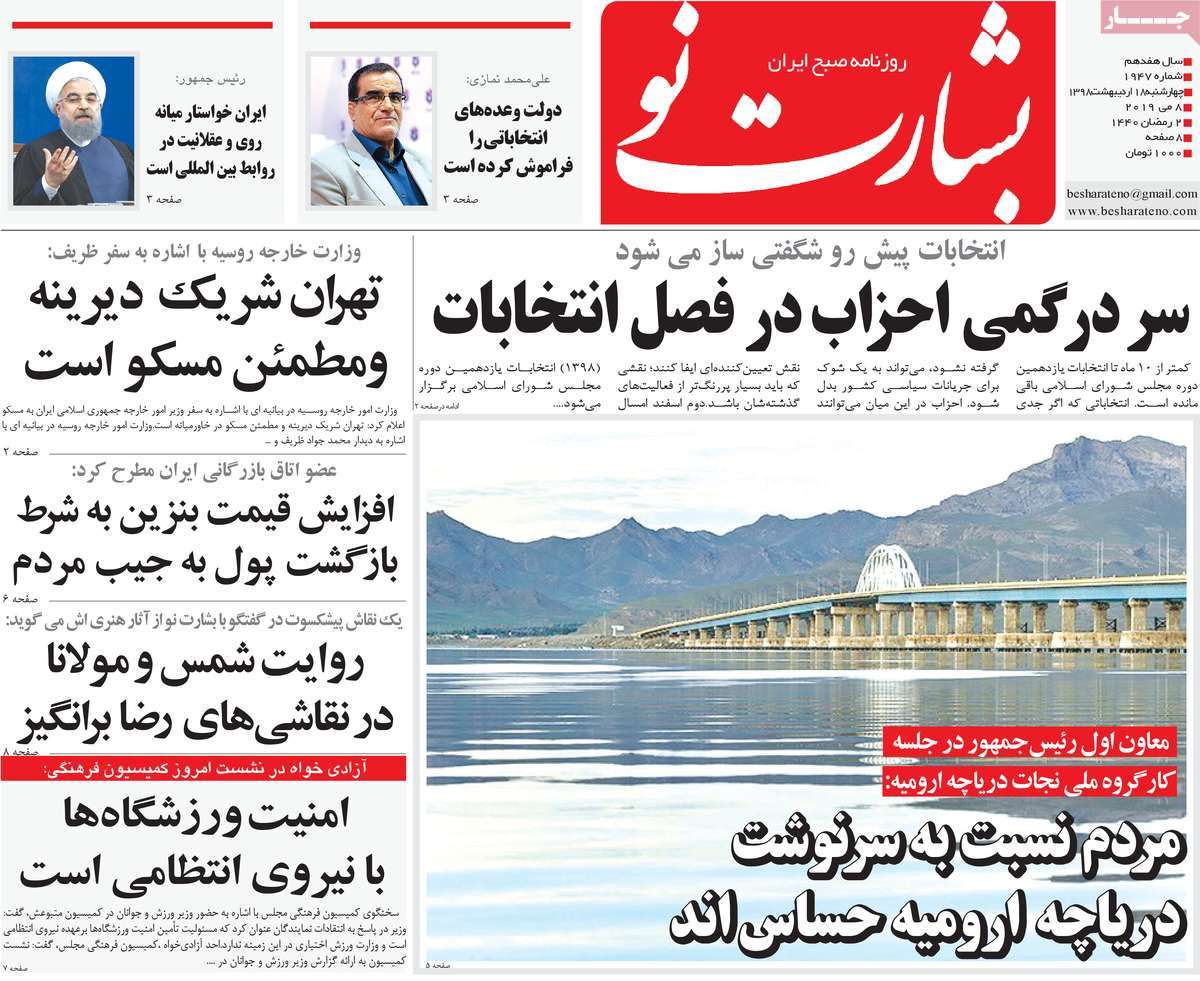 * Iran Not to Withdraw from JCPOA for Now 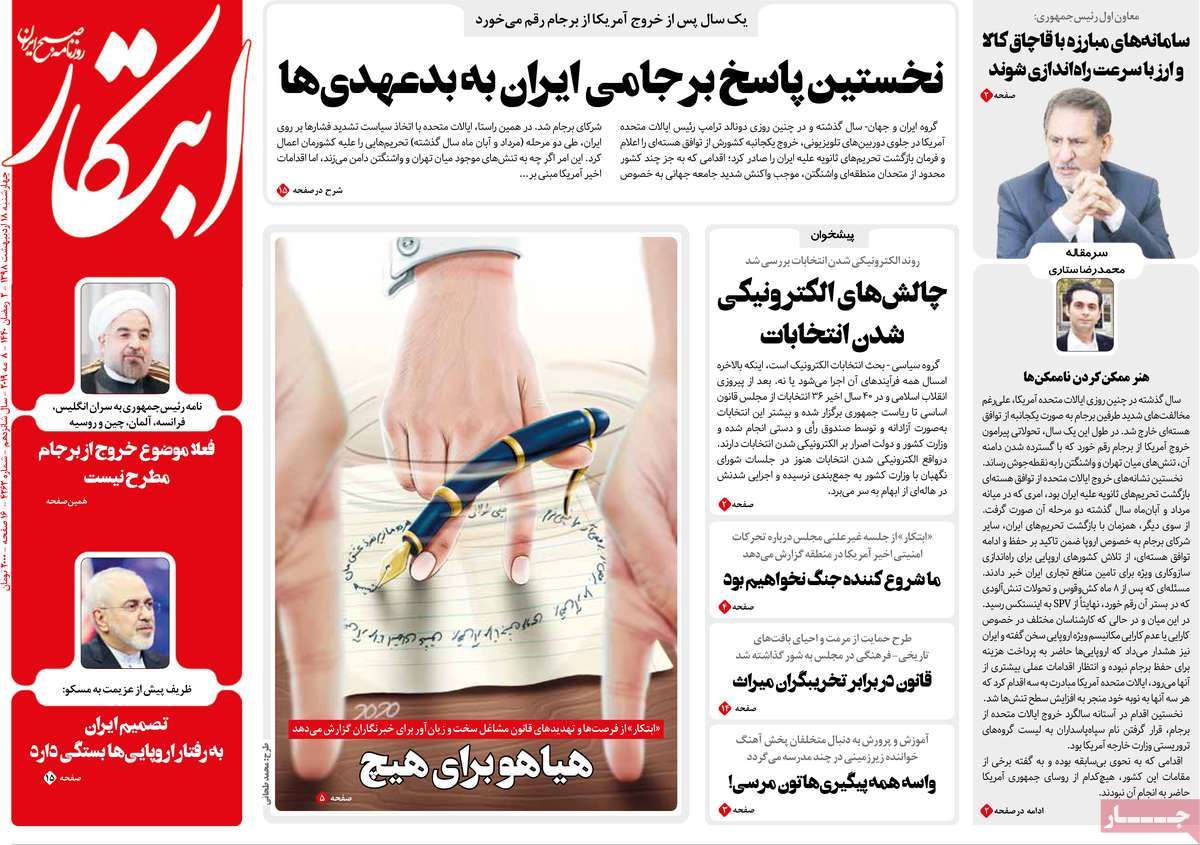 1- What’d Beijing Do in Reaction to Trump’s Threats? 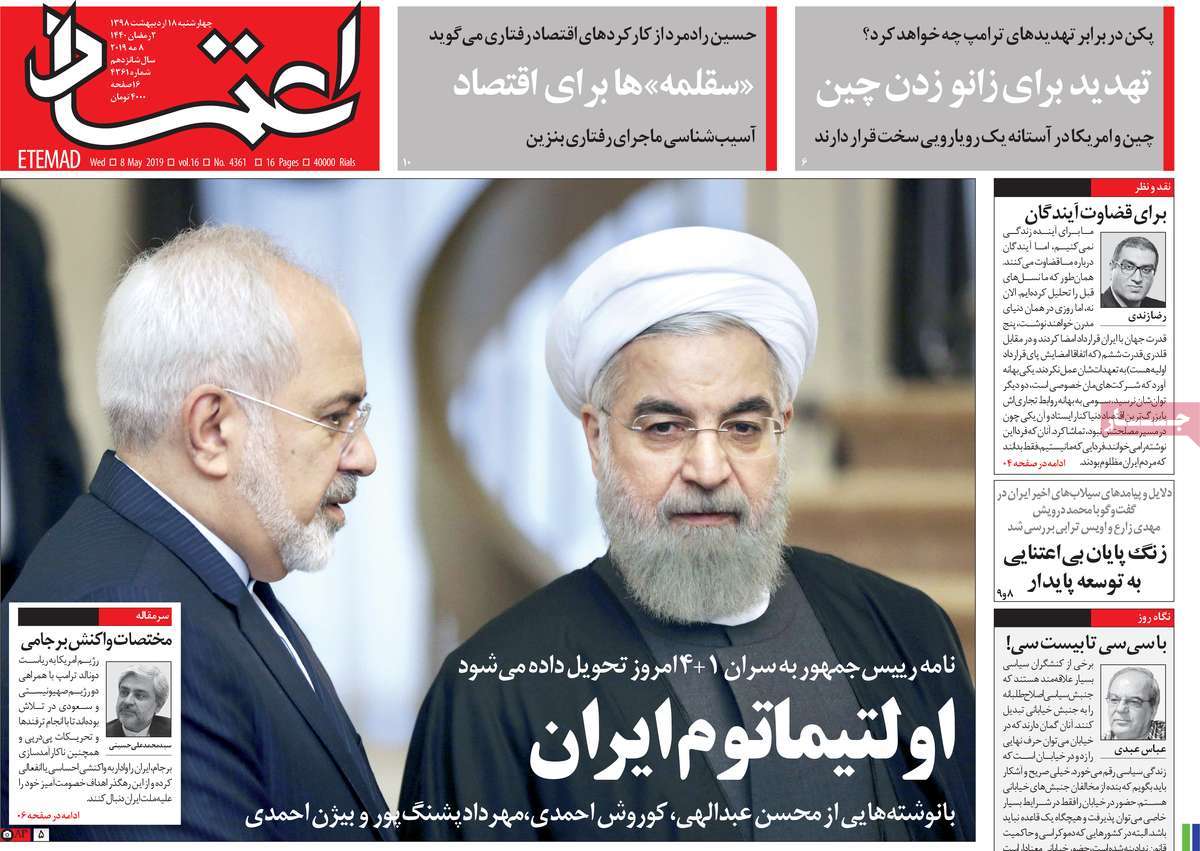 1- Iraq’s Nujaba Movement: We Follows Ayatollah Khamenei, Will Fight Until Victory of the Oppressed

4- 53 Political, Military Officials in US Call for Return to JCPOA 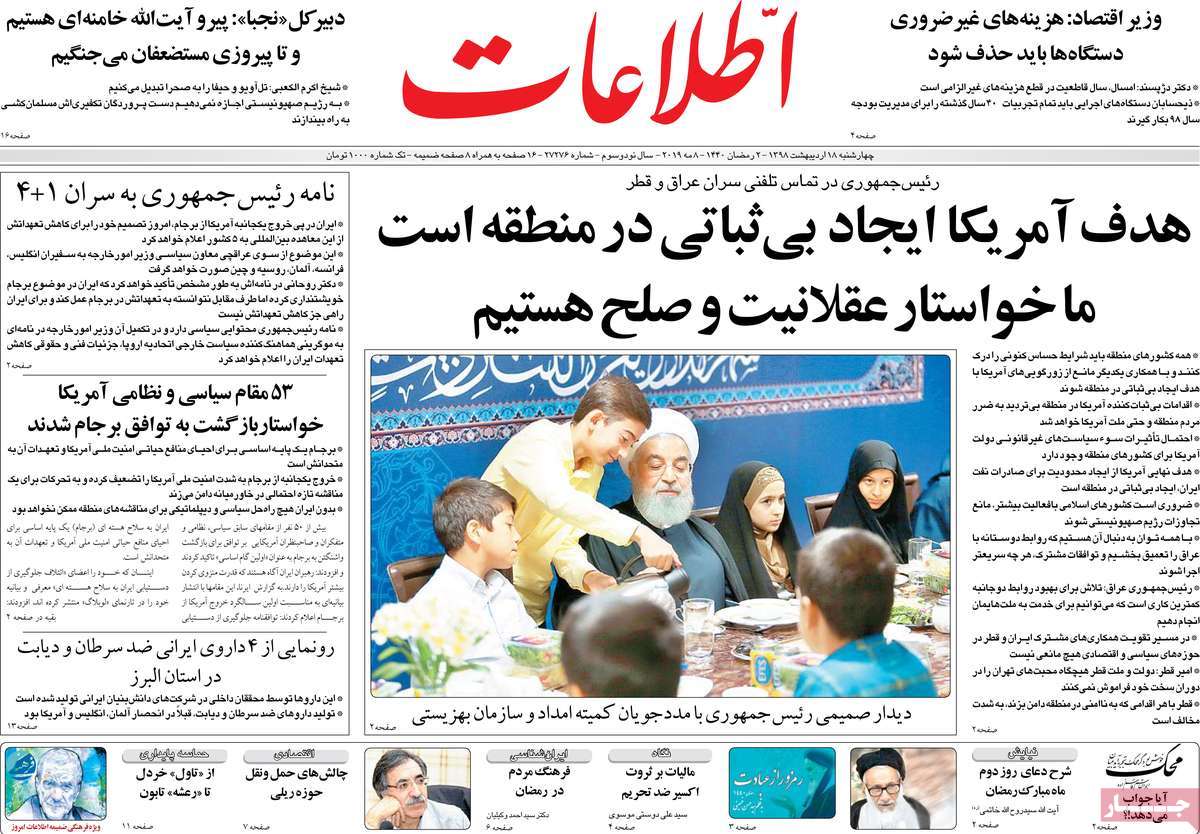 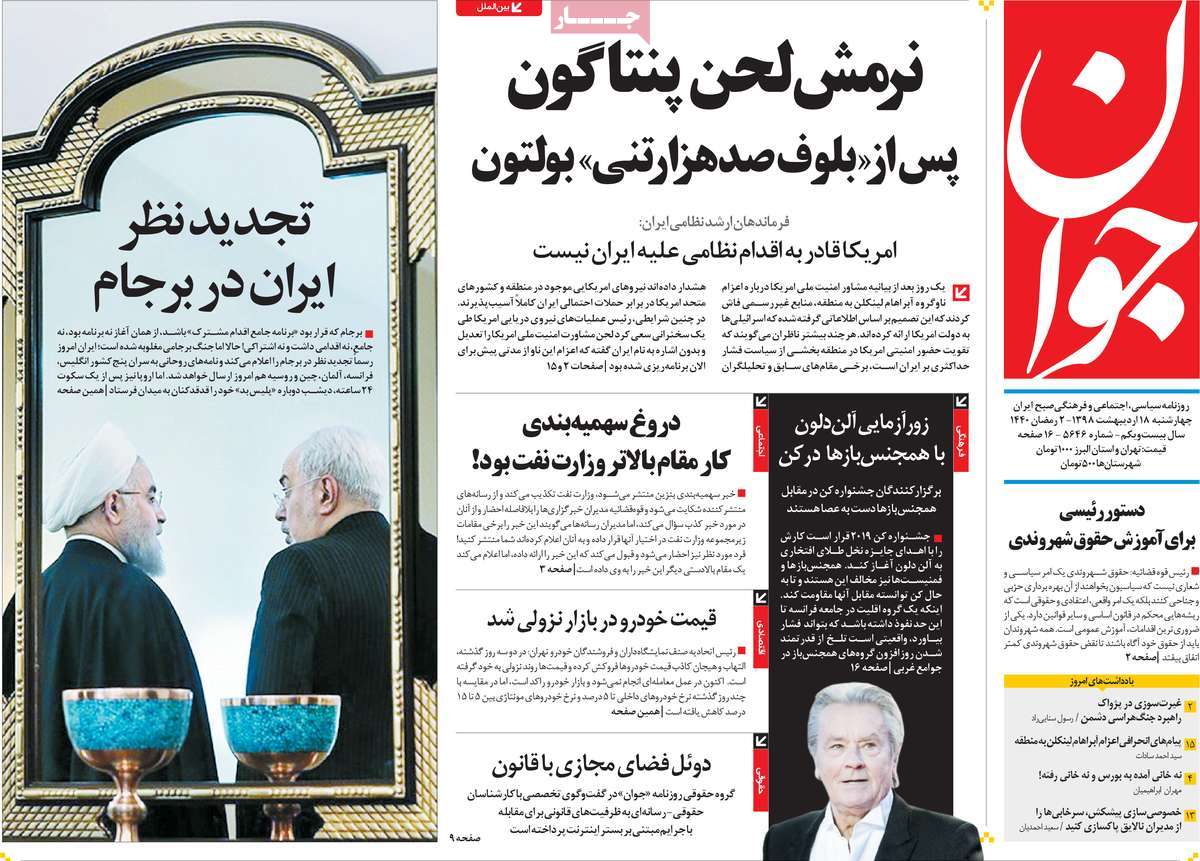 1- 500 Former Prosecutors of US Call for Prosecution of Trump

2- US Sanctions against Iran Violation of Human Rights: UN Expert

3- Iran Totally Committed to JCPOA, Has Right to Reciprocate Violations 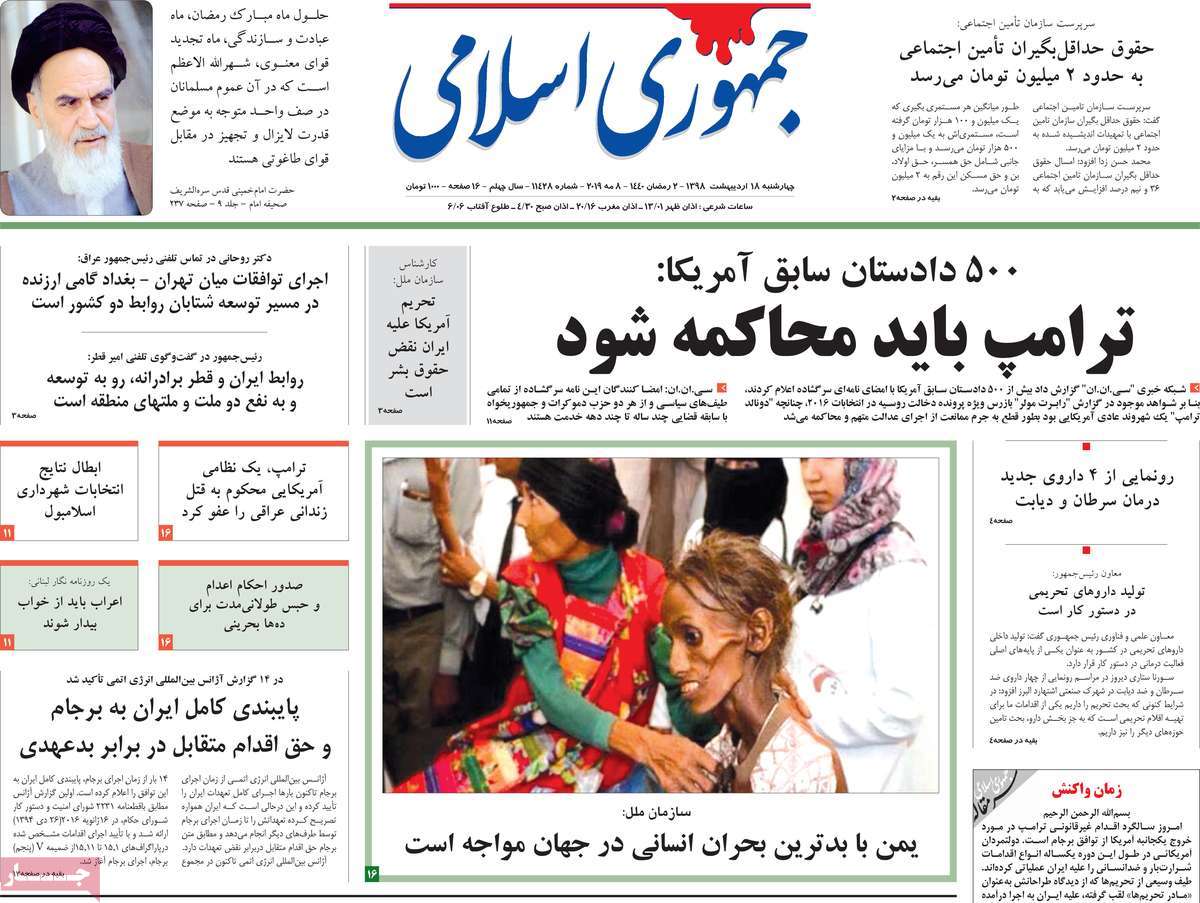 1- CIA’s Scenario for Venezuela: Guaido Must Be Killed

2- One Year after Death of JCPOA: US Left, We Remained with Absolute Damage

3- Former Pentagon Official: Iran Can Cause Bad Damages to US, Allies 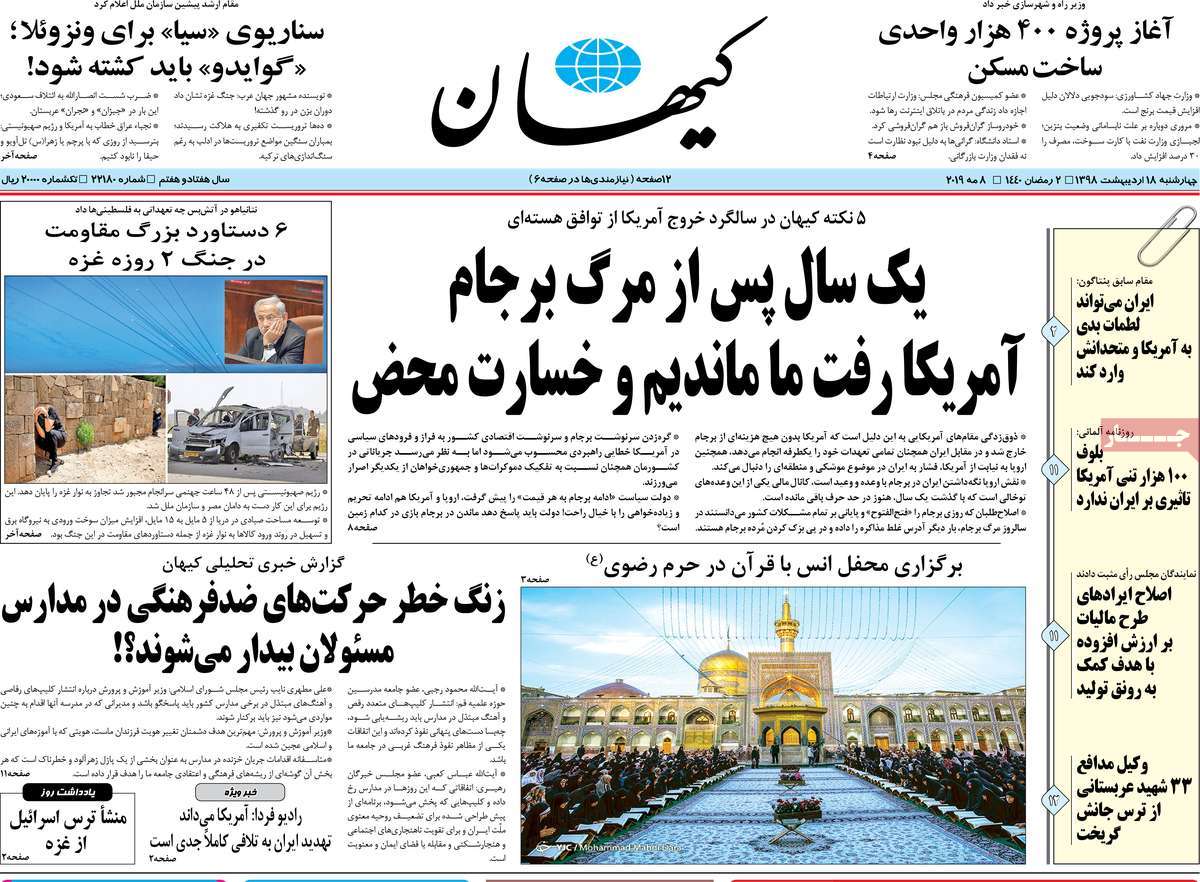 1- Ultimatum: A Report on Details of Iran’s Action against US

2- Rouhani to Talk to People Today

* Zarif to Brief Mogherini on Details of Iran’s Measures

* Next 60 Days a Chance for Europe 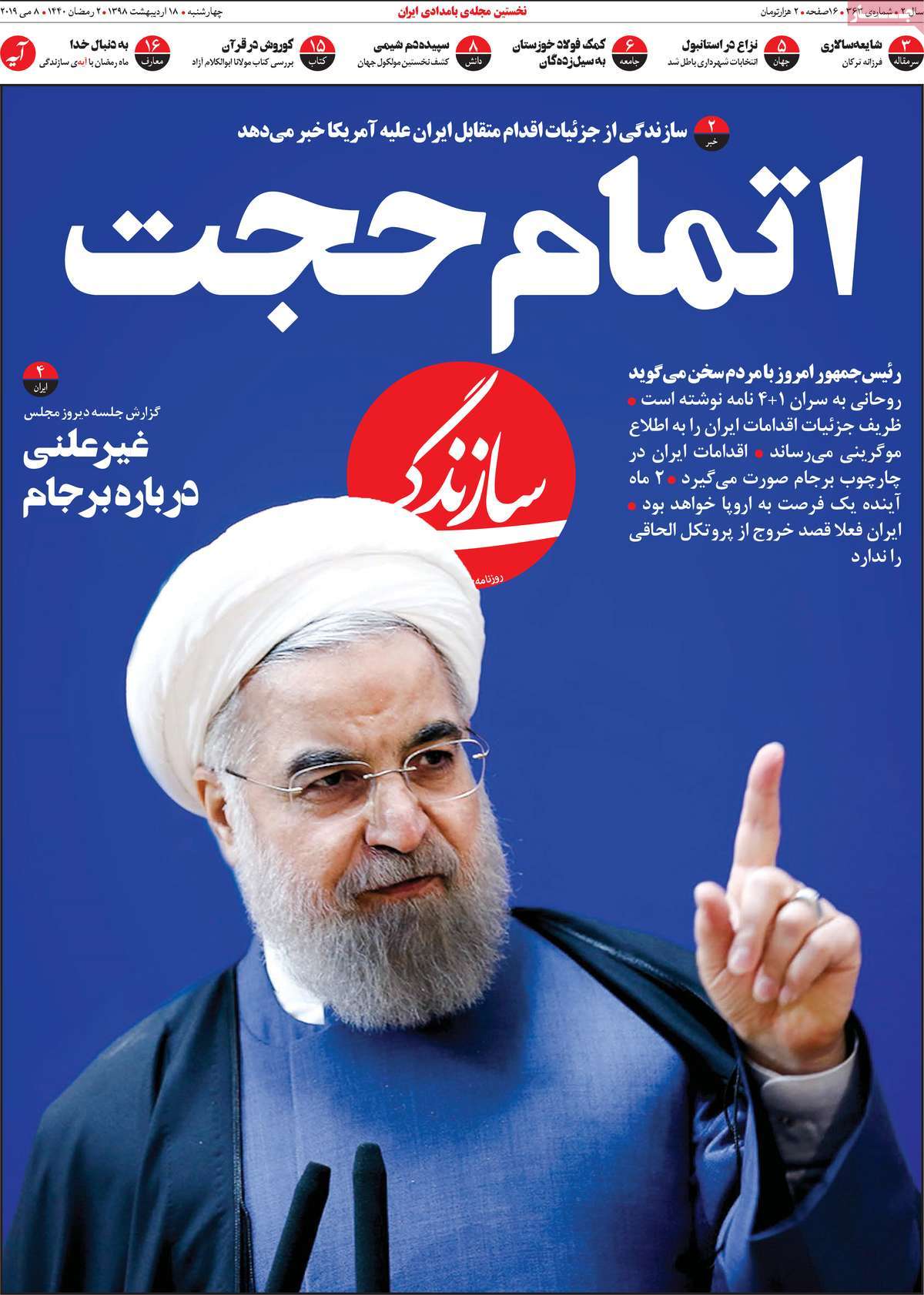 2- Historical Surgery of JCPOA: Iran to Unveils Reciprocal Diplomacy on Anniv. of US Pullout 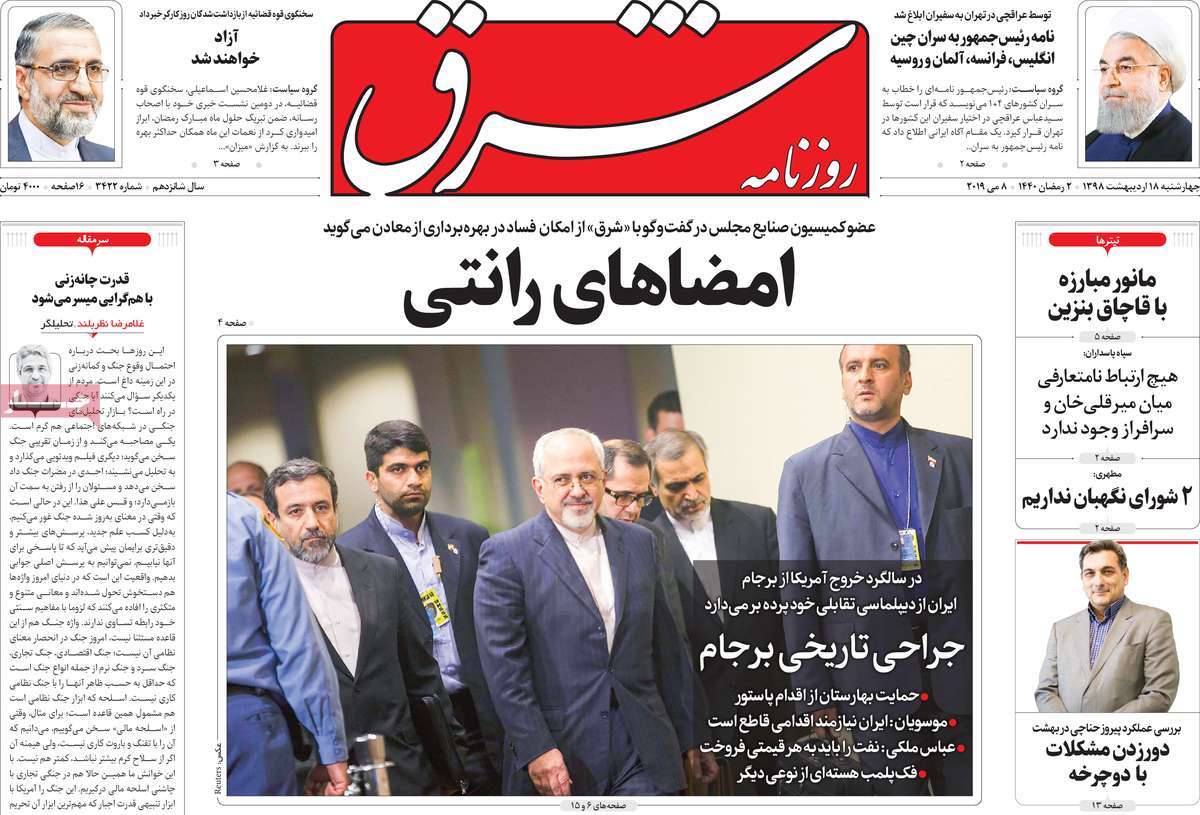