IFP has taken a look at the front pages of Iranian newspapers on Thursday, April 18, 2019, and picked headlines from 14 of them. IFP has simply translated the headlines and does not vouch for their accuracy.

The top story in today’s newspapers was the meeting of Ayatollah Seyyed Ali Khamenei, the Leader of the Islamic Revolution, with commanders and personnel of the Iranian Army on the occasion of National Army Day. During the meeting, the Leader praised the Army’s efforts and services, particularly during the recent floods.

A letter by Zarif to his world counterparts on the dangerous consequences of the US’ blacklisting of IRGC, and Instagram’s move to block the accounts of IRGC generals over the US ban also received great coverage. 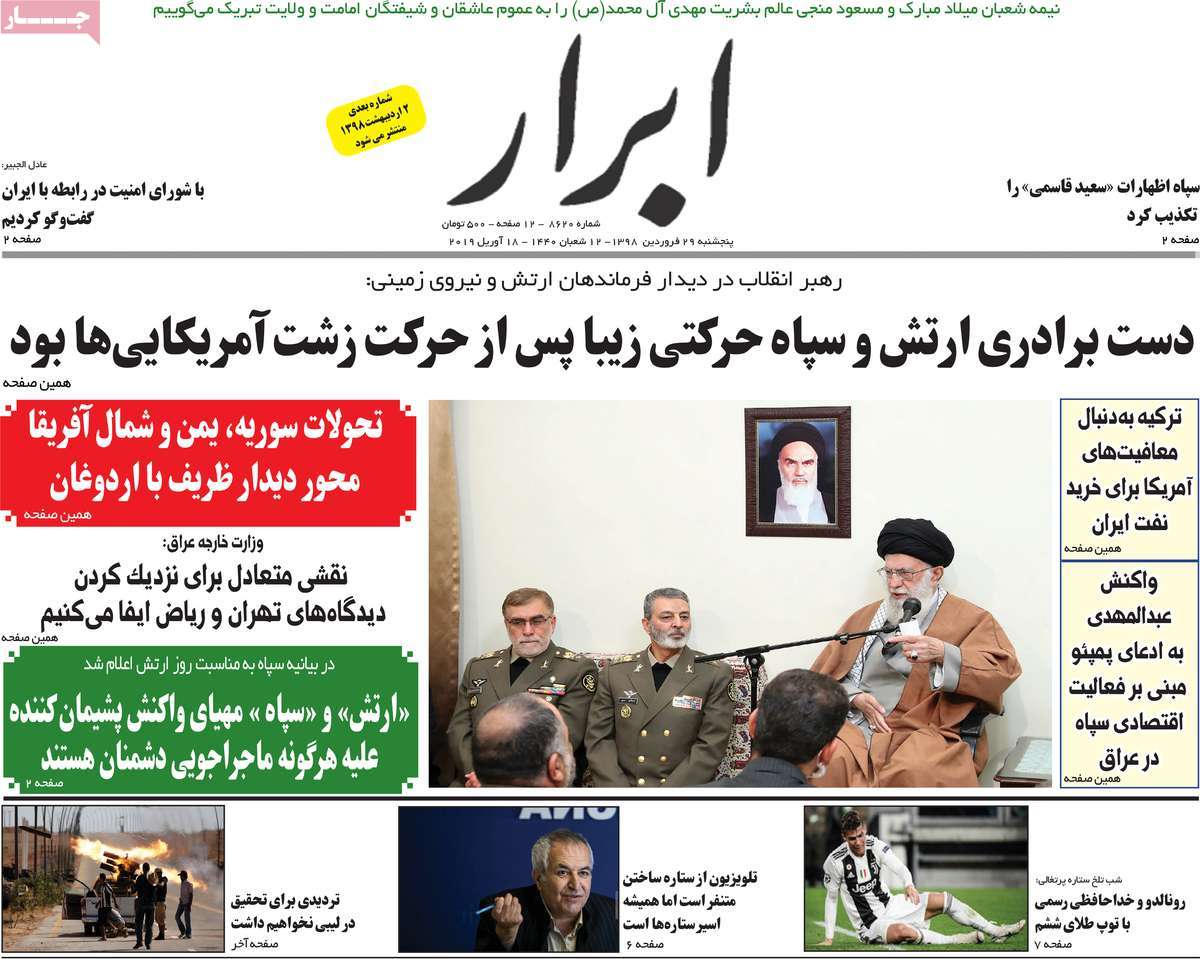 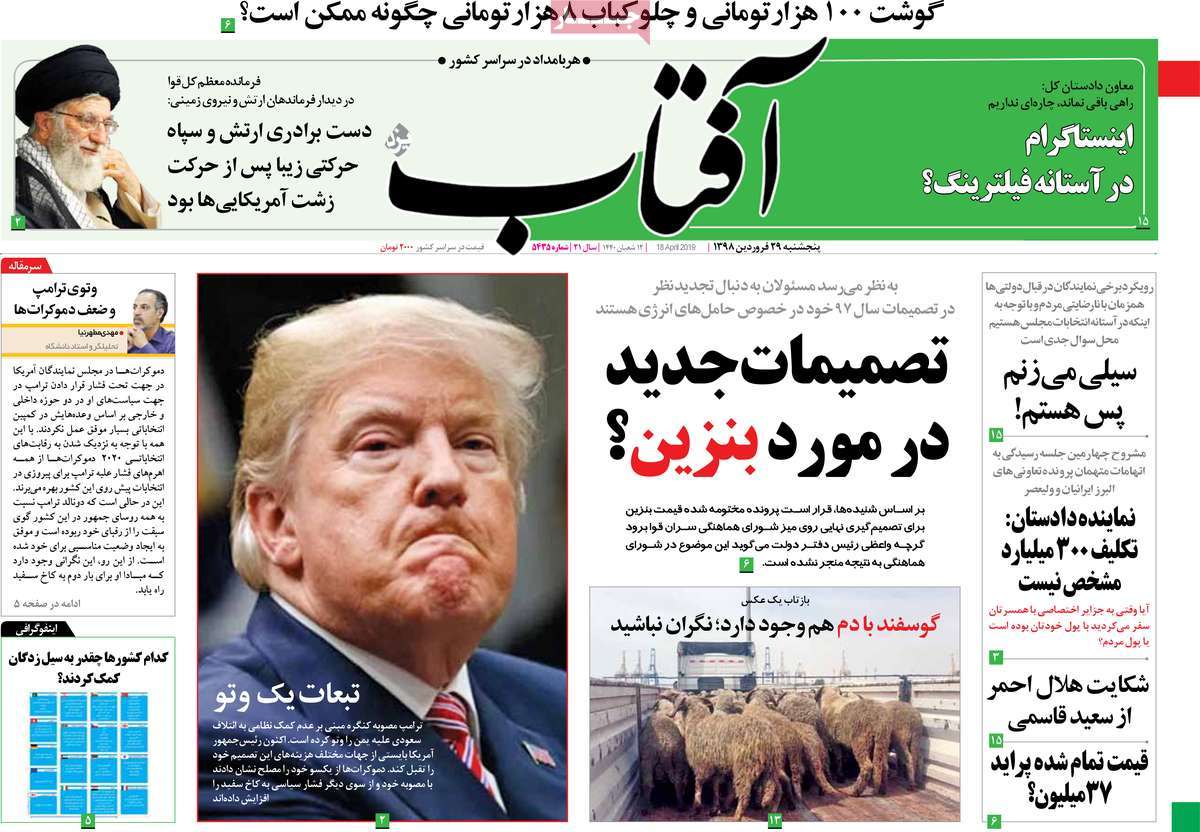 Arman-e Emrooz:
1- No One to Forget Army’s Humble Services during Flood: Leader
2- Triangle of Peace to Get More Active for Syria: Zarif Meets Erdogan 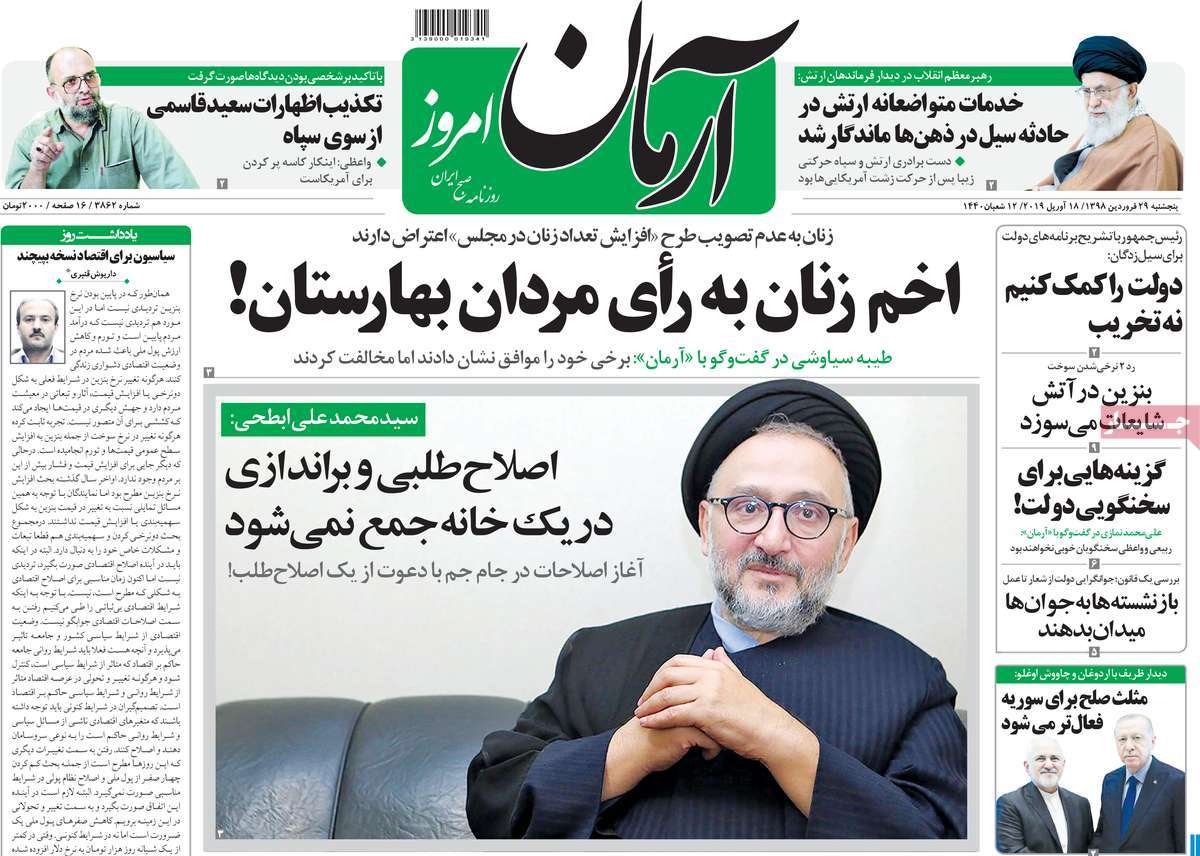 Asrar:
1- Zarif: US Gov’t Ignoring Int’l Rules
2- Iran to Turn from Oil-Oriented Country to Gas-Oriented State in Near Future [Editorial] 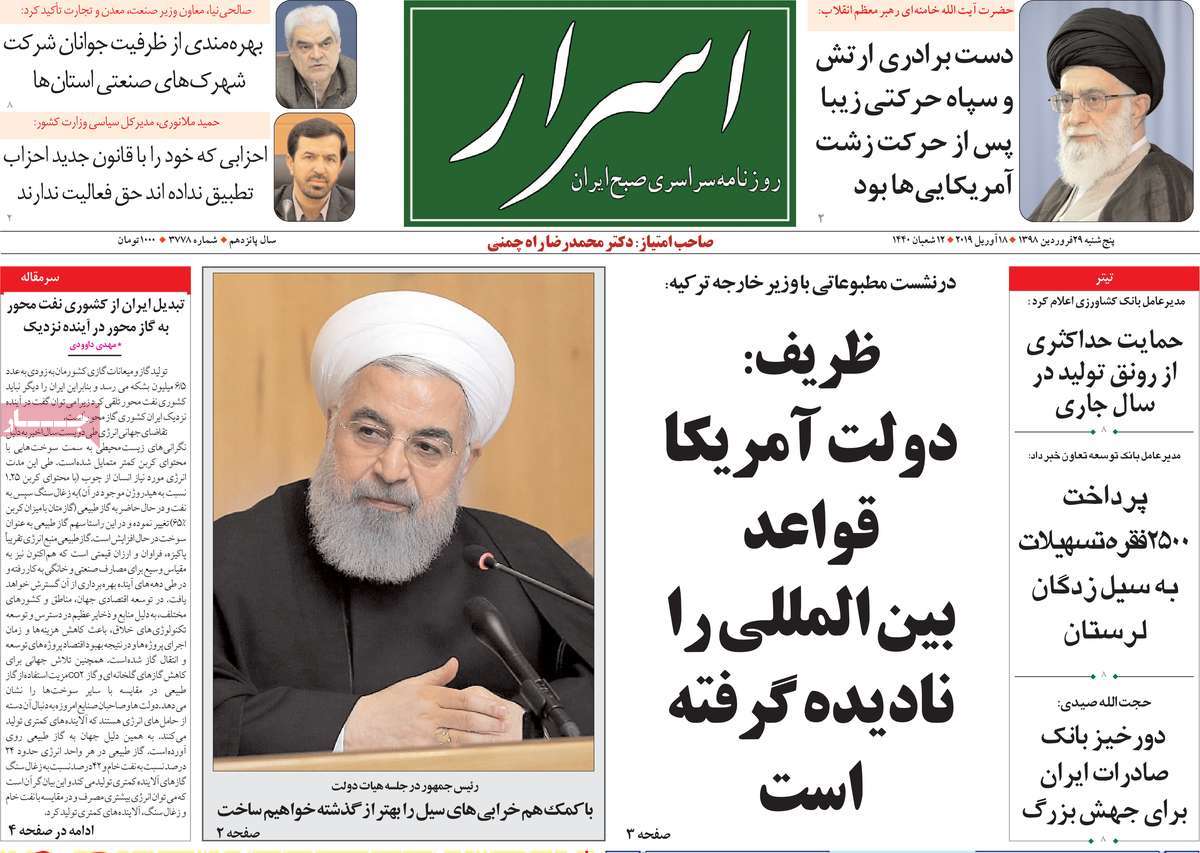 Ebtekar:
1- Iran Leader: Moves that May Embolden Enemies Must Be Avoided
2- Rouhani: We’ll Reconstruct Flood-Hit Areas Better than Before with Each Other’s Help 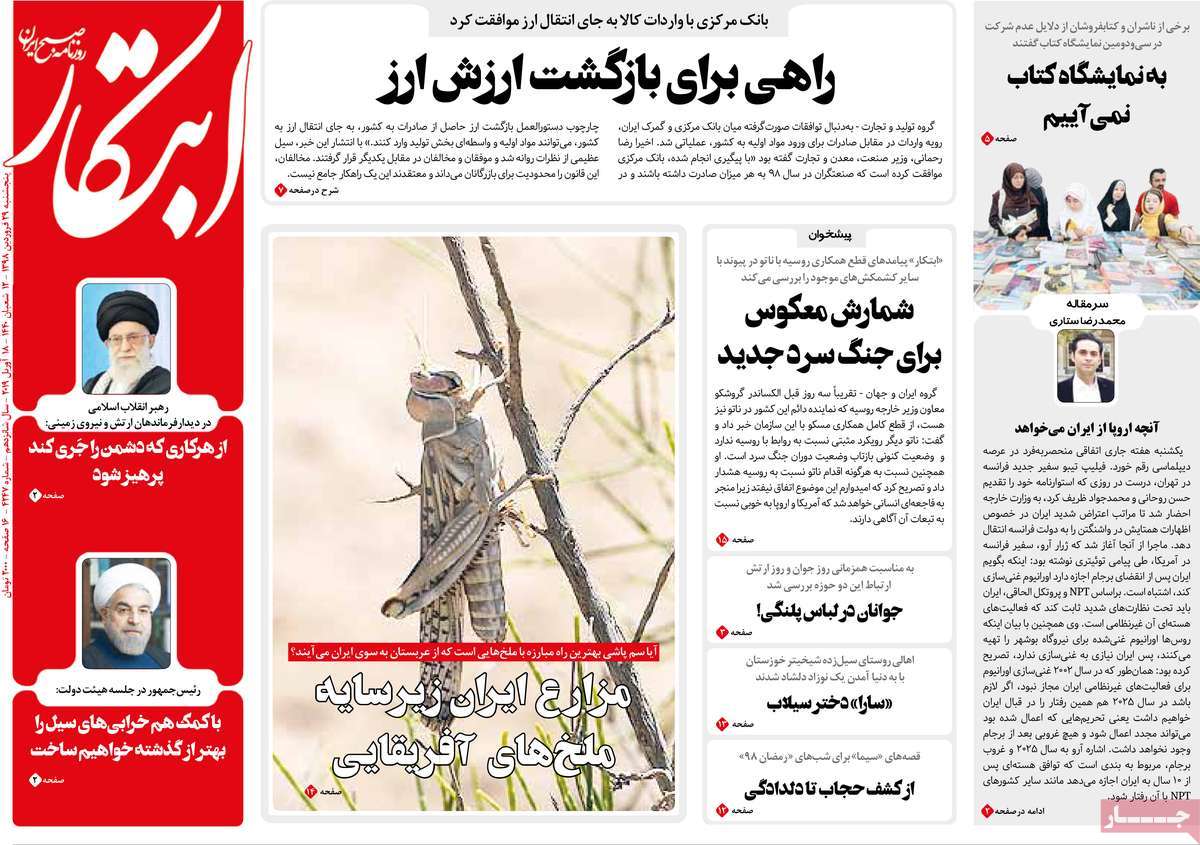 Etemad:
1- Armed Forces among Epitomes, Main Elements of National Might: Leader
2- Unprecedented Harmony of Two Neighbours: A Report from Turkey 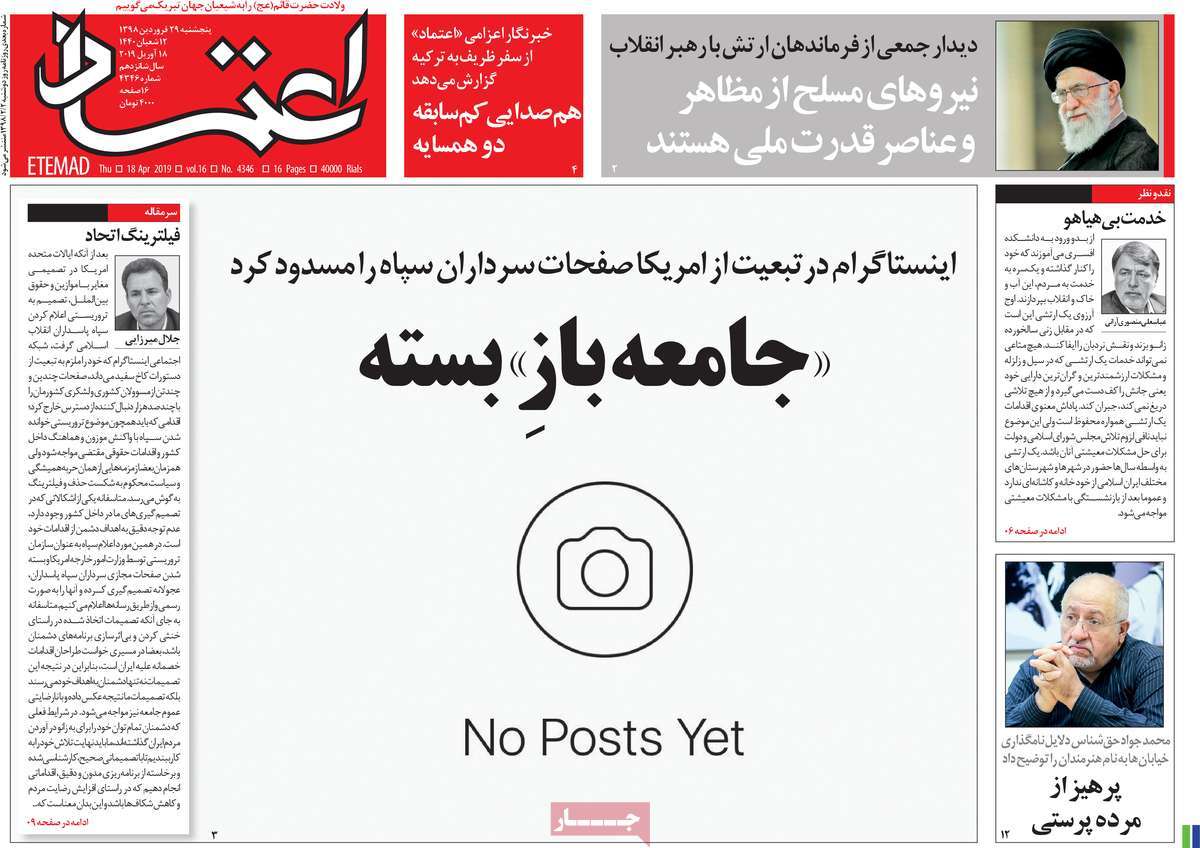 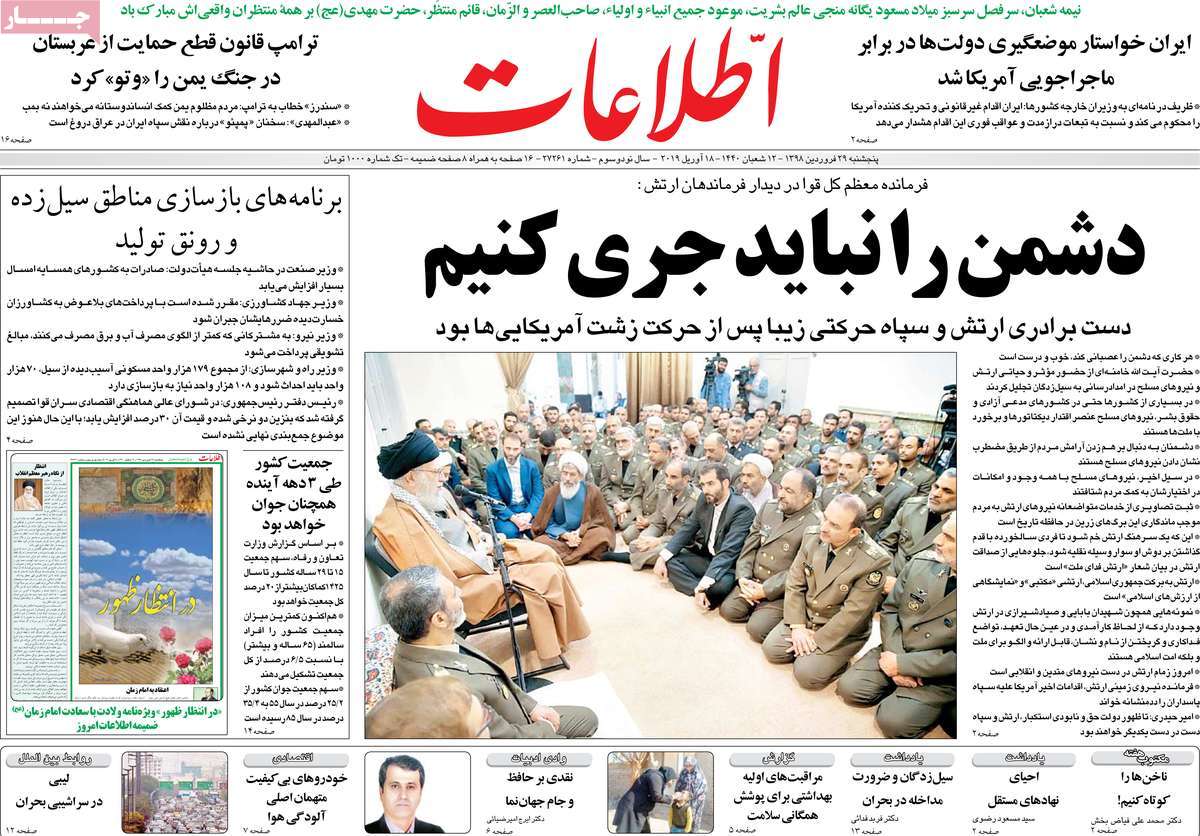 Jame Jam:
1- Army Sincere When It Says It Sacrifices Itself for People: Leader
2- Zarif Warns about US’ Mischief in Letter to World Counterparts
3- Instagram’s Cyber Attack
* Instagram Blocking Accounts on Pretext of Blacklisting of IRGC Which Is Fighting Terror 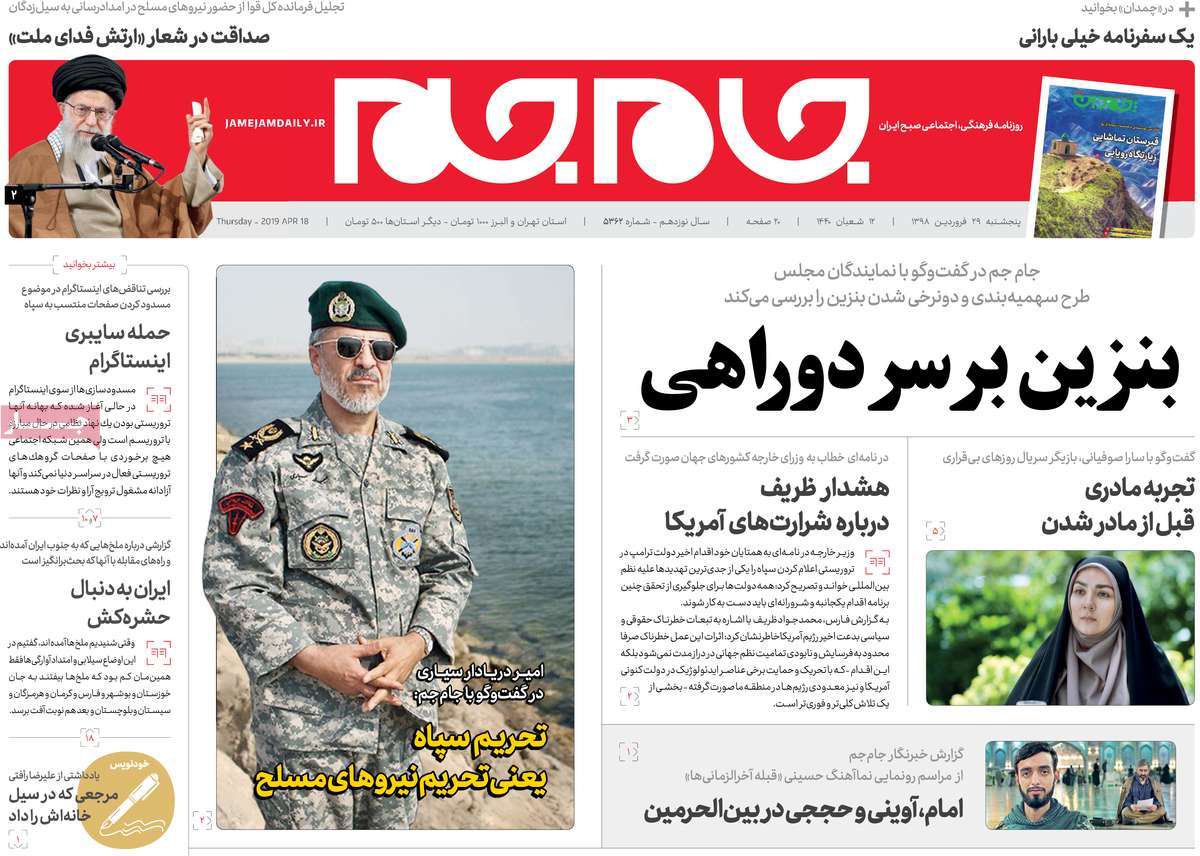 Javan:
1- Cavusoglu: We Support Iranian Brothers against US Sanctions 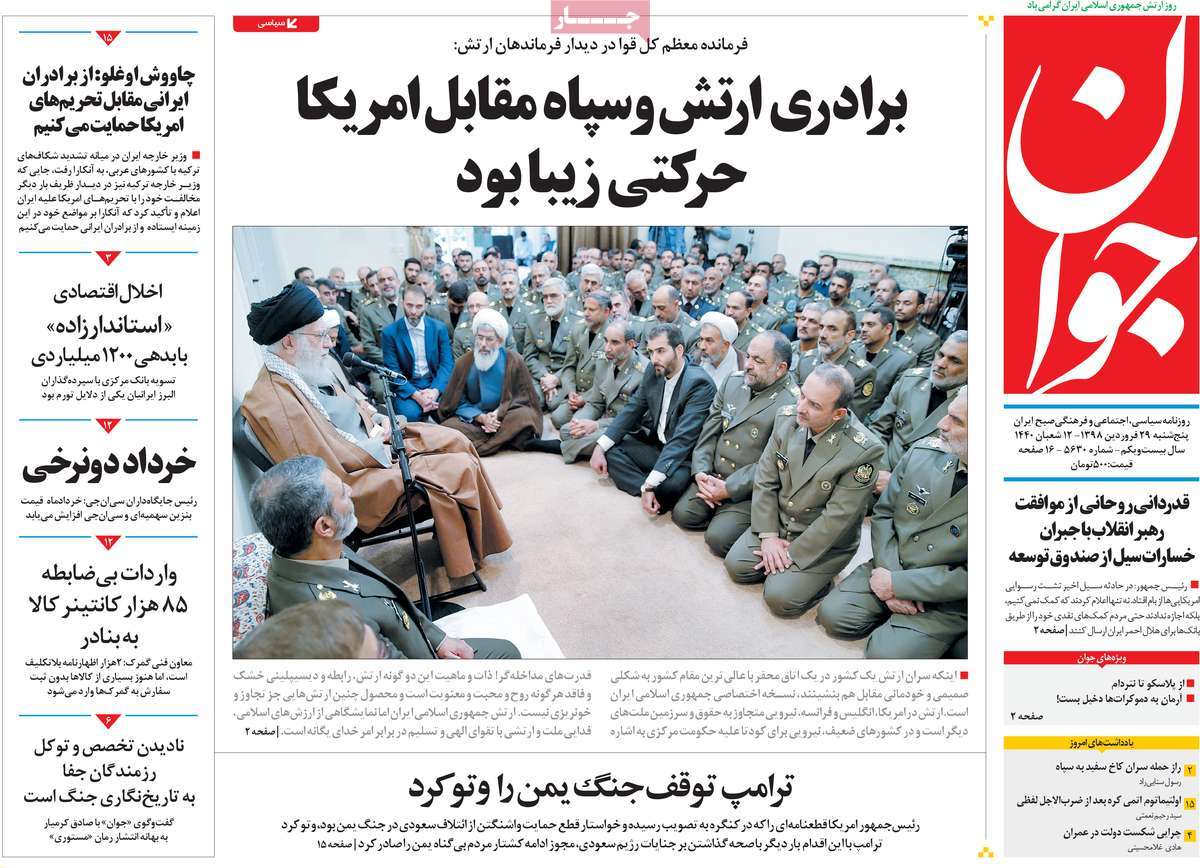 Kayhan:
1- Netanyahu: Arab Leaders’ Messages of Congratulations Made Me Excited 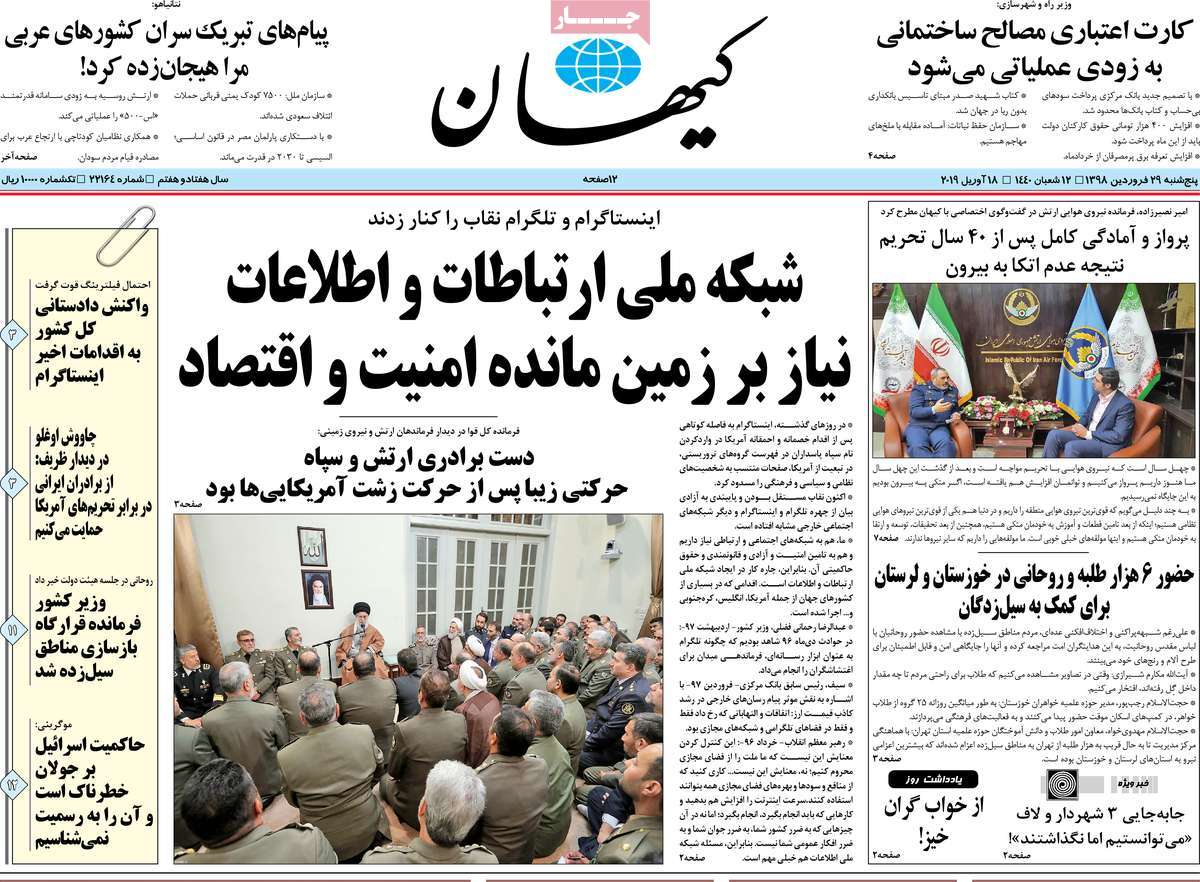 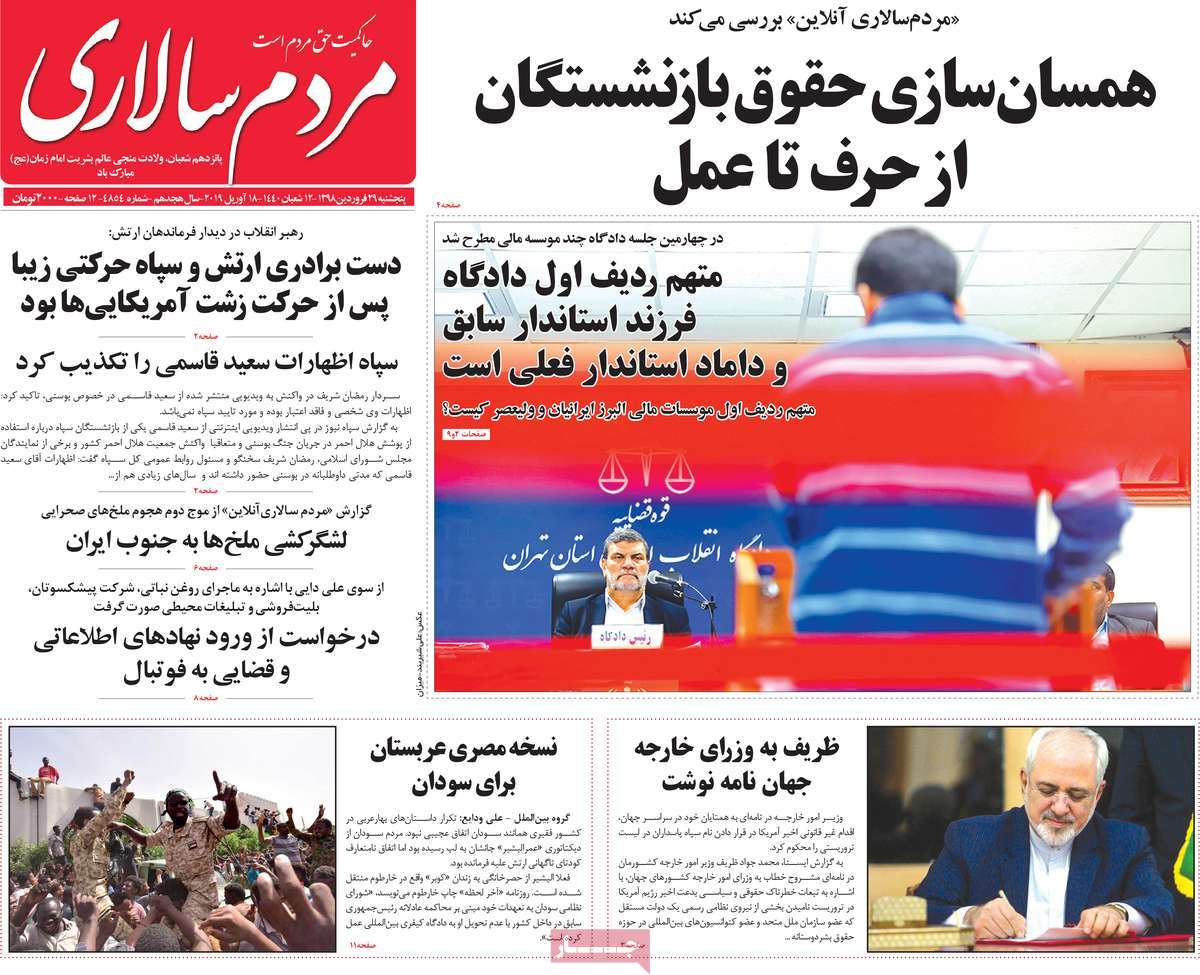 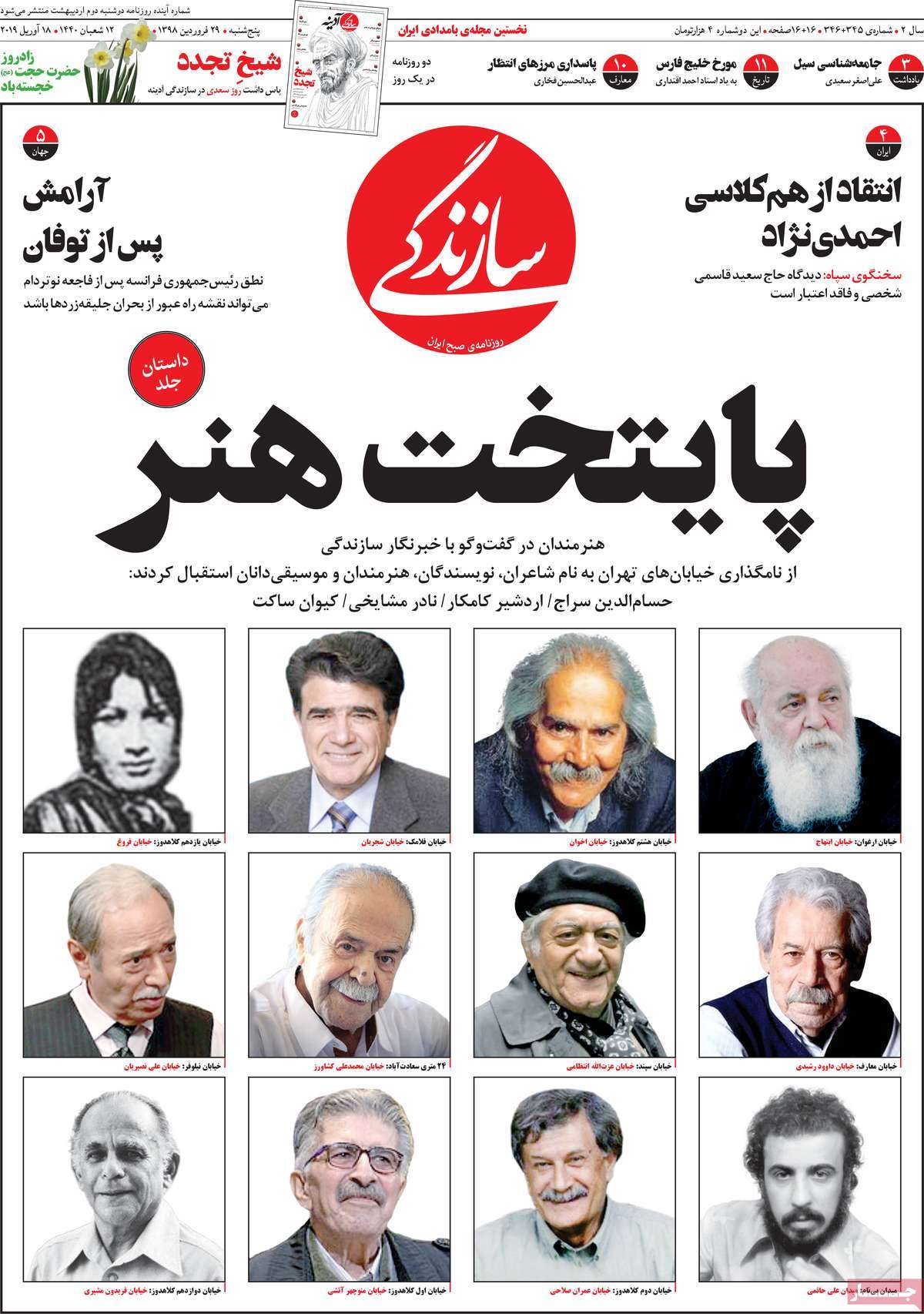 Shargh:
1- Rouhani: If US Leaders Were Wise, They’d Suspend Sanctions for One Year Because of Floods in Iran
2- Instagram May Be Blocked in Iran in Reaction to Recent Blocking 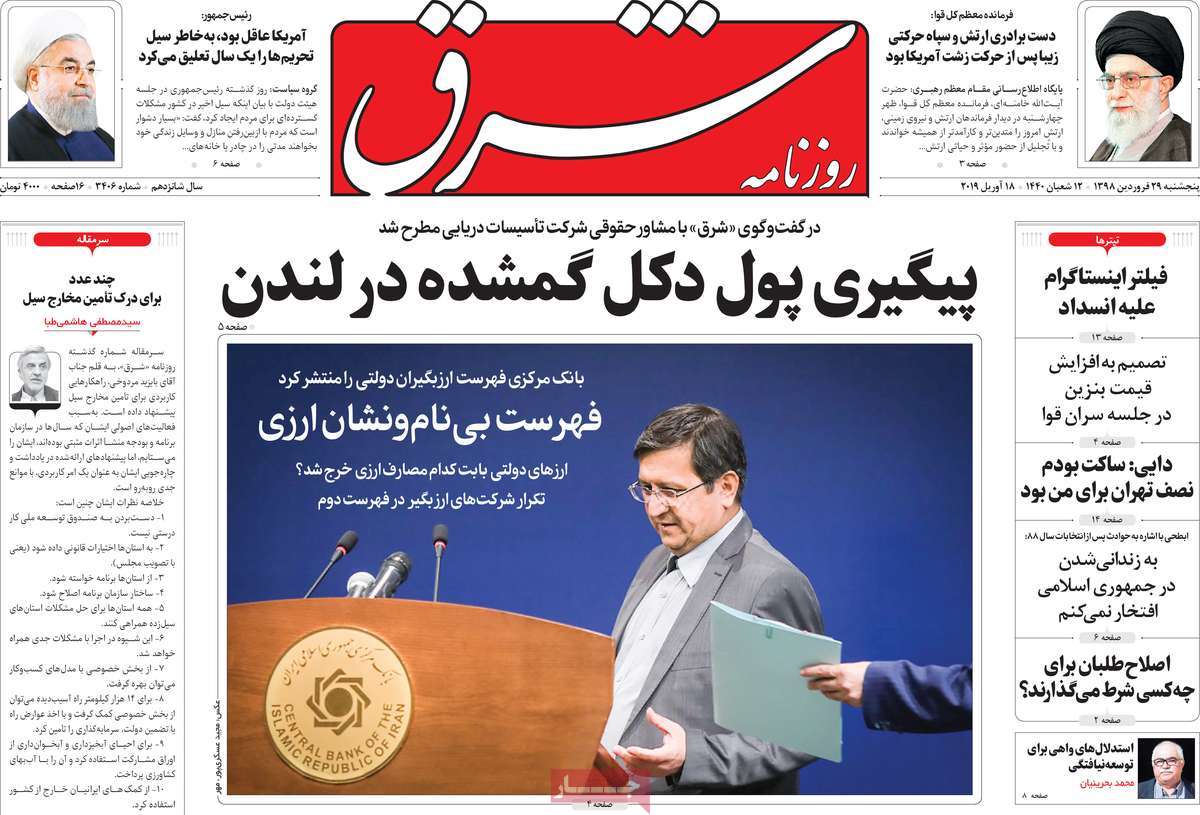 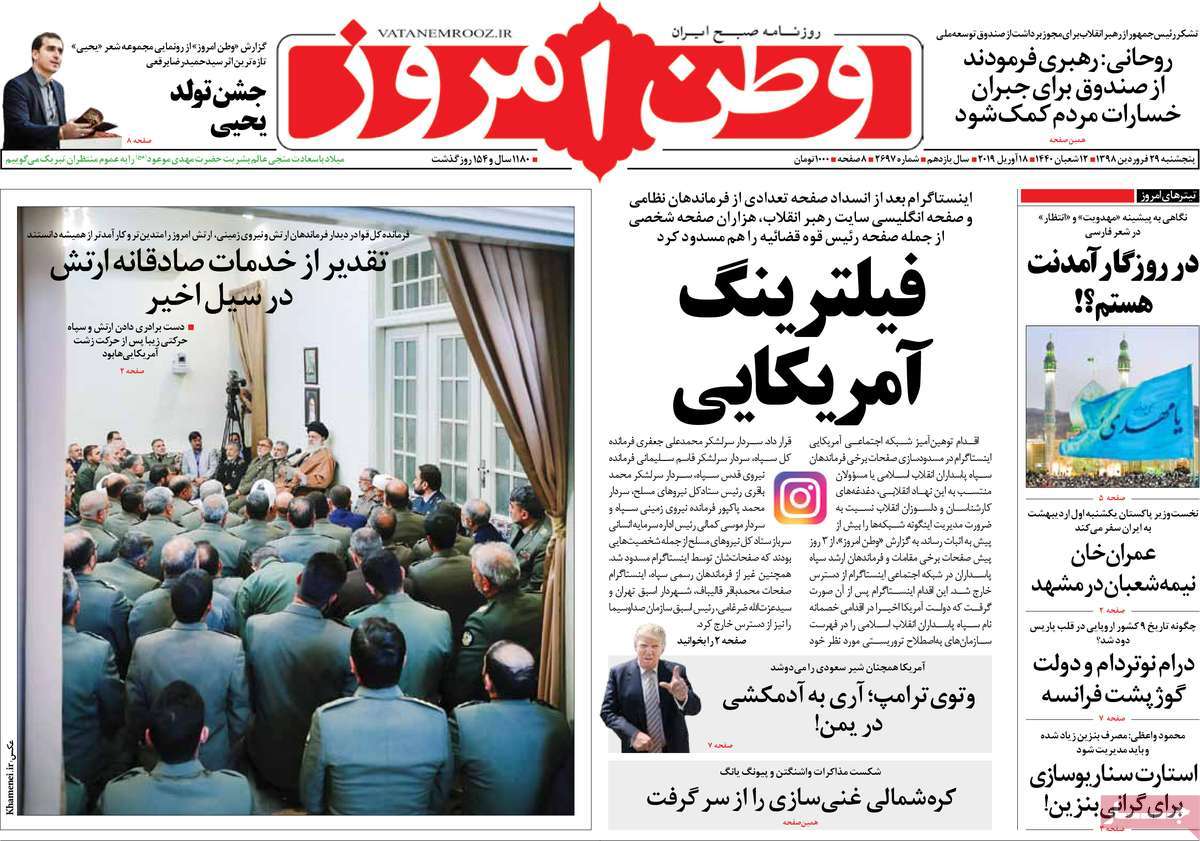