A female athlete whose career is built on ice 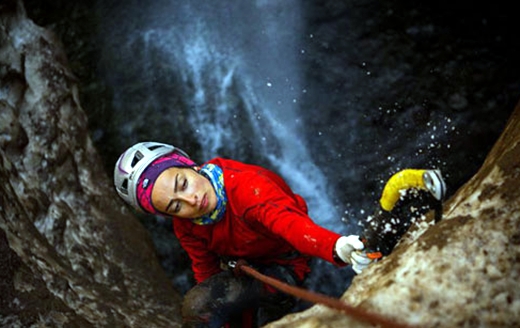 Iran’s female ice climber, who has won national and Asian medals, says she has set her sights on an Olympic medal.

She is not in the habit of walking on solid or hard earth. Zohreh Abdollahkhani, 31, is always doing climbing here and there. When she was a child, she started mountain climbing with her parents just for fun. At 18, she decided to do sports professionally.

In 2003, she took up rock climbing despite her coach’s opposition and two years later she won her first national medal. In 2010, Zohreh decided to embark on a profession that would later earn her a nickname: Iran’s icy girl. Her success came in a climbing trend: she placed third in the Asian Ice Climbing Championship [in 2014] and was invited to the ice climbing competition in Sochi during the 2014 Winter Olympics.

Alef.ir on December published an interview with the Iranian ice climber, who is also a national top student in aviation. The following is a brief translation of the interview:

Why rock and ice climbing?

[…] I started climbing with my parents. At first I didn’t think I would ever do professional sport. I simply didn’t want to focus on science and lead a one-dimensional life.

[…] I started climbing in 2003 and secured my first national medal in 2005. I have yet to pull off an international medal; now I stand tenth in the world.

[…] In 2014, I finished third in the Asian Ice Climbing Championship. In 2015, the world’s top 30 athletes were invited to the Olympic Games. Mr. Masoud Zeinali (who won a silver medal in the Asian Championship) and I represented Iran, and we were named as members of an inspiring team from Iran.

We are not given enough support. […] If we receive more support, the result would be better. When you take care of everything singlehandedly, the going gets tough.

The costs of ice climbing are high, because the equipment we use is imported and only a few countries possess the technology to make such devices. In Iran, only a few women are doing this sport professionally and the importer prefers to import the equipment and devices the male athletes use. […] Iran vs. other countries

The medal I won in the Asian games was the first medal a non-Korean athlete had secured. The Koreans had already secured all Asian medals. […] When the medal-awarding ceremony came to an end, the head of the Japanese team came over and thanked me, saying that what I did showed that a non-Korean too can collect a medal. It was a turning point in efforts to end the Korean dominance in the Asian ice climbing.

We went to the competitions on our own and nobody expected us to win medals. When we came home, those in charge couldn’t believe that we had been awarded medals. It is not the case in other countries. The athletes are treated differently; they are given credit and confidence to be able to win medals and titles. We in Iran did reverse engineering. First we won medals, then we said that such a discipline did exist.

I will forge on with my efforts as long as I think there is hope. I hope my hope will not be dashed. I always think of an Olympic medal and the [raising of the] Iranian flag. I hope this becomes a reality. Also I have a personal wish: to go to the Pole and do ice climbing there.

The environment has been one of my concerns all these years. Ice climbers can send images of ice melting and can tell the world of a disaster in the making. I think we can show these images to the world. […] After all, I cannot do ice climbing when there is no ice.

To do sports at a professional level, women need family support. A large number of girls abandon sports only because their husbands, fathers or men in their families do not lend them support. I was lucky I had my family’s support.

A woman such as Niloufar Ardalan, the captain of the national women’s futsal team lacked such a support. Many women make progress thanks to their spouses’ support. […]

A sense of confidence

Once I was asked what I would do if I were left in a desert. I said I would find a way out. To tell the truth, I’ve learnt it from sports: I suffer failures, sustain losses, cry and then wipe my tears and stand on my own two feet. I do not allow a problem to affect me for long. This is the spirit of sports; you have to stand up again. 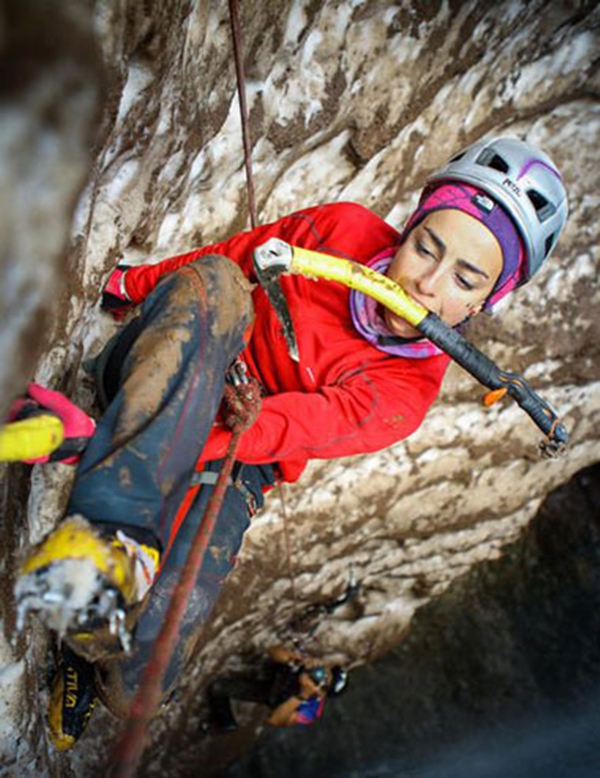