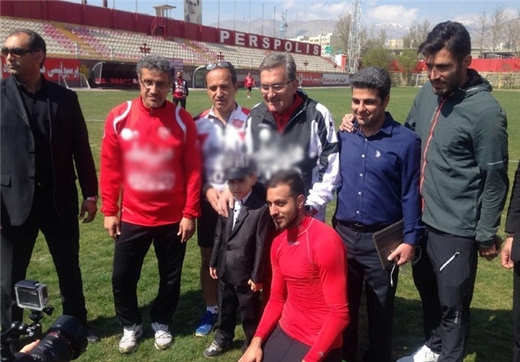 The dream of a 6-year-old haemophiliac boy came true – today, he became the CEO of Persepolis Football Club.

Something interesting happened at today’s Persepolis training session. A young boy suffering from haemophilia had always dreamt of becoming the Persepolis boss, so a group of documentary-makers from IRIB Channel 5 made his dream come true.

In co-ordination with the club’s leaders, this young child started his new job at Persepolis headquarters, sitting behind the CEO’s desk.

He also paid a visit to the team’s training ground. As a VIP, of course, during his visit he was accompanied by two bodyguards.

The young Persepolis CEO played football with Sosha Makani, Reza Nourmohammadi and Mohsen Bengar for a while, and chatted with other Persepolis players.

He even took – and scored – a penalty with Sosha Makani in goal. Sosha Makani gave him his gloves and the two took a photo together.

He met Branko Ivanković, the team’s manager, and discussed his ideas with him. He told the young CEO that he hopes that with the new executive leadership, Persepolis will win the championship this year, and qualify for the Asian Championship next year.

Persepolis is one of the highest supported teams in Iranian football. It is said in unofficial counts that the club has over 30 million fans.Persepolis Football Club, also spelled Perspolis, is a Persian Gulf Pro League professional football club based in Tehran, Iran. Persepolis F.C. was founded in 1963 and has been in the first division of Iranian football since 1968.
› Subscribe
Share
Facebook
Twitter
ReddIt
Email
Print
Telegram
WhatsApp
VK
LINE
Viber