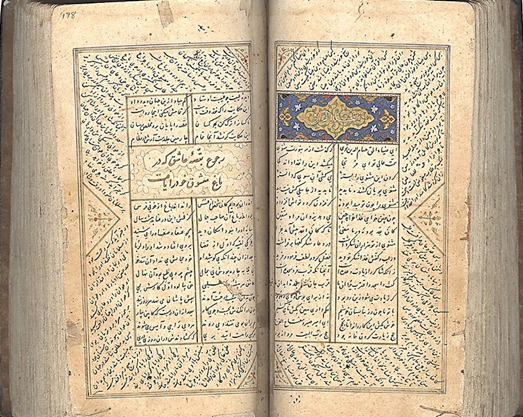 1000 Persian-speaking poets and literati signed a statement, entitled “Rumi Is a Poet from Balkh to Konya”, to voice their objection to a recent move by Iran and Turkey to jointly register the book Masnavi by the renowned poet Rumi in UNESCO, ignoring his birthplace Afghanistan.

Here’s IFP’s translation of a report by Tasnim on the statement:

National Library and Archives of Iran (NLAI) Director Seyyed Reza Salehi-Amiri met a Turkish cultural delegation led by the director of the Atatürk Culture Language and History High Commission, Derya Ors, in Tehran on Monday, May 30.

He later announced the two countries had reached an agreement to submit the Masnavi-ye Manavi, the masterpiece by Persian poet Mawlana Jalal ad-Din Rumi, to The United Nations Educational, Scientific, and Cultural Organization’s Memory of the World Register.

The move, however, provoked controversy among both Iranians and non-Iranians. Some believe that the joint registration would be a huge success for Turkey, who has been claiming [the nationality of] Rumi in recent years, without paying attention to Iran and Afghanistan as the original homelands of the famous poet.

In reaction to the joint submission, 1000 Persian-speaking poets in Iran and Afghanistan signed a statement, and urged Afghan cultural officials to increase their efforts in this regard to have the decision revised by Tehran and Ankara.

They want Afghanistan, Rumi’s birthplace, to be included in the submission as well.

Although Rumi is not restricted to a particular geographical boundary or nationality, he can help connect people to each other during a time when everyone is fanning the flames of war.

It seems that if Afghanistan takes effective measures, and if the objection of the poets is heard, a joint submission of the Masnavi by Iran, Afghanistan, and Turkey could strengthen the bonds between the three countries, which share strong cultural and civilizational backgrounds.

Some of the poets who signed the statement, however, are not very hopeful that their objection will be fruitful. For them, though, it is a kind of protest for certain officials to consider their cultural heritage more.

We are proud that Mawlana Jalal ad-Din Balkhi, the great Persian-speaking poet, is one of the well-known poets in all parts of the world. We are also pleased that people from other countries are proud of him. From our point of view, the fact that a poet came from Balkh, lived in Konya, and influenced the spiritual heritage across the region can be a source of unity and sympathy.

These territories have had variable and changing borders, names, and capitals throughout history, so much so that it is problematic to use the name of a particular modern-day country to refer to those old names. It might even lead to misinterpretation. Therefore, we believe that it is not appropriate to monopolize and limit these great figures to present-day political borders; rather, it is appropriate to know them by their birthplace and attribute them to the country of their mother-tongue.

Although Rumi spent the lion’s share of his life in Konya and is buried there, his scientific and literary personality was formed thanks to his science-loving family, especially his father Baha-ul-Din, who emigrated there from Balkh. His mystical personality was also influenced by Shams-e Tabrizi. His works have been taught in schools across the entire region, particularly in Afghanistan and Iran, and great poets, researchers, and artists from both countries have played their part in preserving his heritage.

Therefore, it seems unfair to submit the Masnavi, the prominent work of the God of Balkh [Rumi], from Iran and Turkey (given the present-day borders) to UNESCO, ignoring the birthplace of Rumi, Afghanistan. The move could lead to the irritation of the people who have grown up with the great poet, and who consider him to be a chain linking their societies together.

We believe that Turkey and Iran should reconsider their decision in order to avoid futile disputes between regional countries, and should add Afghanistan to the countries of origin in a bid to boost unity among these three nations. We also demand that the government of Afghanistan play a greater role in these interactions and attributions.

A group of Persian-speaking poets, story-writers, researchers, artists, and literati.”

Salehi-Amiri, who is also an advisor to President Hassan Rouhani, noted after his meeting with the Turkish delegation that Rumi is one of the cultural points shared by Iran and Turkey. However, many voiced their objections, saying, “Why should we share Rumi with Turkey? He’s ours! What does Turkey have to do with the Masnavi?”

Farhad Nazari, the director-general of the Office for Registration of Historical Works, told ISNA that the Masnavi is going to be registered as the most important mystical work in Persian, and the joint submission does not confirm Turkey’s claims about Rumi’s nationality.

Any criticism, objection, and sensitivity on the issue is valuable, he noted, adding, however, that “The registration of the Masnavi in cooperation with Turkey does not at all imply a confirmation of Turkey’s claim as to the Turkish nationality of Rumi.”

“It’s very simple. We proposed the book Masnavi [to be registered in UNESCO], and since the oldest and most complete version of Masnavi is in Konya, we jointly submitted it with Turkey. This was just because an important version of the book is in that country,” he went on to say.

“Even if the version had been in Oxford, Iran would have jointly submitted it with Britain,” he added.

Nazari also pointed to Estakhri’s Al-Masaalik Wa Al-Mamaalik, which was jointly submitted and registered by Iran and Germany to UNESCO’s Memory of the World Register because an ancient version of the book was kept in Germany.

“Does that mean Estakhri was a German author?” he asked.