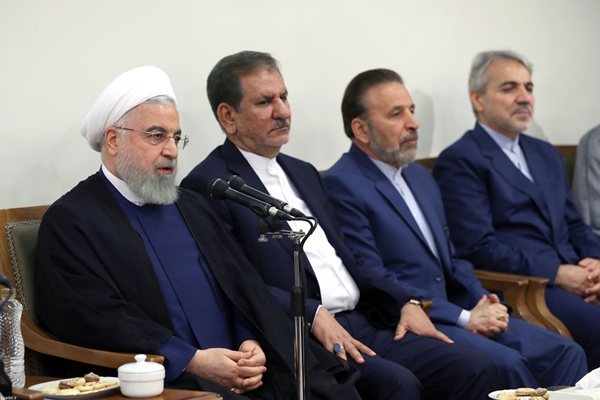 Iranian President Hassan Rouhani says international waterways will not be as safe as before if Iran’s oil exports are zeroed out.

“World powers know that in the case that oil is completely sanctioned and Iran’s oil exports are brought down to zero, international waterways can’t have the same security as before,” Rouhani said on Wednesday.

He made the remarks in a meeting with Ayatollah Seyyed Ali Khamenei, the Leader of Iran’s Islamic Revolution.

“So unilateral pressure against Iran can’t be to their advantage and won’t guarantee their security in the region and the world,” Rouhani added.

He further pointed to Iran’s move to reduce its JCPOA commitments, saying, “We have chosen the right path in reducing our commitments, and we have reiterated that there is a limit to our patience.”

He also noted that if all organs and branches stand together and support each other, we will overcome the sanctions with a faster pace, and bring the United States to its knees.

Washington has been tightening the screws on Tehran’s main source of income, aiming to cut Iran’s oil sales to zero, after President Donald Trump re-imposed sanctions on the Islamic Republic in November.

The US withdrew last year from an international nuclear deal signed with Tehran in 2015. It is ratcheting up sanctions in efforts to return Iran to negotiating table for a new deal to curb the country’s missile capabilities and its anti-Israeli role in the region.

Lately, the US has raised the ante by ordering military reinforcements, including a strike group, B-52 bombers and Patriot missiles, to the Middle East to confront unspecified Iranian threats.

Earlier this month, Iran’s Parliament speaker Ali Larijani said the United States has had no success in its “maximum pressure” campaign against Tehran even as American sanctions have impacted the Iranian economy.

“The Americans have not achieved any success against Iran. They wanted to bring oil sales down to zero but they did not succeed,” Larijani told a parliament session in Tehran on August 6.

“Through economic pressures, they want to have Iran stuck in internal problems. They have ratcheted up pressure on people to stir economic discontent,” he said.

China and other countries are receiving oil shipments from a larger number of Iranian tankers than was previously known, The New York Times reported early August.

At least 12 Iranian tankers have loaded and delivered oil across Asia and the Mediterranean since May 2, the paper said.

At least six of those ships unloaded their cargo at ports in China, while other ships have sailed to the Mediterranean through the Suez Canal, it added.