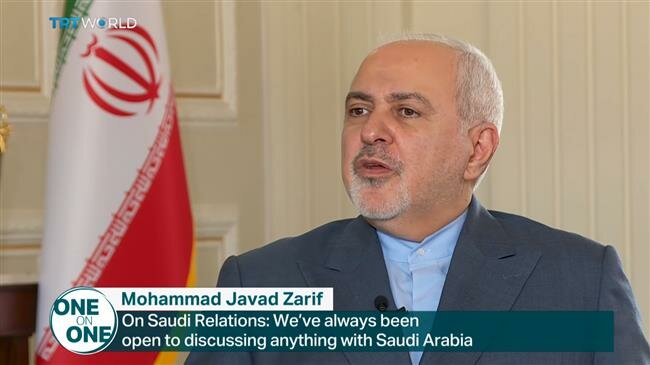 Iran's foreign minister says the country welcomes efforts by intermediaries to arrange talks with Saudi Arabia, including those by Pakistani Prime Minister Imran Khan who is due to arrive in Tehran on Saturday.

“We’ve always been open to discussing anything with Saudi Arabia. Saudi Arabia is our neighbor. We’re going to be here together permanently,” Mohammad Javad Zarif said in an interview with Turkey’s TRT World.

“We don’t have any choice but to talk to each other, and we have been open to talking to Saudi Arabia either directly or through intermediaries,” Zarif noted.

Khan will embark on an official visit to Iran and Saudi Arabia as part of Islamabad’s efforts to defuse increasing tensions in the Middle East, diplomatic sources said Friday.

He will on Saturday leave Islamabad for Tehran, where he is scheduled to meet Iranian President Hassan Rouhani on Sunday. The prime minister will later in the day travel to Riyadh for meetings with the Saudi leadership.

The announcement of the Pakistani prime minister’s visit comes after The New York Times quoted officials of Iraq and Pakistan as saying that the Saudi crown prince had asked the leaders of those two countries in recent weeks to speak with their Iranian counterparts about de-escalation.

In his interview with TRT, Zarif emphasized that Saudi Arabia needs to start good relations with its neighbors if it wants to be secure.

“Buying weapons will not buy you security. If Saudi Arabia wants to be secure, the best way is to end the war in Yemen, to start good relations with its neighbors and the neighborhood, and not to trust the US,” he said.

The top diplomat also referred to a peace plan, officially called Hormuz Peace Endeavor (HOPE), proposed by President Hassan Rouhani during his recent speech at the annual meeting of the UN General Assembly, saying the initiative calls on “all eight countries in the Persian Gulf region to join in an attempt to bring peace through dialogue.”

“We hope it can be discussed and further enriched by our neighbors,” he added.

On Tuesday, Zarif stressed that Iran will be a companion of Saudi Arabia if the kingdom changes course and pursues regional issues at the negotiating table instead of “killing people.”

“Under the circumstances that the Saudis have developed an interest in talking with Iran, if they pursue regional issues at the negotiating table, not by killing people, they will certainly have the Islamic Republic along with them,” Zarif said.