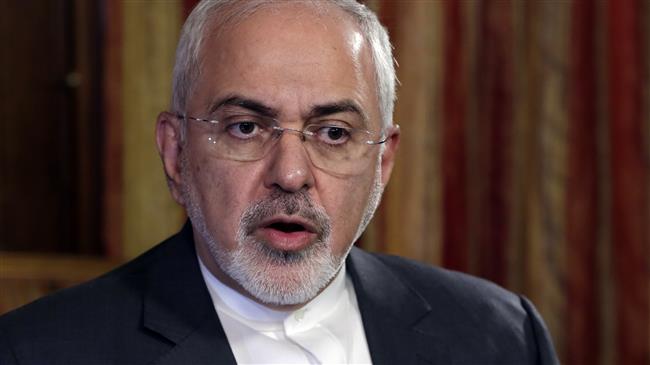 Iran's Foreign Minister Mohammad Javad Zarif says the claims about an Iranian diplomat arrested over allegations of plotting a bomb attack on a meeting of the notorious anti-Iran terrorist group, the Mujahedin Khalq Organization (MKO), in France constitute a "sinister false flag ploy."

Belgian authorities said on Monday that the Iranian diplomat had been arrested along with a 38-year-old man and a 33-year-old woman, suspected of plotting a bomb attack on the meeting in Paris attended by US President Donald Trump’s lawyer, Rudy Giuliani, and several former European and Arab ministers.

Taking to his official Twitter account on Monday, Zarif said, “How convenient: Just as we embark on a presidential visit to Europe, an alleged Iranian operation and its ‘plotters’ arrested.”

The top Iranian diplomat emphasized that the Islamic Republic “unequivocally condemns all violence and terror anywhere, and is ready to work with all concerned to uncover what is a sinister false flag ploy.”

A joint statement by the Belgian prosecutor and the intelligence services claimed that the two suspects in Belgium were intercepted by Belgian police on Saturday, with 500 grams of TATP, a home-made explosive produced from easily available chemicals, as well as a detonation device found in their car.

It added that the diplomat at the Iranian embassy in the Austrian capital, Vienna, was arrested in Germany. The statement gave no further details about the diplomat other than saying the diplomat was suspected of having been in contact with the Belgian pair arrested.

Heading a high-ranking politico-economic delegation, Iranian President Hassan Rouhani arrived in Zurich, Switzerland, earlier on Monday at the invitation of his Swiss counterpart, Alain Berset. Switzerland is the first leg of Rouhani’s European tour, which will also take him to Austria.