Zarif insists on continuing nuclear talks ‘as long as possible’ 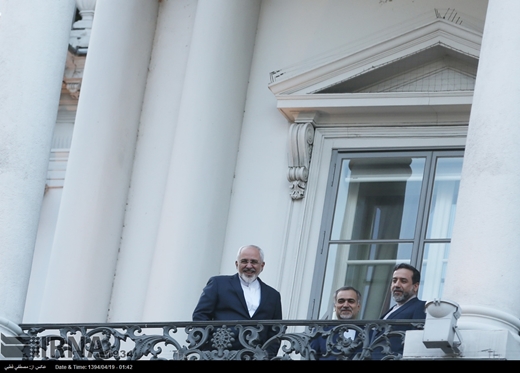 Iranian Foreign Minister Mohammad Javad Zarif on Thursday made clear nuclear talks would continue as 'long as possible' to hammer out a final nuclear accord.

Speaking to the press from the balcony of his hotel in Vienna, Zarif reiterated that he was prepared to continue the ongoing negotiation process with six world powers — the United States, Russia, China, France, Britain and Germany.

Asked about his interpretation of his twitter message ‘Mark my words; you can’t change horses in the middle of a stream’, Zarif smiled and replied, I wanted you to guess, otherwise I would have said it in a more straightforward way.

I wanted to make this a little bit interesting, Iran’s top diplomat said.

Another reporter asked about the time the Iranian team will return home, Zarif said, “We will leave God willing.”

Asked whether he was optimistic of the accord, Zarif said, “Had we not been, we would not have been here.”

Talks on a comprehensive nuclear deal were scheduled to continue through the night and tomorrow as foreign ministers of the seven countries were trying to find ways to overcome lingering differences on a final agreement.

Deputy Foreign Minister Abbass Araqchi and Presidential Aide, Hossein Fereydoun were also at the Palais Coburg balcony along Zarif at the time of the press conference.