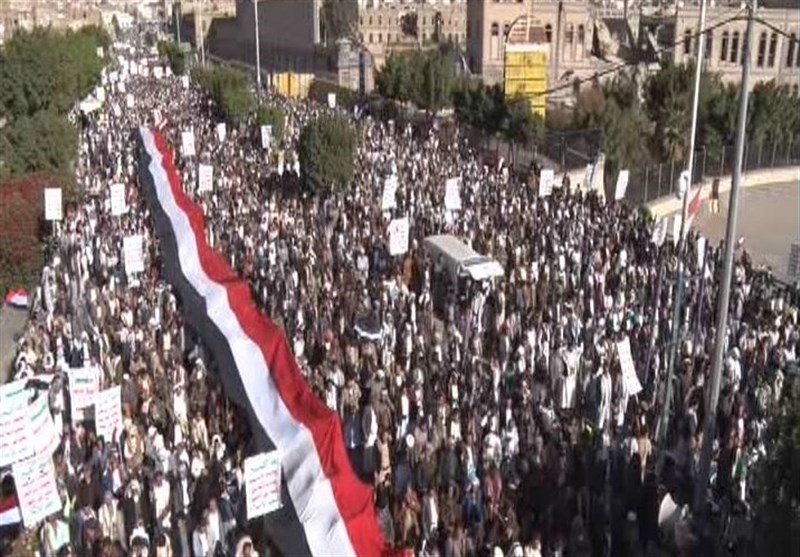 The Yemeni people have taken to the streets en masse across the country to condemn the Saudi-led war coalition’s latest bloody airstrikes in northern Sana’a Province, which claimed dozens of civilian lives.

The large protests were held in the capital, Sana’a on Friday, hours after Saudi-led warplanes bombarded a temporary detention center in Sa’ada and left over 180 people, including African migrants, dead or injured.

Reports said the fatalities included three children and 60 adults, with the number expected to rise as efforts are still underway to save those trapped under the rubble.

The angry protesters shouted slogans against the “aggressor coalition” and its key parties, namely Saudi Arabia and the United Arab Emirates (UAE), which they say have been committing war crimes in Yemen with the support of the US and their other allies.

The demonstrators also renewed the call for the coalition to lift the crippling siege imposed on the country since the onset of the Saudi-led war in early 2015.

In a statement, Yemen’s INSAN human rights organization slammed the Saudi-led raids as a major human rights violation and war crime, criticizing the international community’s silence in the face of such deadly acts of aggression.

Such double standards applied to the issue of human rights expose the true nature of so-called rights organizations and the countries claiming to be advocates of human rights, it said.

It also called on the international community to adopt a transparent position against the crimes committed by the Riyadh-led military coalition against Yemen.