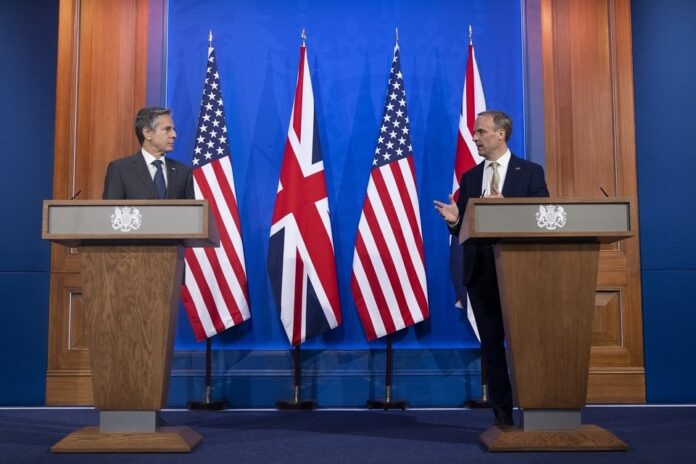 Member of Yeme’s Ansarallah group’s political bureau Mohammed Bakhiti termed the Sunday’s attack against Riyadh a “natural reaction” to actions of the aggressors, as Washington and London hit out at the missile and drone operation.

US Secretary of State Antony Blinken has termed the operation “completely unacceptable”, and said such attacks “threaten the lives of the Kingdom’s residents, including more than 70,000 US citizens”.

“We once again urge the Houthis to agree to a comprehensive ceasefire immediately and to stop these cross-border attacks and attacks inside of Yemen, particularly their offensive on Ma’rib, which is exacerbating the humanitarian crisis and prolonging the conflict,” he added.

The British government also reacted to the military operation with Foreign Secretary Dominic Raab calling it the “reckless behavior” by the Ansrallah fighters, while blaming Iran for “facilitating it”.

Yemeni troops claimed responsibility for the retaliatory attack, stating that armed forces have used 16 drones and ballistic missiles to hit targets deep inside Saudi Arabia in their latest operation.

Bakhiti has termed the operation a “natural reaction” to actions of “the aggressor countries”.

Referring to recent bombings of Ma’rib, a strategic gateway from the central highlands to southern and eastern Yemeni provinces, by Saudi Arabia and its allies in the war, the senior official called out the international community’s double standards.

“Recently, they were proud that they bombed Ma’rib 170 times,” he said, adding that “and we did not see any condemnation from outside”.

He stressed that the Sana’a-based National Salvation Government in Yemen seeks “complete liberation of the country’s lands” from the foreign occupying forces.

“A distinction must be made between liberating Yemen from all foreign occupying forces and a monopoly on political decision-making,” he noted.

He asserted that Ansarullah does not intend to monopolize political decision-making in the Yemeni capital, but strives toward a process that takes along all groups across the political spectrum.

“We are not targeting any political spectrum, our goal is to liberate Yemen from foreign forces,” al-Bakhti said, adding, “In addition, there is military pressure on Riyadh to force it to accept a political solution after the depth of its territory is targeted.”

The Ansarullah official further underlined that peace in the war-ravaged country is not possible “except by lifting the siege, stopping the aggression and completely withdrawing foreign forces”.

Referring to the movement’s stance on secessionism in southern Yemen, the official underscored “not all people” want separation.

“We are ready for dialogue, even with those who want secession,” he declared, noting that most people in the south want to continue the struggle for the liberation of the occupied territories.

Yemen has been battling foreign aggression and chaos since 2015, when Saudi Arabia and its allies launched a devastating war against the poorest Middle Eastern country in a bid to reinstall the unpopular government of Abd Rabbuh Mansur Hadi in Sana’a.

The war while failing to reach its objectives has killed hundreds of thousands of Yemeni civilians and triggered the worst humanitarian catastrophe in modern history.