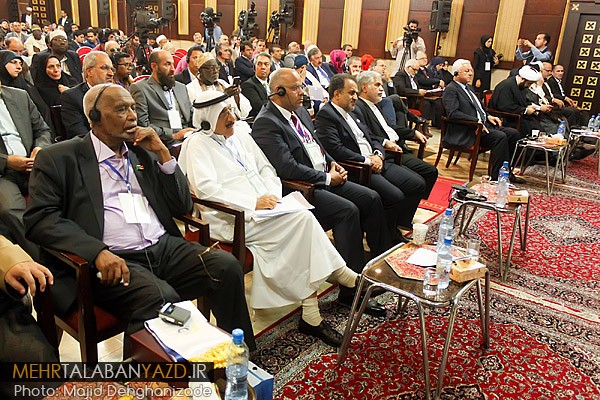 The World Islamic Forum concluded its 7th summit in the Iranian city of Yazd by issuing a statement in which member states were called on to enhance their solidarity and cooperation, particularly against such phenomena as Islamophobia, extremism, and terrorism. Text translated by IFP from Mehrtalabane Yazd.

Nearly 100 guests from 35 countries attended the two-day international event, which kicked off on May 24, and was supported by the Iranian Foreign Ministry. The theme of the Forum was “Strategic Communications: Reference Values, Institutions and Individuals.” The Forum is supported by the Organization of Islamic Cooperation (OIC).

The important goals of the Forum included bringing global Islamic think-tanks closer together and discussing the issue of a world free from violence and extremism.

The Iranian President’s Advisor on Ethnic Groups and Minorities’ Affairs Ali Younesi, as well as a number of thinkers from different countries, attended the closing ceremony of the Forum, held on Wednesday, May 25.

The Forum wrapped up its two-day summit by releasing a 22-article statement read aloud at the closing ceremony. The statement underlined the need for promotion and reinforcement of solidarity and unity among member states.

It also called on Muslim states to be internationally responsible and fight the root causes of immigration, displacement, and the refugee crisis, as well as their social repercussions.

The statement further expressed concern over the spread of Islamophobia and the exacerbation of actions against Muslims in the West, and strongly condemned the attacks on Muslims and Islamic centres, as well as social restrictions placed upon the followers of Prophet Muhammad (PBUH)’s religion.

It thus urged the countries that host Muslim minorities to take necessary action against such Islamophobia.

The member states also hailed the resolutions passed by the United Nations General Assembly on the Dialogue of Civilizations and the World against Violence and Extremism [WAVE], both of which were proposed by Iranian presidents.

The ratification of such resolutions not only prepares the grounds for increased understanding, enhanced unity, fewer causes for conflict and disputes, and finally a decrease in violence, extremism, and terrorism, but it would also encourage the international community to pursue the implementation of such plans more seriously.

The Forum voiced its concern over the support provided for violent and extremist thought being propagated via public media in the name of freedom of speech, and also denounced any politically-motivated discrimination, limitation, and censorship against independent media.

The statement also underlined the necessity for a stronger role to be played by academics, religious authorities, and scientific institutions in the expansion of strategic communications, and called for further dialogue among religions, cultures, and more respect for human rights, as well as measures to remove the root causes of extremist and violent ideologies.

The Forum stressed that the emergence of Takfiri terrorist groups and the increase of their actions in different parts of the world, particularly in the Middle East and North Africa, are the result of plots by common enemies to cause rifts among Muslims and war between Islamic states.

Therefore, it added, the elites of the Muslim world should join hands and show resistance to these plots hatched by common enemies and their implicit and explicit support for extremist and terrorist phenomena.

The Forum referred to the issue of the occupying Israeli regime and its uncontrolled crimes against Muslims, particularly the people of Palestine and Lebanon, as the biggest problem of Muslim world, and urged all member states to spare no effort in countering the challenge and finding solutions to the issue.

It finally urged the international community including all countries, think-tanks, researchers, and religious authorities to fight the ISIS terrorist group, emphasizing that it is “unconstructive” and “wrong” to divide terrorists into “bad” and “good” groups.