Who Will Muslim Americans Vote for in the US Presidential Election? 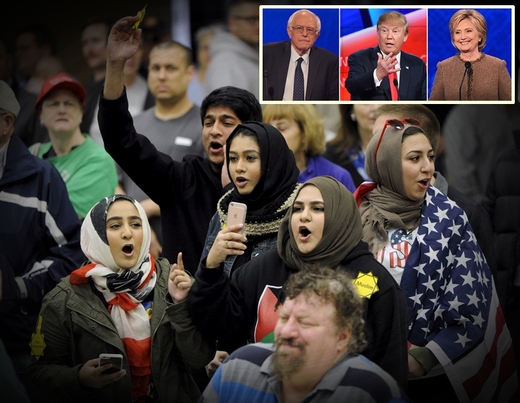 Foad Shams: Muslims in America are in a small minority (3.3m among 318m American citizens), but today, the issues regarding their rights are some of the most important topics of the US elections.

Donald Trump, the Republican Party candidate, has created a heated atmosphere in America by attacking Muslims and Islam. On the other side, Bernie Sanders has supported the Muslim society of the US.

Trump recently called Islam and Muslim enemies of the USA. His speech was criticized by US-based Islamic societies and Muslim-Americans generally. This has gone so far that one Michigan student’s anti-Trump slogan was “American Muslims Unite against Trump”.

It is interesting that, on the other side, Bernie Sanders has clearly supported the Muslim citizens of America. In several of his speeches, he has invited Muslims to the podium. He has also visited a few mosques and Muslim centres. He even invited a veiled girl onto the stage in one of his speeches, and treated her with kindness.

Bernie Sanders, who describe himself as a social democrat, showed himself reluctant to improve relations with Iran, and also advocates against any military interference in the Middle East. He has even strongly condemned America’s past policies regarding launching military action in Islamic countries like Iraq and Afghanistan. On top of that, he says that the 1953 Iranian coup d’état was a significant error.

He strongly supported Mosaddegh’s legal government, and called the American-influenced coup d’état against him an irreparable mistake.

Sanders, who comes from a Jewish family himself, criticized any religious discrimination, and said that Muslims are normal citizens who shouldn’t face any discrimination because of their religion.

Perhaps this is why he could pick up many votes in Michigan, since there is a big Arab Muslim society there. Michigan, in fact, is the Muslim centre of America. Usually, Arab-origin citizens and other Muslims don’t play an important role in American elections. This time, however, considering that Muslims are at the centre of media attention and in the election debates, their vote will be important, at least in a symbolic way.

The statistics are similar in other Michigan cities with significant Muslim populations. Another point about Michigan is the number of Lebanese immigrants who migrated to that region in the early 1980s. These Lebanese- and Arab-origin immigrants are now mostly American citizens. Among them, there are both Sunni and Shia Muslims.

According to the statistics, the majority of the votes from Shia and Lebanese Americans went to Sanders. Of course, considering the number of Muslims and Arabs who are American citizens, their votes won’t have a major effect in the election, but their votes for Sanders symbolize the desire of the US Muslim society for a leader who not only doesn’t see Islam as an enemy, but also wants to stop any discrimination against Muslim citizens.