Western Coalition Not Sincere in Fight against Terrorism: Iran’s Leader 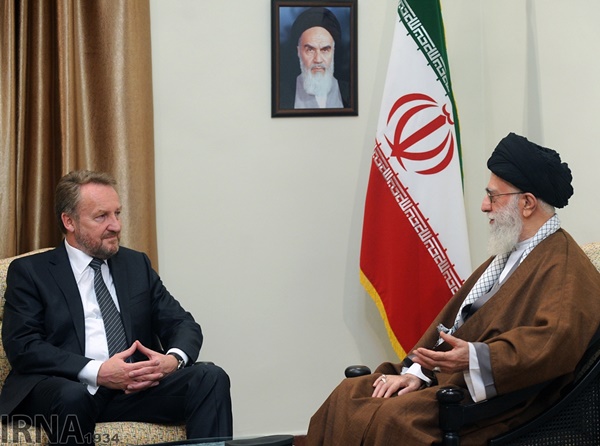 Leader of the Islamic Revolution Ayatollah Seyyed Ali Khamenei said the military coalition established by Western governments allegedly to combat terrorism is not real and does not seek to uproot the malicious phenomenon.

Speaking in a meeting with the chairman of the Presidency of Bosnia and Herzegovina, Bakir Izetbegovic, in Tehran on Tuesday, Ayatollah Khamenei refuted the sincerity of the Western governments’ military coalition in combating terrorism, saying that although the coalition “may enter into fight with terrorists in some cases, they are not genuinely after uprooting terrorism either in Iraq or in Syria and their bad and evil policies are exacerbating problems facing humanity on a daily basis.”

The Leader pointed to the overflow of Takfiri terrorism into Europe and the potential aggravation of this problem in the future, stating, “The Arab region is apparently the birthplace of this phenomenon but the American government and some European governments are in reality the main factors behind the occurrence of such events.”

Ayatollah Khamenei said the resolution of the current crises hinges on an understanding of their causes and the existence of the determination to resolve them.

“The humiliation of young Muslims in some rich and powerful European countries creates grounds for them to join deviant terrorist groups such as ISIS and these humiliated youths embark on bombing and killing upon their return to Europe,” the Leader added, Press TV reported.

Elsewhere in his remarks, Ayatollah Khamenei pointed to the history of friendly relations between Iran and Bosnia and Herzegovina and underlined the Islamic Republic’s full readiness to enhance cooperation and interaction with the Balkan country in different political and economic fields as well as in international circles.

Ayatollah Khamenei emphasized that independent countries must reduce rifts and conflicts by strengthening relations and refusing to be swayed by the policies of arrogant powers.

Izetbegovic, for his part, described his talks with Iranian officials earlier in the day as successful and hoped the friendly ties between the two countries would lead to effective economic cooperation.

He underlined that Bosnia and Herzegovina’s policy is to expand relations with Muslim countries.

Izetbegovic further described Takfiri terrorism as a dangerous disease and said all prominent figures in his country decisively reject and condemn the phenomenon.

Iranian President Hassan Rouhani was also present at the meeting, as reported by Tasnim.

Heading a high-ranking political, economic, and cultural delegation, the Bosnian official arrived in the Iranian capital on Tuesday morning on a four-day visit.