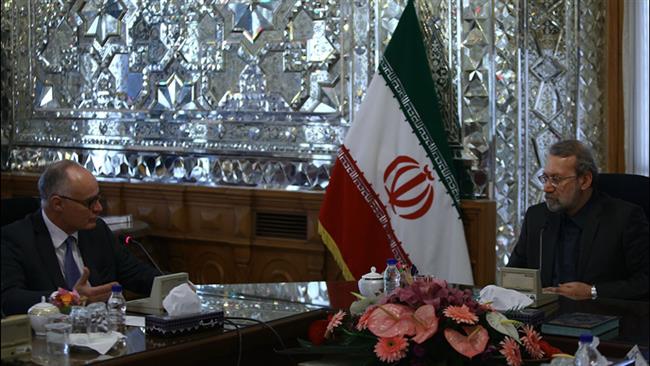 Parliament Speaker Ali Larijani has slammed the West’s double standards in the Middle East, calling for an end to foreign support for terrorists operating in the region.

“If Western countries seek to fight terrorism, they must first change the existing mindset toward them because regional countries believe that the West is using the issue of terrorism as a tool [to achieve their objectives],” Larijani said in a meeting with Chair of the UK Parliament’s Foreign Affairs Committee Crispin Blunt in Tehran on Saturday.

The Iranian Majlis speaker also stressed the importance of developing a common understanding about ways to battle Daesh Takfiris and other terrorist groups.

Larijani emphasized that regional nations have no trust in Western states due to their double standards in the Middle East.

He said sustainable security should be established in the region, adding, “Interference of countries such as the United States has not only failed to restore stability in the region, but intensified problems of [regional] states.”

The British parliamentarian, for his part, said insecurity and instability in the Middle East would be detrimental to all countries in the world.

He added that Britain seeks to prevent the spread of terrorism with the help of major regional countries like Iran.

Time is ripe for the establishment of stability in the Middle East, Blunt said.

He also stressed that London seeks to restore its relations with regional countries.

Heading a parliamentary delegation, Blunt arrived in Tehran on Friday for a three-day visit at the invitation of Alaeddin Boroujerdi, the chairman of the National Security and Foreign Policy Committee of the Iranian Parliament.