Iran Front Page
Home Politics Local We are open to reason; so we don’t need to be worried:... 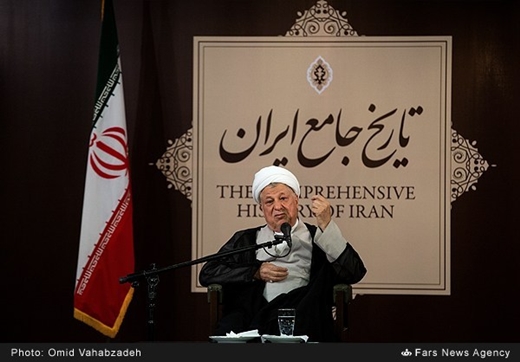 The top councilor criticized those who view interaction with the rest of the world as humiliating, urging them to stop shouting slogans that interfere with the country’s progress.

Chairman of the Expediency Council Ayatollah Akbar Hashemi Rafsanjani has criticized those who view interaction with the rest of the world as humiliating, urging them to stop shouting slogans that interfere with the country’s progress.

According to Entekhab.ir, the top councilor, who was speaking at the launch ceremony of The Comprehensive History of Iran on Tuesday, said the Islamic Republic which listens to the voice of reason should not be afraid of dialogue and interaction.

Ayatollah Rafsanjani lashed out at those who seek to wall off the country and live without interaction with the international community, and said sanctions have placed a very huge burden on everyday Iranians.

He said there are no religious justifications for failure to interact with others, citing the instructions of the Prophet Muhammad. “Of course, that [resisting interaction] is not what the Iranian public wants; that is what some people in positions of power pursue. What they are saying is troublesome.”

He blamed the minority in question for creating conditions that have resulted in great universities in the world not admitting Iranian students, and said, “We need to pave the path of interaction with the rest of the world. That is what wisdom and religion dictate. Extremism and ossification do not work.”