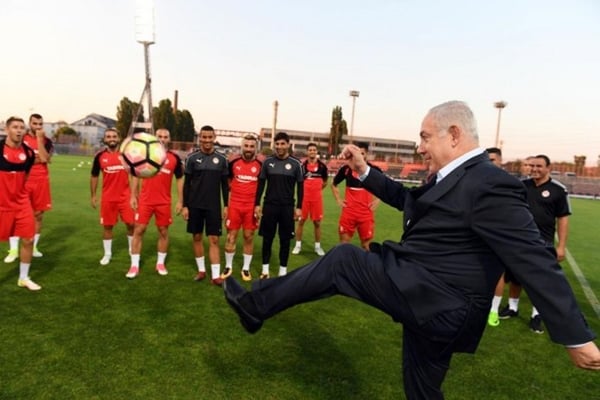 Ray Al-Youm said in a recent article that Netanyahu’s only achievement during the visit was that he managed to watch Britain-Croatia FIFA World Cup match in the stadium.

“During his meeting with Putin, Netanyahu desperately asked him to make Iranian forces in Syria leave the country but once again his demand remained unanswered,” Rai Al-Youm was quoted as saying in a report by YJC.

According to the newspaper, Israel’s call for withdrawal of Iranian forces from Syria seems illogical particularly after the successes achieved by Iran and its allies in the war-torn country.

Netanyahu visited Moscow this week for the third time since the beginning of 2018 to desperately convince Putin to make Iranian forces leave Syria because Tel Aviv regards Iran’s presence in Syria as a threat to its entity.

“Netanyahu’s demand was rejected once again and the only achievement of his visit to Moscow was to watch Britain-Croatia match in the semifinal stage of the World Cup,” the report said.

The newspaper added Putin is not Netanyahu’s servant to follow his orders. “Meanwhile, withdrawal of Iranian forces from Syria is not in the interests of Russia because it would have dire consequences for Russia including the destruction of all the achievements made so far in Syria and the Western Asia.”

Rai Al-Youm raised this question why Putin should meet Netanyahu’s demand. “Russia regards Israel as the strategic partner of the US and the main source of instability in the region.”

Russian Foreign Minister Sergei Lavrov dismissed Israel’s demand on Iranian forces as hegemonic and bullying. “This means Russia doesn’t regard the demand as relevant and its response to it is fully negative,” the paper said.

Iran has been offering military advisory support to Syria at the request of the Damascus government, enabling its army to speed up its gains on various fronts against terror groups. This comes as Israel has frequently attacked military targets inside Syria in what is widely viewed as an attempt to prop up the terrorist groups that have been suffering heavy defeats at the hands of Syrian soldiers.

“The main question lingering in mind is that does it make sense for Iran to pull out its forces from Syria after accomplishing its mission in Syria and supporting Syrian forces to retake over 90 percent of the militant-held areas in the country? Or Iran is to pay a price by being sanctioned by the US and its allies?”

Now observers are speculating about Israel’s next move. Having received a repeated negative response from Russia, will Israel move toward an all-out war and deploy its forces to Syria?

Israel has received two heavy defeats by Hezbollah Movement in Lebanon in 2000 and 2006. It also failed to press ahead with its missions in Gaza for at least three wars it imposed on the impoverished enclave. Now, the question is does Israel have any chance in Syria which is backed by its regional ally Iran?

It seems the only option available for Israel is to continue its airstrikes in Syria. But the airstrikes have turned out to be futile because they have failed so far to achieve their main goals: Fleshing out Iranian forces from Syria.

As things stand, Iran’s advisory presence in Syria will not be high on the agenda of talks between the US and Russian leaders’ summit in Helsinki next week. The two leaders are expected to discuss Syria’s situation after ISIS, a situation in which Israel is among the main losers.