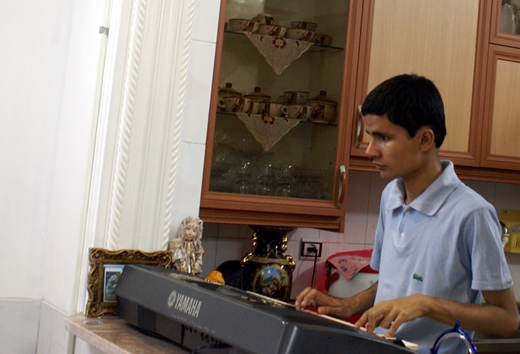 Mohammad Askari was so talented that he found fault with his music teacher in a fourth session of tutoring.

Mohammad Askari was born blind, but visual impairment did nothing to hinder or slow down his praiseworthy climb up the ladder of success.

The following is the translation of part of a report filed by Mehr News Agency about the young man who hails from Bafgh, in Yazd Province:

Mohammad’s father says, “I remember he memorized whatever he heard. When Mohammad attended school, the father-like kindness of his teachers instilled a sense of self-belief into my son and helped him develop a strong liking for learning.”

For eight consecutive years, he finished at the top of the class. When he was in middle school, he developed an interest in music and began to learn how to play keyboards. He was so talented that he even found fault with his music teacher during a fourth session of tutoring.

Admitting to his mistake, the music teacher told Mohammad’s brother that his trainee was so talented that he could play any note by ear and did not need training.

In the university entrance exam, among all but one million participants, Mohammad finished 606th in the nationwide ranking.

He always looks up to two people: His teacher, the late Mazloumi, and Louis Braille [the French inventor of the system of reading and writing for the blind who opened up a new horizon for the visually-impaired throughout the world].

He harbors lofty ambitions and has been making plans to fulfill them ever since he was in high school.

One of his greatest wishes is to write a book for the visually-impaired across the world in Persian, English and Arabic to let them know that disability does not constitute inability and that where there’s a will there’s a way.

Mohammad Askari says he owes his success in life and education to the support and guidelines of his parents, siblings and family.