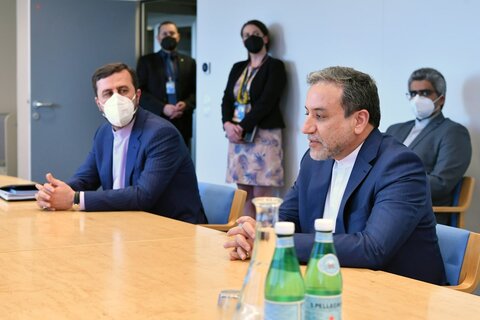 A senior Iranian diplomat has described as positive the atmosphere of the recent talks held in Vienna among members of the joint commission of the 2015 nuclear deal, officially known as the Joint Comprehensive Plan of Action (JCPOA), but says there is a bumpy road ahead.

“It was a busy week. Back-to-back consultations were going on between all sides,” said Deputy Foreign Minister for Political Affairs Abbas Araqchi.

“We have separate meetings with the three European countries as well as Russia and China, which helped move forward with the negotiations,” he told the state TV on Friday.

“I can say we are on track, but there is a rocky road ahead,” Araqchi noted.

“It is difficult. It needs work. The United States needs strong willpower to decide to lift its sanctions. We hope it will be fruitful,” he added.

The Iranian official highlighted that talks are being held amid the COVID-19 pandemic.

“These countries have come together for such an important discussion in Vienna at a time when the city is under full lockdown due to the coronavirus, and specific arrangements and health protocols are in place,” he said.

“This indicates the countries’ determination to revive the JCPOA,” he said.

He underlined members of the JCPOA Joint Commission had a positive spirit and were seriously determined to achieve a result during the talks.

“The climate of the negotiations is constructive and positive. We have moved forward somehow, but we cannot say for sure that talks will produce results,” Araqchi said.

“There are many problems in the way, but we have not lost our hope,” he said.

“It was decided that the negotiating teams return to their respective capitals and stay there for a few days for further consultations,” the top diplomat explained.

“We will probably resume talks next week,” he said.