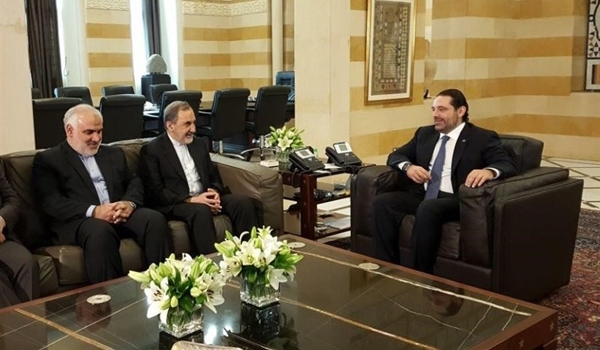 Ali Akbar Velayati, an international adviser to Leader of the Islamic Revolution, dismissed as false claims made by Lebanon’s resigned prime minister Saad al-Hariri about their recent meeting in the Arab country.

Speaking to reporters in Tehran on Tuesday, Velayati pointed to his meeting with Hariri in Beirut one day before his shock resignation and said despite Hariri’s claims, the talks were not “tough, violent or involving threats”.

“Mr. Hariri said that during the meeting he had with me, he called on (Iran) not to interfere in the internal affairs of Lebanon,” Velayati said, adding that Hariri did not make such remarks at all.

It became clear that his remarks have been made under the influence of Saudis, who are not willing to see Lebanon in peace, having friendly relations with Iran, the top official said.

Velayati also said that in the meeting, Hariri tried to play the role of a mediator between Tehran and Riyadh.

He expressed the hope that Hariri would return to his post soon.

Hariri, announced his resignation in a televised statement from Riyadh on November 4, citing many reasons, including the security situation in Lebanon.

He also said he sensed a plot being hatched against his life. Hariri blamed interference in Lebanon by Iran and Hezbollah Resistance Movement for his decision to quit, an allegation the two have repeatedly denied.

Reports say the Saudi regime had ordered Hariri to resign in an effort to destabilize Lebanon.

Saad Hariri is the son of former Lebanese prime minister Rafiq Hariri, who was assassinated in 2005. Hariri has also been the leader of the Future Movement party since 2005.