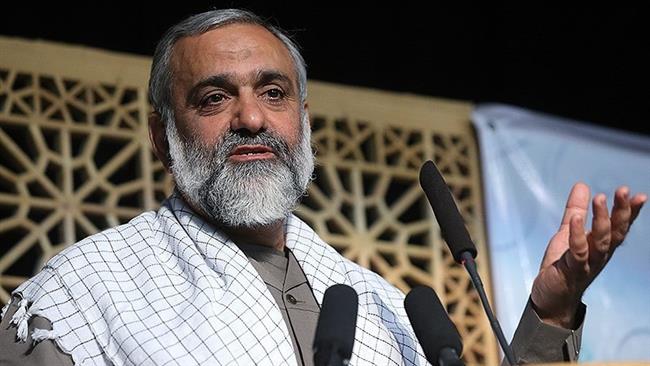 The chief of Iran's Basij (volunteer forces) Brigadier General, Mohammad Reza Naqdi, says Tehran must not lose focus of its main enemy, namely the US, warning that Washington seeks to downgrade the stature of the Islamic Republic's struggles to Riyadh's levels.

“The US’s objective is to trigger conflict in the region and engage us with Saudi Arabia. We should not be deceived,” he added.

Naqdi said the US is the root cause of all “acts of mischief” against Iran, adding that Washington is behind Riyadh’s execution of top cleric Sheikh Nimr al-Nimr and attacks on the Saudi embassy in Tehran.

“The purpose of Sheikh Nimr’s execution and attacks on the Saudi embassy [in Tehran] was to pave the way for the advancement of the US policies in the region,” he said.

Naqdi noted that the US is doing its utmost to infiltrate Iran, saying that Washington is training terrorists and arming them along Iran’s eastern and western borders.

The general’s remarks came amid growing criticism of Saudi Arabia following the January 2 execution of Nimr, who was a vocal critic of Riyadh’s policies, alongside 46 other people. The execution provoked global popular backlash, including in Iran.