US Threat Opportunity for Iran, Venezuela to Boost Ties 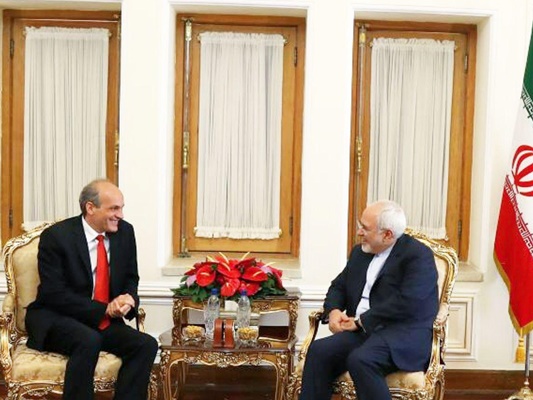 Venezuelan Minister of Planning Ricardo José Menéndez Prieto says the US pressure on Iran and Venezuela should be used as an opportunity to expand Tehran-Caracas bilateral ties.

In a Saturday meeting with Iranian Foreign Minister Mohammad Javad Zarif, Menéndez Prieto expressed gratitude to Iran for supporting his country in the face of foreign pressure.

He referred to Washington’s threats and pressure against his country, and appreciated Tehran’s backing for Caracas.

The official said Iran offers considerable support to Venezuela in the face of unilateral foreign pressure and sanctions, adding his country would like to draw on Iran’s experience in tackling sanctions.

He said Iran and Venezuela should use US threats and pressure as an opportunity to further boost mutual relations. The official underlined that Venezuela will always stand by Iran.

He also said he was pleased to have attended the swearing-in ceremony of President Hassan Rouhani.

Zarif, in turn, said Tehran has always supported the demands of the Venezuelan government and people, expressing the hope that Caracas would be able to restore stability and tranquility to the country through prudence.

“The Americans think sanctions are an asset they can use, and hence, they recently slapped sanctions against Iran and Russia. They have been imposing sanctions on us for 35 years now. In fact, some of the progress we have made in different economic and technological areas has been due to these very sanctions and our people’s resistance against them,” said Zarif.

The Iranian foreign minister noted that the most important reason why Iran has managed to counter sanctions has been reliance on domestic potential and people’s potentialities.

“The people are the driving force behind economic progress and development,” said Zarif.

“With reliance on people, you can hold talks with the world from a position of power,” he added.

The Iranian foreign minister welcomed promotion of mutual cooperation in the oil sector while saying Iran is ready to share with Venezuela its experience in tackling sanctions.

“Also within the framework of the Non-Aligned Movement, the Islamic Republic of Iran, as a member of the movement’s Troika, is ready to work with Venezuela, which currently holds the rotating presidency of the movement, to help it counter the illegal sanctions,” Zarif said.