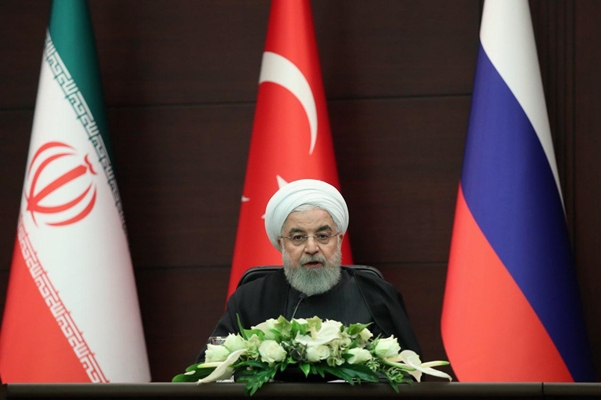 President Hassan Rouhani says the United States pursues dangerous objectives by maintaining its presence in Syria and seeks to help terrorists there.

“The US intends to disintegrate Syria, which is not acceptable for the regional countries, especially we three countries,” said Rouhani in a joint press conference with his Russian and Turkish counterparts Vladimir Putin and Recep Tayyip Erdoğan in Ankara.

“The United States’ ill intention is clear as it has donated part of Syrian soil, i.e., the Golan Heights, to an aggressor (Israel); this is one of strange historical matters that a country, without any legal permission, donates the territory of an occupied country to an aggressor!” said President Rouhani.

“In addition to these US moves, Israel’s continued interference on a daily basis and the bombardment of innocent people in Syria and of the country’s infrastructure run counter to Syria’s national sovereignty,” said the Iranian president.

He noted Syrian people have been suffering at the hands of terrorists, “and all of us know whose money supported these terrorists and who is giving them money today and who has supplied them with arms, which resulted in the killing of so many innocent people in Syria.”

President Rouhani also underlined the need for Syrian refugees to return to their homeland.

“We should make the whole Syria safe, so that Syrian people will be able to return home,” he added.

“We should also contribute to the reconstruction of Syria, and on the humanitarian front, too, we should help dear Syrian people who are suffering from numerous problems and much hardship,” he said.

President Rouhani further expressed satisfaction over the trend of Astana talks, the initiative by Iran, Russia, and Turkey to find a political solution to the Syria crisis.

“The Constitutional Committee is now complete and we hope this political development and constitutional reforms will take place as soon as possible,” he added.