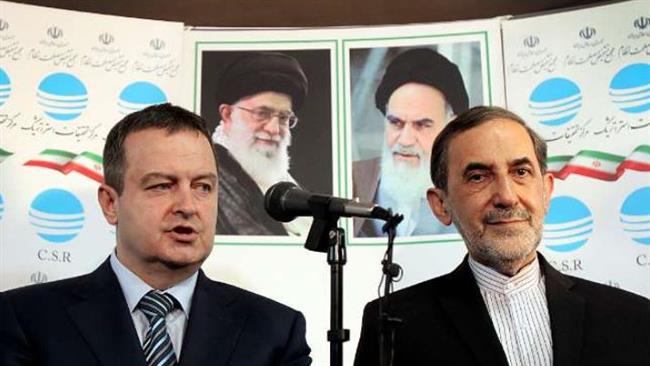 Iran is against any kind of foreign intervention in the internal affairs of Syria, Iraq, Lebanon and Yemen; the US and its allies want to impose their will on the governments of these nations, said Velayati.

The United States and some “reactionary” countries in the Middle East such as Saudi Arabia are trying “to increase their interference” in regional affairs, a senior Iranian official said.

Ali Akbar Velayati, a top advisor to Leader of the Islamic Revolution Ayatollah Seyyed Ali Khamenei, made the remarks on the sidelines of a meeting with Serbia’s Foreign Minister Ivica Dacic in Tehran on Tuesday.

“One of the very odd things the Americans do in the region is to bring a group of terrorists from various countries and train them in Syria’s neighboring countries,” he said, adding, “These terrorists do nothing except killing the oppressed people of Syria, Iraq and Yemen.”

He also told a Press TV correspondent “Iran is against any kind of foreign intervention in internal affairs of Syria, Iraq, Lebanon and Yemen,” adding that the US and its allies want to “impose their will” on the governments of these countries.

Hundreds of thousands of people have been killed in Syria and Iraq due to a deadly crisis created by foreign backed ISIL Takfiri militants in the past few years, while relentless Saudi air raids against Yemen have left thousands of people dead in the impoverished Arab country since late March.