US Policies in Gross Violation of NPT: Iran 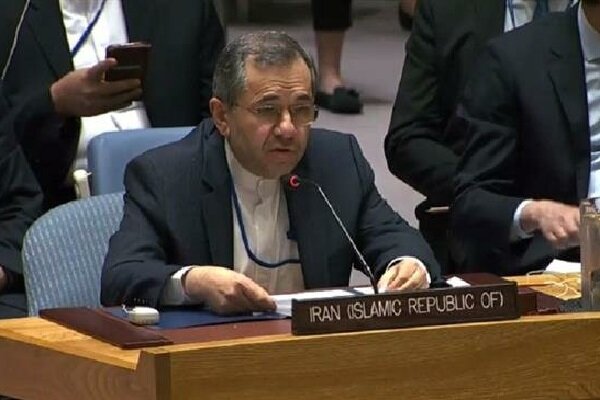 Iran's Ambassador and Permanent Representative to the United Nations said that Washington’s refusal to come under a comprehensive nuclear arms control regime and its intention to resume testing of nuclear weapons is in breach of the Nuclear Non-Proliferation Treaty (NPT).

Making the remarks in the high-level plenary meeting of the United Nations General Assembly to commemorate and promote the International Day against Nuclear Tests on Sep. 9, Majid Takht-Ravanchi said that the latest Nuclear Proliferation Report (NPR) has found that the United States is disinclined to ratify the Comprehensive Nuclear-Test-Ban Treaty and that it “will resume nuclear explosive testing, … including underground nuclear explosive testing.”

“This policy is in gross violation of its explicit legal obligations under the NPT and the unequivocal commitments it has assumed in Review Conferences of the Treaty,” he said.

Here is the full text of the Iranian envoy’s statement:

I thank you for convening this meeting to commemorate the International Day Against Nuclear Tests.

I would also like to commend the efforts of Kazakhstan in proposing and promoting this initiative.

Observance of this international day continuously reminds us of the need for a complete ban on any and all types of nuclear explosions.

This day’s commemoration will be incomplete if we do not recall the fact that most of the nuclear tests’ victims have not been the citizens of countries that have undertaken nuclear tests.

We should also recall the destructive environmental effects of such tests, most of which have been carried out outside the territory of countries conducting them.

Commemorating this day also provides us with an opportunity to review progress made in achieving a universal ban on nuclear explosions and the broader objective of nuclear disarmament.

While we made certain progress in the past, unfortunately, currently there are two alarming races: new nuclear arms race and nuclear arms modernization race.

However, while nuclear-weapon States have the primary responsibility to that end, regrettably, some of them are responsible for the current situation.

This policy is in gross violation of its explicit legal obligations under the NPT and the unequivocal commitments it has assumed in Review Conferences of the Treaty.

Such irresponsible policies, the latest of which is the US withdrawal from the INF Treaty, are detrimental to all international efforts towards nuclear disarmament and non-proliferation, and therefore must come to an end.

Current situation testifies that, no matter how important the voluntary moratoria on nuclear tests are, they cannot substitute for a comprehensive universal and verifiable legally-binding prohibition on all types of nuclear explosions, including in alternative ways.

Through observing this day, we should also redouble our efforts in pursuing the noble objective of the total elimination of nuclear weapons: the only absolute guarantee against the threat or use of these inhumane weapons.

Total elimination of these inhumane weapons is what we owe to ourselves, to our children, to generations to come and to entire humanity.

This is a moral imperative and an explicit responsibility. Let’s remain united, resolute and steadfast and fulfill this responsibility collectively and responsibly.

Iran stands ready to play its role in pursuing this noble objective.

I thank you Madam President