US Not to Gain Domination over Iran Again: President 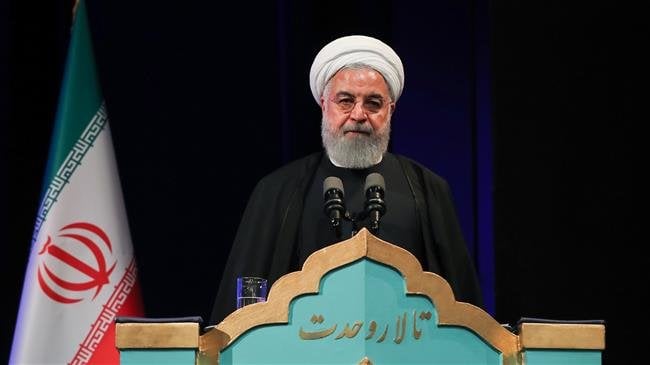 Iranian President Hassan Rouhani has slammed the United States’ hostile attitude toward Iran since the victory of its Islamic Revolution 40 years ago, saying the era of US domination over the Islamic Republic has come to an end.

Rouhani made the remarks in an address to the closing ceremony of the 36th Book of the Year Award and the 26th World Book Award of the Islamic Republic of Iran in Tehran on Tuesday.

He said Europe, the US and some reactionary Arab countries in the region imposed an all-out blockade against Iran but failed to achieve any success due to the Iranian nation’s faith, belief and hope.

The president said the US prevented four “scientists” from traveling to Tehran to receive their book awards and threatened that it would not give them visas to turn back to the United States, in a move that showed they are under sanctions.

“You are using a cheap, non-diplomatic and unacceptable language. You say that you will stay in Iraq to watch Iran, while you had been claiming that you are there to fight terrorism,” the Iranian president said, censuring US President Donald Trump for his recent remarks that he wanted to maintain an “incredible” US military base in Iraq to look “a little bit at Iran”.

He emphasized that neither Iranians nor Iraqis and nor any other individual around the world would accept such logic.

Rouhani said the Iranian nation would never succumb to US demands and would continue its path towards development.

According to media reports, nine foreign guests have been invited from different countries to participate in the 36th Iran’s Book of the Year Award in Tehran, but the Trump administration prevented four individuals living in the United States from traveling to Iran.