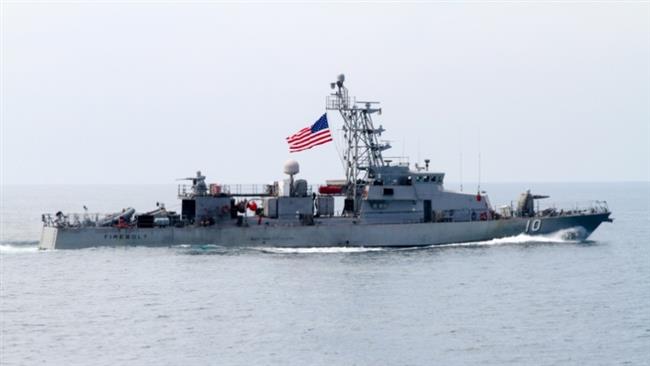 The US Navy has confirmed that one of its warships left an area used by Iran for a naval drill in the Persian Gulf waters after receiving warnings from Iranian forces.

In a Wednesday statement, US Navy Commander Kevin Stephens, however, tried to gloss over the incident and play down the warnings as routine announcements.

“Iran has announced closure areas for live-fire events associated with its exercise,” Stephens said, adding, “This is a common practice for any navy conducting such training at sea.”

Stephens didn’t say why the US warship was in the area if it had been declared as closed to navigation. Instead, he said the US Navy did not consider the warnings to be “orders.”

Earlier in the day, Iran’s Navy Commander Rear Admiral Habibollah Sayyari said the US warship had been warned “once by maritime patrol aircraft and again by the Alborz destroyer.”

The Iranian commander said that the warship “accordingly left the area” near the Strait of Hormuz, adding the vessel was accompanied by patrol aircraft when it was approaching the drill zone.

The ongoing “Velayat 94” exercises are the biggest annual maneuvers by Iran’s Navy, which is assessing its tactics and combat routines through the drills.

Sayyari announced the launch of the tactical stage of the drills on Wednesday morning, during which the marines are planned to simulate the interception of invaders.

Various military vessels and submarines are being used in the exercises held across a large expanse of territorial and international waters covering parts of the Persian Gulf, the Strait of Hormuz, and the Indian Ocean south of Iran.

The communication between Iranian and US forces was the first since 10 US Navy troops were captured by the naval forces of the Islamic Revolution Guards Corps (IRGC) earlier this month. The Americans were shortly released after admitting that they mistakenly drifted into Iranian territorial waters.