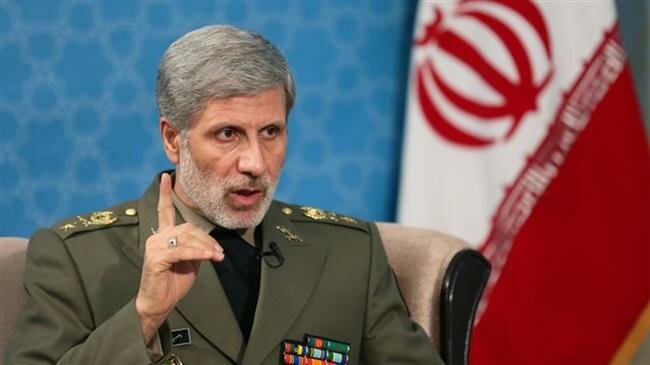 Iran’s defence minister says the presence of foreign forces in the region, especially a US-led coalition which Washington purports would seek to beef up maritime security in the Strait of Hormuz, will only result in insecurity and instability.

Brigadier General Amir Hatami said in phone conversations with his Kuwaiti, Qatari and Omani counterparts that regional security can only be ensured by regional countries.

“We have committed ourselves to [providing] security in the region, especially in the Persian Gulf, Strait of Hormuz and Sea of Oman,” the top general told his opposite numbers on the phone.

“The Islamic Republic of Iran will spare no effort to ensure maritime security in the Persian Gulf, Strait of Hormuz and Sea of Oman, and regional security is the common ground between Iran and other neighbours in the Persian Gulf, and, hence, we believe [regional] security should be provided by the countries in the region, which should enter into constructive talks in that regard,” he noted.

He further blamed Washington for insecurity in the region.

“The US regime is the main contributor to insecurity in the region, and we believe security belongs to all regional countries, and we do not approve of insecurity in or against any country and we believe the region should turn into an arena for foreign forces to throw their weight around,” the top general said.

“A military alliance which the United States seeks to form under the pretext of ensuring shipping security will only further escalate insecurity in the region,” said the defence chief.

He also weighed in on reports suggesting the Israeli regime has expressed willingness to join the US military alliance in the region.

“Such a possible move would be very provocative and could lead to disastrous consequences for the region,” he added.