Leader: Death to US doesn’t mean death to Americans; it means death to US policies 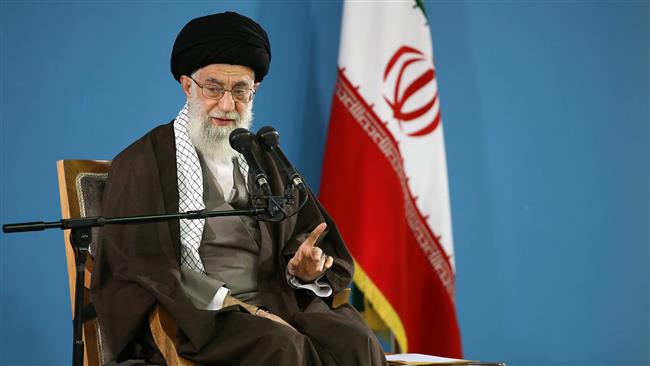 The slogan of ‘Death to America’ does not mean death to the American nation; rather it means death to US policies and arrogance, the Supreme Leader said.

The United States is the main enemy of Iran, Leader of the Islamic Revolution Ayatollah Seyyed Ali Khamenei said in a Tuesday meeting with Iranian students in Tehran.

The meeting came ahead of Aban 13 [November 4] which marks the day when Iranian students took over the US embassy dubbed the “den of espionage,” back in 1979. It has been named National Day of the Fight against Global Arrogance.

Ayatollah Khamenei recalled the 1953 coup d’état against former Iranian Prime Minister Mohammad Mosaddegh, and said the then-premier made a mistake by putting his trust in the US after the oil industry was nationalized.

The Leader said the US has in recent years been involved in having certain individuals conceal its hostile intentions against Iran; the objective is to hide the real intention of the enemy from Iran so foes can harm the country. “Some people do that with evil intentions, some others out of folly.”

Ayatollah Khamenei urged Iranian students to learn lessons from the US embassy takeover, noting that those students who seized the embassy found out that it was a “den of espionage.”

“This shows that the Americans, at the height of the [revolutionary] movement and the victory of the Revolution, were conspiring against the Islamic Republic; that is what America is,” the Leader said.

Taking insignificant internal issues as pretexts, some people forget who the enemy is, the Leader said, adding, “Of course, society is free, and criticism leads to progress; however, you shouldn’t mistake the main enemy for secondary enemies or friends with whom one has disagreements.”

“The main enemy is the one who seeks to destroy the achievement of the Iranian nation,” the Leader of the Islamic Revolution said, adding, “In the negotiations, claiming that they opposed war, the Americans even shed tears in front of cameras. This is the very person who doesn’t bother when Zionists cut to pieces hundreds of children in Gaza. Is crying in front of the camera a sincere act?”

Death to US policies

“The slogan ‘death to America’ is backed by reason and wisdom; and it goes without saying that the slogan does not mean death to the American nation; this slogan means death to US policies, death to arrogance,” the Leader said.

“Our universities were one day a bridge to the West; today, they are ladders to reach high goals; certain people want to destroy this ladder and replace it with that bridge to the West,” Ayatollah Khamenei said, urging alertness by the youth in the face of such attempts.