US Enjoyed 16 Years of Peace in Its 242-Year History: Carter 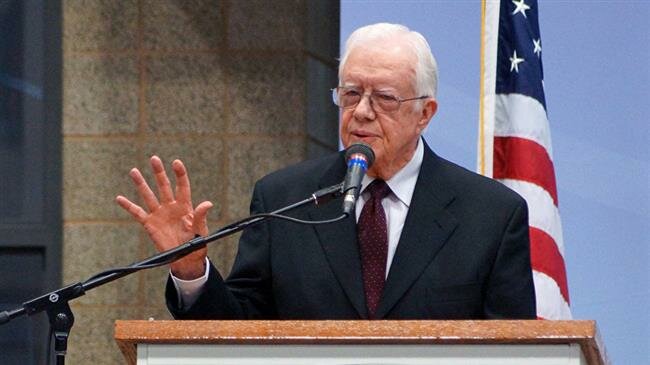 Former US President Jimmy Carter says President Donald Trump has spoken with him about China because the current US leader was worried that Beijing overtaking the US economically, saying America’s endless wars may lead to China superseding the US.

Carter, 94, said Trump called him on Saturday as he spoke during his regular Sunday School lesson at Maranatha Baptist Church in his hometown of Plains, Georgia.

He told the congregation that Trump feared China’s growing economic strength and suggested the president was right to be concerned.

Some experts say China could overtake the US as the world’s largest economy by 2030 if current growth trends continue.

The former Democratic president said China was getting ahead of the US because Washington has been at war with other countries for most of its history.

Carter—who normalized diplomatic relations between Washington and Beijing in 1979—suggested that China’s rapid growth had been facilitated by government investment and helped by peace.

“Since 1979, do you know how many times China has been at war with anybody?” Carter asked. “None. And we have stayed at war.”

He said the US has only enjoyed 16 years of peace in its 242-year history, making the country “the most warlike nation in the history of the world,” Carter said. This is, he said, because of Washington’s tendency to force other nations to “adopt our American principles.”

Carter said that China, in contrast to the US, had made massive economic progress for maintaining peace. “How many miles of high-speed railroad do we have in this country?” he asked.

The US has “wasted, I think, $3 trillion” on military spending. “It’s more than you can imagine. China has not wasted a single penny on war, and that’s why they’re ahead of us. In almost every way.”

“And I think the difference is if you take $3 trillion and put it in American infrastructure you’d probably have $2 trillion leftover. We’d have high-speed railroad. We’d have bridges that aren’t collapsing, we’d have roads that are maintained properly. Our education system would be as good as that of say South Korea or Hong Kong,” Carter told the congregation.

Carter served as the 39th US president from 1977 to 1981. The former president has been particularly critical of the nation’s direction under Trump’s leadership.

Carter was also a tool of the imperialists: Scholar

Commenting on Carter’s remarks, Professor Dennis Etler said,“Although Jimmy Carter is considered one of the more reasonable US presidents he was still a tool of the imperialists running the show.”

“He supported the Shah and alienated whole Iranian nation in doing so, still to this day. And talk about wars, he got the US involved in Afghanistan supporting the Mujahedeen and laid the groundwork for all the wars that followed, so it’s a bit much for him to decry the trillions of dollars wasted as a result, not to mention the millions of those killed, maimed, traumatized and sent into exile,” added Etler, an American political analyst who has a decades-long interest in international affairs.

“No, Carter cannot absolve himself of the guilt he deserves,” Etler told Press TV.

“At least when it comes to China he speaks the truth, if not the whole truth. He knows that China poses no threat to the US that is not of America’s own making,” the analyst noted.