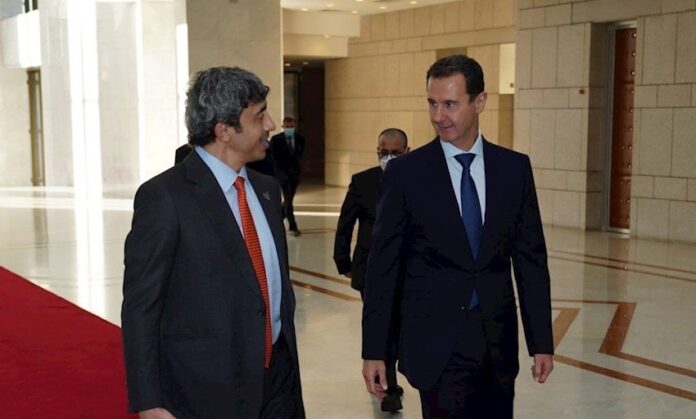 Assad and Bin Zayed also underlined the need for Syria and the UAE to invest in strategic areas and new technologies.

The Syrian president referred to the history of relations between Damascus and Abu Dhabi during the life of Sheikh Zayed Al Nahyan, the former leader of the UAE, and thanked the Persian Gulf country for its logical stance on Syria and its support for the Syrian people.

The Emirati foreign minister also noted that the Syria war affected all Arab countries, saying his country is ready to help restore stability to Syria and help the Syrian people.

Assad and Bin Zayed also called for the continuation of consultations between the two sides over the developments and also challenges facing the region so that the will of regional nations will prevail without the interference of extra-regional countries.

The UAE is among Arab states which have made efforts to normalize ties with Syria.

Syria’s Economic Minister Samir al-Khalil recently visited the UAE and held extensive talks with the country’s investors and economic activists and Syria expatriates there to convince them to invest in Syria. Following the visit, the Syria government agreed to grant a project to build a 400MW power plant using solar energy in the war-ravaged country to an Emirati company.

Most Arab states including the UAE sided with militant groups fighting to topple Assad during the last decade’s war in Syria. The current policy shift on the part of the Arab countries came following Assad’s victory over the militant groups and his recapture of nearly ninety percent of Syria from them.

Iran and Russia were key players in the war and helped Assad in the face of the militancy backed by Western governments including the US and their regional allies such as Saudi Arabia, the UAE and Turkey.