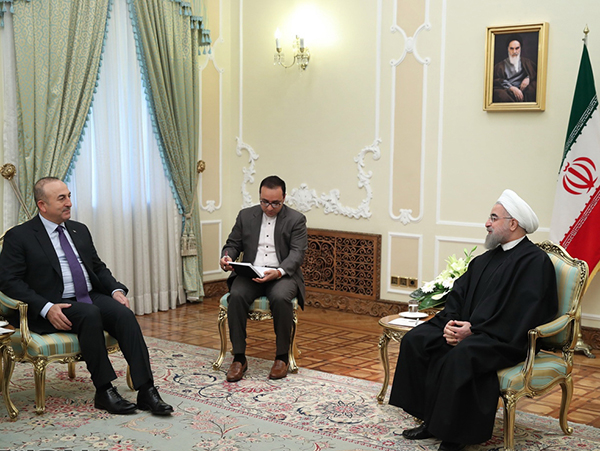 Turkey’s Foreign Minister Mevlut Cavusoglu has arrived in the Iranian capital, Tehran, on a diplomatic visit and has met with President Hassan Rouhani.

Iran and Turkey hold regular consultations on regional issues, notably the crises in Syria and Iraq. While differing on Syria, Ankara and Tehran are both concerned about the threat of terrorism.

Despite their differences, “officials of the two countries are looking for solutions and seeking to draw closer their points of views, especially on Iraq and Syria,” IRNA said.

Iran firmly rallied behind the Turkish government against a July coup attempt in Turkey even as many countries, including Ankara’s own allies, took their time to denounce the subversive act.

Iranian First Vice President Es’haq Jahangiri said during a visit by Turkish Minister of Economy Nihat Zeybekci to Tehran earlier this month that differences of opinion would not prevent Tehran from supporting Ankara in the face of regional threats and instability.

Iran is a main ally of President Bashar al-Assad in Syria’s war on foreign-backed terrorists while Turkey has been one of the key supporters of militants fighting to topple the Syrian government.

Iran has also joined Iraq in criticizing the Turkish military presence in Syria and northern Iraq, which they denounce as a breach of the two Arab countries’ sovereignty.