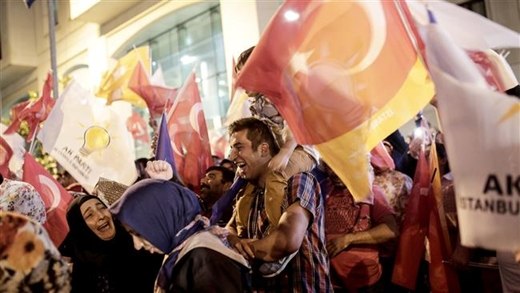 The official results of the 25th Turkish parliamentary general election will be announced “within 11 or 12 days”, the supreme election committee chairman says.

“According to unofficial results, AK Party, CHP, MHP, and HDP have surpassed the 10-percent election threshold,” he said, adding, “The official results will be announced in 11 or 12 days”. The turnout was 86.47 percent, he said.

According to the unofficial results, Turkey’s AKP won its fourth consecutive general election Sunday but failed to gain the majority needed to form a single-party government.

With 99.86 percent of ballots counted, AKP secured 40.79 percent of the vote, giving the party 258 seats in the Grand National Assembly — 18 short of a simple majority.

President Recep Tayyip Erdogan’s AKP party has gained much less than the current 327 and the 330 parliament seats required for calling a referendum on changing the constitution.

Erdogan, who was elected president in August 2014 after over 11 years of serving as prime minister, was confident before the election that he could transform Turkey into a presidential republic.

To achieve this, the ruling party needed to gain 367 seats (two-thirds of the parliament), to easily push for constitutional changes to increase the powers of the president, without popular vote.

The president now holds a largely ceremonial role under the current constitution.